All-Star SG Bradley Beal didn’t need telling he struggled – but stepped up when his teammates relied on him most, scoring six points in the final 6.1 seconds to push the Washington Wizards past a determined Golden State Warriors effort with a 110-107 victory on the road overnight.

Russell Westbrook had 19 points, 14 assists and rebounds for another triple-double (21, league-high), second-year PF Rui Hachimura had 22 points while reserve center Robin Lopez scored a season-high 20. All of those numbers would’ve gone to waste, if not for Beal’s late finale.

“You have a bad game, things aren’t going your way, you always want something to uplift you. That was the moment for me, it definitely boosted some confidence – I was just trying to make a play.”

Westbrook’s three-pointer hit the rim and back out towards the wing, with Lopez tying up Draymond Green as Beal snatched the loose ball before launching a three of his own, contested (and fouled) by Andrew Wiggins in the corner as it flew in.

“That’s what I do!” he shouted, as Hachimura ran over to celebrate a decisive bucket seconds after it seemed all hope was lost, down 107-104.

“It was a big-time shot by a big-time player, especially coming back. The staff told me he had some back tightness and they would keep me updated, I was asking every two minutes. It was great to have him back.”

Promising rookie SF Deni Avdija, 0-of-6 from the field, produced a similarly clutch play on the defensive end as the clock ticked towards zero.

He met Damion Lee under the basket and stole the guard’s attempted corner pass, moments after it became clear he’d block the 28-year-old had he gone through with a dunk attempt. 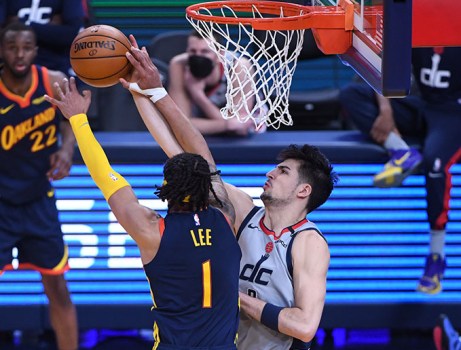 Avdija met Lee at the rim, blocking his attempt in a key defensive play late on

Beal was fouled again and made both free-throws, before Westbrook defended guard Stephen Curry – the game’s leading scorer with 32 – on the final play, with the two-time MVP missed a 28-footer to tie the game at the buzzer. A cruel ending, echoed by Warriors head coach Steve Kerr.

“Three-point lead with under 20 seconds to go, you have to close that game out. Beal made a huge shot, we just couldn’t convert on the next play.

Tough loss – we’re all going to lose sleep tonight. It felt like to me we weren’t ready to go in the first-half. We didn’t pick up our energy until the second, which came back and bit us.”

Despite this morale-boosting win, Washington’s Western Conference road trip doesn’t get any easier: Phoenix Suns in the early hours on Sunday, before matches against the league-leading Utah Jazz and Sacramento Kings to finish their four-game away stint early next week.

As for the Warriors, they host an undermanned Houston Rockets side this weekend – who were blown away by Kawhi Leonard and the Clippers overnight. Despite this preventable loss, Golden State are just three games behind Memphis, currently occupying the eighth seed out West.