Having successfully defended his WBO world middleweight strap with a points win over a spirited Liam Williams display on Saturday night, Demetrius Andrade (30-0, 18 KOs) called for fellow divisional champions to step-up and fight him, as he wants to make unification fights with WBC champion Jermall Charlo and IBF, IBO title-holder Gennadiy Golovkin in particular. 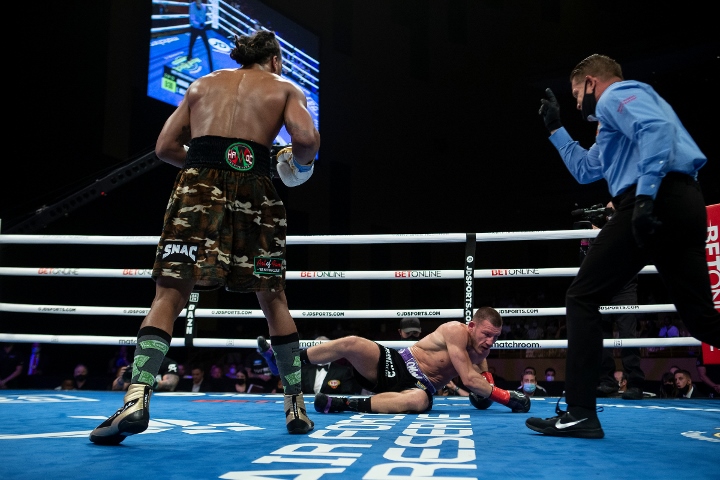 Andrade put Williams down in the second round, though the Welshman recovered and returned fire

Despite scoring a second-round knockdown and enduring a few tricky moments himself, it wasn’t exactly clean to watch but Andrade importantly got the job done – just days after voicing his confusion in media interviews at suggestions that Williams was as tough as critics suggested.

Andrade knocks Williams down in the 2nd! 🔥 pic.twitter.com/lAQjSdAa51

He was proved wrong though and praised the 28-year-old afterwards, while also doubling down on criticism that he’s yet to face any world-class opposition in a division stacked with talent:

“At the end of the day I am an undefeated champion, I shouldn’t have to inspire anyone to get in the ring with me for a belt, [30-0] record and whole lot of money on the table.

Whenever we can sit down and make something happen, I’m willing to risk it all, ready to show that I am the best and to do that, I want to step in with those champions. They have to do the same thing as well.

My hat goes off to Liam all day, a hell of a fighter: tough, strong and that’s the type of fight people want to see me in. He came here to win, didn’t lay down, I got hit with some hard shots too, performed the way I needed, to get the W.”

Even still, there was enough in that performance which would’ve encouraged contenders – and divisional champions – who may be inclined to challenge him.

Mexico’s Jaime Munguía (36-0, 29 KOs) was scheduled to face Maciej Sulecki, then D’Mitrius Ballard this weekend, defending his WBO intercontinental middleweight strap. The 24-year-old’s in-ring return will have to wait until June 19 vs. an opponent TBC after both suffered injuries.

He is ranked #1 by the WBO and WBC, so is among those intrigued by the prospect of facing Boo Boo soon, especially after passing previous tests in his first pair of middleweight bouts last year. 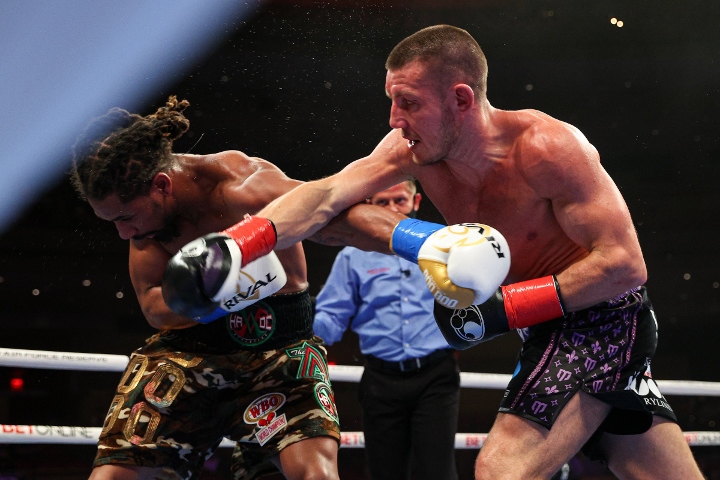 Williams (right) had some success, but it wasn’t enough against a slippery champion

Eddie Hearn, whose company co-promotes Golovkin, was frustrated at GGG’s plans to only fight once this year – against WBA champion Ryota Murata on December 31 in Murata’s native Japan.

All things considered, Golovkin should be more active considering he turned 39 on April 8 and time is of the essence, as far as scheduling big fights are concerned for him personally.

Although he appears determined to book a trilogy bout against Canelo Álvarez, he’ll likely have to wait until 2022 at the earliest considering the super-middleweight’s unification plans.

Poland’s Kamil Szeremeta (20-1, 5 KOs) was no match for him on December 18, with a lopsided matchup ultimately ending after the 31-year-old’s corner retirement following round seven.

During an interview with DAZN’s Chris Mannix, Hearn didn’t mince words and was quoted saying:

“If I’m Golovkin or Jermall Charlo, I’m looking at [Andrade] and going, I can beat him. So, why not step up? Golovkin, a great champion, he’s planning a fight with Murata [on Dec. 31].

We’re in April. He should be looking, speaking to DAZN and us saying, I’ll fight Andrade in the summer and Murata in Japan. Two massive unification fights.

Champions have to fight champions and Demetrius can’t just keep defending his belt. Hurt and tired [in this fight], he [Andrade] can’t make 160 forever.

So if you’re Charlo, Golovkin, let’s do it – make the unification fights. Champions v. champions, that’s what boxing’s about.”

Only time will tell whether these high-quality bouts between champions eventually get made, though the ambition is there and good to see from a fighter already into his prime years.