If there was great pride seeing Bukayo Saka and Emile Smith-Rowe dismantle Slavia Prague to help Arsenal reach the Europa League semi-finals for the third time in four seasons last week, two players in particular shone 24 hours later during FA Youth Cup action and will certainly believe they can be next to emulate them in the first-team proper: sooner rather than later. 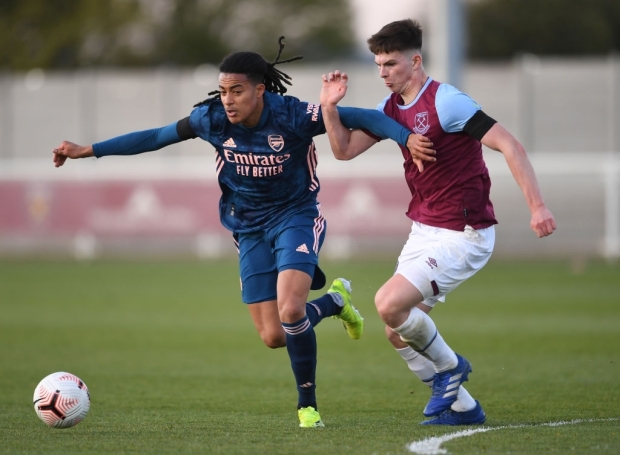 Azeez in action against West Ham last Friday, where he stood out like a sore thumb

After surprising exits against West Brom (Fifth Round, 2018-19) and Blackburn (Quarter-Finals, 2019-20) in successive seasons, Ken Gillard’s crop of Arsenal youngsters have a golden opportunity to win the FA Youth Cup for the first time since 2008-09 this season.

To do so, they must beat Liverpool at Anfield on May 1 – a Reds side hoping they banish the psychological woes of previous teams, with a 0-6 H2H record against their upcoming visitors.

If anything was abundantly clear from last Friday’s win at Rush Green, it was the importance of two players: matchwinner Omari Hutchinson and highly-rated midfielder Miguel Azeez.

Whether they and the collective unit can replicate that performance against much tougher opposition in Liverpool next month, remains to be seen. After all, it wasn’t always plain sailing.

Hammers have chances, but Young Guns take theirs

Despite nervy moments in possession early on, the visitors grew into proceedings and the pair inspired the Young Guns forward against a West Ham side who could’ve easily been ahead with better execution. Midway through the first-half, Hutchinson broke the deadlock with aplomb.

It was a 25-second sequence that highlighted exactly how Gillard set them up to play: the winger pinched Archie Woods’ stray pass in midfield, recycled possession to Azeez while ambling forward out of camera view.

Defender Zane Monlouis fired a nice crossfield pass collected beautifully by Marcelo Flores, who combined with overlapping fullback Brooke Norton-Cuffy to set up Hutchinson on the edge of the area. He took a touch to control, then fired into the bottom corner on his weaker right foot.

Flores, recently back from injury, produced a tireless display off-the-ball and worked well before being replaced after 70 minutes. His deft ability to navigate through tight spaces was admirable, though it felt inevitable that Arsenal’s opener would come down Hutchinson’s side of the pitch.

It was his eighth goal of the season (all competitions), though he – and his teammates – were certainly aware of the opportunities he would have to add more to his tally in this game alone.

Early in the second-half, he watched Khayon Edwards double their lead with a sliding rebound from close-range just moments after his own deflected strike cannoned off the post.

Kai Corbett missed a golden chance to halve the deficit after pouncing on a mistake by Monlouis, while Arsenal continued in their search for a killer goal to effectively end the tie.

Kido Taylor-Hart, whose influence grew in the second-half, had an effort saved while Hutchinson hit the post again after good work from the former. Others continued to threaten.

Hutchinson got their third with a penalty after being hauled down by an off-balance Jamal Baptiste – sent off for denying a goalscoring chance, compounding the 17-year-old’s frustrations.

Disappointed to get knocked out the FAYC last night, unlucky boys 💪🏾 pic.twitter.com/GH5S1H9Fmh

Centre-back Baptiste, who made his first-team debut in late January, signed professional terms two months prior like Hutchinson: highly-regarded among club coaches and fans alike.

However, it was the jet-heeled winger who left his England U18 teammate trailing to recover on the counter-attack, though Taylor-Hart’s incisive pass into him was key in the build-up.

Taylor-Hart (right) grew into the game after a quiet start, making his presence felt in the second-half

The goalmouth action wasn’t over yet. While it’s impressive when done properly, you could see Arsenal’s distribution from defence has a soft underbelly and was eventually exploited late on.

Goalkeeper Ovie Ejeheri slid his attempted pass forward at the feet of West Ham forward Ademipo Odubeko, who reacted quickly to tee up Divin Mubama for a well-earned consolation.

Hutchinson was denied a hat-trick by the post late on, before substitute forward Joel Ideho found himself thwarted seconds later by a point-blank stop from goalkeeper Krisztian Hegyi – the Hungarian keeping the scoreline respectable despite the Young Guns‘ barrage for more goals.

Analysis, looking towards the future

Azeez was assured in possession throughout and plays with a maturity too advanced for youth level, which explains the increasing optimism that he’ll feature more regularly in the first-team.

Hutchinson did an interview feature where he debriefed their 4-1 away win over Blackburn in Round Four, as well as describing the “easiest assist of his life” for Azeez’s wonderstrike:

But there’s more nuance to Azeez’s game than just scoring screamers. He’s undoubtedly among the club’s best academy prospects and already good enough for a loan to a Championship club next season, similar to how England U21 Conor Gallagher (Chelsea) was utilised last term.

Hutchinson meanwhile, is 13 months younger by contrast: he must keep working hard and continue to blossom as the challenges intensify (U18, U23s) before a first-team breakthrough.

If anyone should prove inspirational for him, it’s Bukayo Saka: no loan spell needed, he slotted into an unfamiliar role when called upon as first-team injuries took their toll and took his chance before becoming increasingly important, earning their trust to express himself further forward.

As evidenced by this afternoon’s 2-1 comeback win over Chelsea, this Arsenal crop are talented enough to challenge for and potentially win the U18 Premier League outright – had players not been pushing into the U23s, helping them in their attempts to avoid relegation this term.

It also means being selective with players’ futures: who gets loaned out, while others are better suited to staying and targeting internal squad promotions like impressive former Chelsea fullback Norton-Cuffy, who only turned 17 in January and signed pro terms that month too. 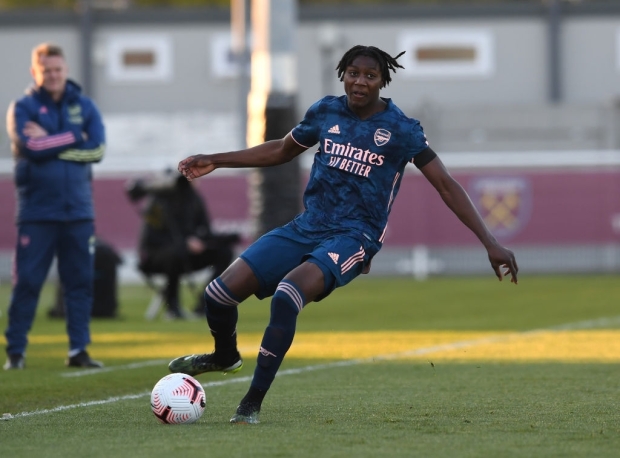 Norton-Cuffy against West Ham, where he was excellent both defensively and going forward

With 14 months left on his existing deal, the England U21 captain is likely to depart permanently this summer while they can still recoup a respectable transfer fee for his services.

That notion has only intensified following news of Folarin Balogun’s four-year contract extension, snubbing interest from abroad – a year younger and with higher stock in comparison.

It’s another warning sign for Reiss Nelson and Joe Willock (on-loan at Newcastle), two Hale End products not given an extended run-in the first-team despite promising signs upon occasion.

After an unsuccessful fight for first-team minutes, Nelson has stagnated over the past year under Arteta’s watch while Willock and Ainsley Maitland-Niles agreed Premier League loans in January.

For different reasons, all four promising players find themselves on the outside looking in

Gabriel Martinelli, who turns 20 in June, was welcomed with open arms by fans and critics after a breakthrough season last term but 2020-21 was disrupted after he endured a serious knee injury.

He’s slowly being eased back into the fold and many feel he’s a long-term answer in the final third, like Saka and Emile Smith-Rowe – who bided his time patiently after a valuable experience with Bundesliga’s RB Leipzig, before more success with Championship side Huddersfield Town.

It’s another reminder that the window of opportunity for academy players to bridge the gap at the highest level is finite, with examples including Isaac Hayden at Newcastle and West Brom’s Semi Ajayi – once you’re no longer the flavour of the month, short memories reign supreme.