A deal and terms on both sides were agreed for Terence Crawford to make his latest WBO welterweight world title defence against all-time great eight-division world champion Manny Pacquiao on June 5 in an ESPN PPV from Saudi Arabia, but money expected by the Abu Dhabi government wasn’t issued by a specific deadline – according to Top Rank boss Bob Arum. 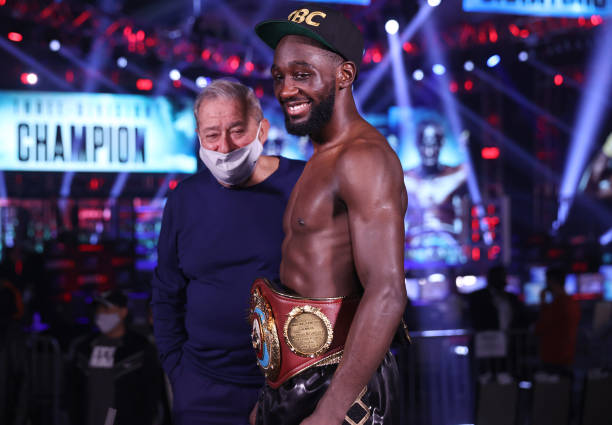 Missed deadlines and no money issued as earlier agreed has proven a stumbling block they simply haven’t managed to navigate past. As quoted by BoxingScene.com, Arum said:

“Look, what happened to us in Abu Dhabi was we had signed contracts, everything, and they were supposed to put up the money. Well, I’ve been waiting two weeks for the money. Nobody put up after promising they would.

Both [boxers] had agreed, we had a signed agreement from this group in Abu Dhabi subject to the money getting put up by the government.”

Arum said COVID-19 would’ve made it virtually impossible to have a large crowd in the UAE for this summer bout, while some trepidation on the investors’ part has something to do with that.

“Why do you think I’m so pessimistic?

What’s happening is they [overseas investors] make these deals, they look good and then somebody says, hey, with Covid, who’s coming? [Because of the pandemic] everybody is counting on money from outside the United States.”

Crawford, whose Top Rank deal expires this coming October, has opponents aplenty who could be his next title defence – including a very vocal number one contender in Shawn Porter (31-3-1), even if talk of a unification bout with Errol Spence Jr has cooled significantly in recent months.

READ: My piece from February – Porter refusing to give up on potential Crawford title bout

He acknowledged it’ll be someone outside the Top Rank stable, after saying:

“We’re gonna have a fight, Crawford will be in the ring by September. We have certain [names] but I’m not going to reveal it until I’ve got it done.”

Arum has been criticised for his inability to find increasingly competitive matchups for Bud, though most of the best divisional contenders are with Premier Boxing Champions (PBC), including WBC and IBF titlist Spence Jr, Keith Thurman, Jessie Vargas and Yordenis Ugas.

Ugas (26-4) was upgraded to the WBA’s super champion status earlier this year, replacing Pacquiao – due to inactivity – but himself has been tentatively slated to face Spence this July.