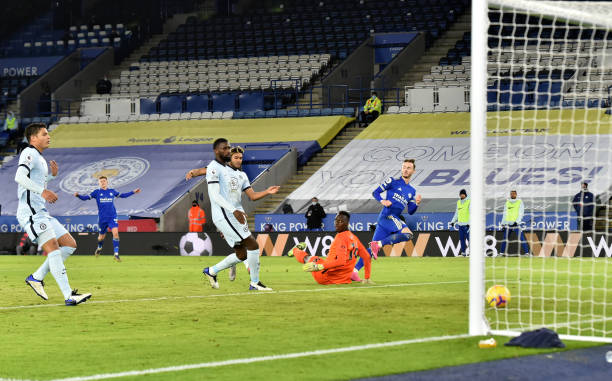 A lot has changed for both sides in the four months since their last meeting, a 2-0 Leicester win propelling them top of the Premier League while confining the Blues to their fifth league defeat in a month under Frank Lampard. Under new management and with a Champions League Final to come on May 29, will Thomas Tuchel’s men prove a step too far for the bullish Foxes here?

First-half goals from Wilfred Ndidi and James Maddison were decisive for Leicester on January 19, soaking up pressure before attacking with poise and potent execution against a sleepwalking Chelsea side who lacked defensive cohesion while big officiating decisions didn’t go their way.

Christian Pulisic had his first-half penalty cancelled and turned into a free-kick on the edge of the box after being fouled by Jonny Evans, while Timo Werner had a late consolation dubiously chalked off following VAR review which didn’t appear to show the German actually was offside:

Despite fielding a youthful side and watching them ease past Luton Town in their fourth-round clash five days later, Lampard’s fate in west London was already decided by then and new boss Tuchel – sacked by PSG before Christmas – has drastically turned their fortunes around in style.

Masking their weaknesses while honing in on the team’s collective strengths with a 3-4-2-1 formation helped keep 19 clean sheets in his first 27 games (all competitions) as head coach.

Despite their results, they’re not faultless yet. Slender defeats by Porto (April 13) and Arsenal this past midweek reinforce that fact, while there’s still a lingering sense that an individual mistake can prove disastrous as now-relegated West Brom (5-2 home defeat on April 3) also highlighted.

Jorginho’s mistake in possession proved costly, as they missed the opportunity to leapfrog Leicester into third place with two games left – including one against Brendan Rodgers’ men – leaving the door open for Liverpool and West Ham who are left hoping for a slip-up by May 23. As for the Foxes, they too have endured a patchy period: being stunned 2-0 at home in the Europa League’s last-32 by Slavia Prague, dropping points against Burnley, West Ham and Southampton, while conceding four at home to Steve Bruce’s volatile Newcastle just last week.

However, they’ve had to navigate past Manchester United and a motivated Southampton side to book their spot in the 140th FA Cup final, so should fancy their chances in a one-off game against a Chelsea team who many critics remain unconvinced about in the final third.

In-front of 21,000 spectators at Wembley, it’s a big stage for Leicester players to shine upon in their fifth attempt at FA Cup glory for the first time.

Their last Final was back in 1969, but Rodgers has supporters believing they can assert themselves as a top-six side capable of more big nights with more consistency long-term.

Chelsea, beaten by an inspired Arsenal side at this juncture twelve months ago, ended Manchester City’s quadruple aspirations in the semi-final – so will be confident they can get their hands on some domestic silverware before the continental dream continues in Porto later this month.

Even after having their momentum stall at home against Arsenal, they can’t overlook the fixture’s importance – the pair duel twice in four days (May 18) as their Premier League tussles resumes midweek.

Leicester will again be without two influential players through long-term injuries – fullback James Justin and winger Harvey Barnes (both knee).

Their Premier-League winning captain Wes Morgan (back) hasn’t played since mid-December, though Evans (foot) should be passed fit to start alongside Wesley Fofana and Caglar Soyuncu in a three-man backline.

In that instance, Timothy Castagne and Ricardo Pereira would feature as wingbacks, while key playmaker James Maddison should slot in ahead of midfield tandem Ndidi and Youri Tielemans.

Jamie Vardy has only scored twice in 2021, but his quality and presence are unquestioned – to partner an in-form Kelechi Iheanacho in attack.

As for Tuchel’s Blues, Mateo Kovacic (thigh) and N’Golo Kante (Achilles) are both listed as doubtful.

Werner was rested in midweek, while Hakim Ziyech – their semi-final matchwinner – should be recalled, likely in place of Pulisic.

Tuchel has already confirmed Kepa Arrizabalaga starts again in goal over Edouard Mendy, after his run of five successive clean sheets was ended courtesy after Jorginho’s freak error in possession on Wednesday.

Prediction: Chelsea 2-1 Leicester – There’s a chance they overlook their opponents here or are undone by an impressive collective display, but the Blues are favourites for a reason.

It’s up to them though, to complete the job with minimal fuss. As Tottenham, Liverpool and Manchester United can all attest, that’s not exactly an easy task – not least on a big stage like this one.