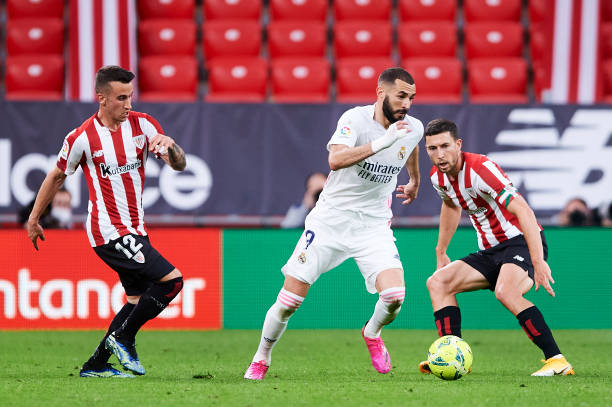 Six years after his last call-up with politics, allegations of racism and an ongoing court case bubbling beneath the surface, Real Madrid striker Karim Benzema has been named in Didier Deschamps’ 26-man France squad for the rescheduled Euro 2020 tournament – which begins in less than a month’s time. He’s expected to lead the line after an excellent season at club level.

Guess who? Benz is back 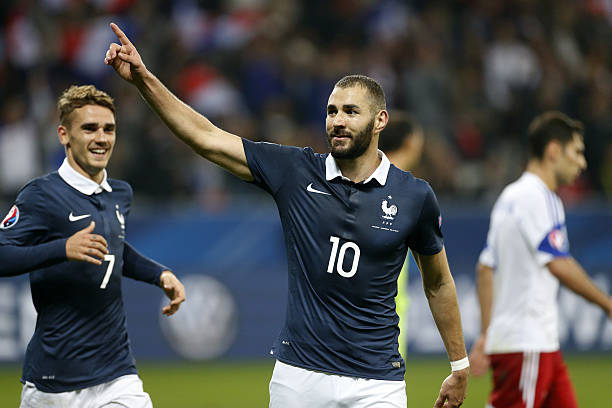 Benzema and Griezmann celebrate the former’s goal during a 6-0 friendly win vs. Armenia in 2015

As reported by ESPN’s Julien Laurens earlier today, Benzema will return to the France fold despite continued tension between himself and Deschamps over recent years surrounding his reported involvement in the Mathieu Valbuena sex tape scandal.

He is accused of pressuring Valbuena into paying blackmailers who threatened to reveal an intimate video which featured the playmaker back in 2015. The 33-year-old, standing trial on the charge of complicity in attempted blackmail this October, denies any wrongdoing.

Having established himself as a key man on the international scene after Deschamps succeeded Laurent Blanc in 2012, Benzema didn’t mince words after Deschamps left him out of the Euro 2016 tournament, where they were beaten finalists.

During an interview with Spanish newspaper Marca that summer, he said the manager bowed to the pressure within a racist part of France by continually freezing him out when fit and available.

Deschamps hadn’t selected Benzema since October the previous year and while revealing he would never forget those comments, always left the door open to a potential reunion in future.

After confirming his 26-man team announcement on TV earlier today, Deschamps said the pair had gone through some reconciliation and it was an important step in the right direction considering how much Benzema’s presence helps strengthen them as an attacking force.

“There were important steps. A very important one. We saw each other. We discussed it at length. After that, I had a long reflection to come to this decision today.

“I will not reveal a word of the discussion, that concerns us both. I needed it, he needed it I have already been confronted with difficult situations, I have always ignored my personal case.

“There were important steps – we saw each other. We discussed it at length, after that, I had a long reflection to come to this decision today.

The French team doesn’t belong to me, even if I am well aware that the responsibility that I have is important, by the choices that I have to make.

There is always competition [for national team places] and by making this choice, it is for the good of the France team, as it always does.”

It’s likely he’ll do the same with Chelsea striker Olivier Giroud too over the next month if he hasn’t done so already, after some rather unflattering comments emerged last year:

Olivier Giroud: "@Benzema comparing me to a go-kart? I laughed. I have no bad feelings about that – my career with France might've been better if we had played together up top, but we will never know." [@telefoot_TF1] pic.twitter.com/cP4B1gUa7d

Benzema’s inclusion means, fitness permitting, he’ll start with Antoine Griezmann and Kylian Mbappe operating either side – either in a 4-3-3 formation or 4-2-3-1. Griezmann has played with Benzema for France before, including in his last cap away in Armenia, when they both scored.

The Barcelona forward publicly voiced his disappointment upon hearing of Benzema’s omission at the time, while Mbappe – part of the under-19s at the Euros five years ago – is also a big fan. 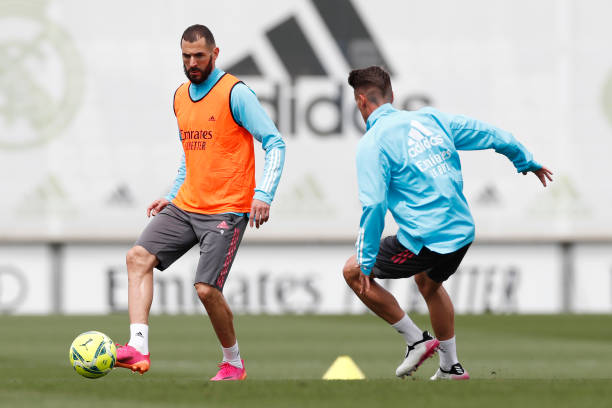 Benzema in club training last week, as the Spanish title race will go down to the wire this season

Benzema, named France’s best player in a foreign league on Sunday, has scored 29 goals and created eight assists in 45 appearances across all competitions this term.

He was one of few Real players who emerged from their Champions League semi-final defeat by Chelsea with much credit and will be hoping they can retain their La Liga crown this weekend.

To do so, they must better Atletico’s result to pip Diego Simeone’s men in a thrilling conclusion to an unprecedented domestic campaign in Spain. Per trusted Italian journalist Fabrizio Romano, he’s also set to enter talks over a one-year contract extension with Los Blancos.

His current deal expires next summer, but the level of consistency and matchwinning displays make their faith in his capability a no-brainer, even as he continues to age.

Euro 2020, suspended a year due to the coronavirus pandemic, begins on June 11. France are in Group F, along with Hungary, Germany and defending champions Portugal.

France’s full squad is as follows: