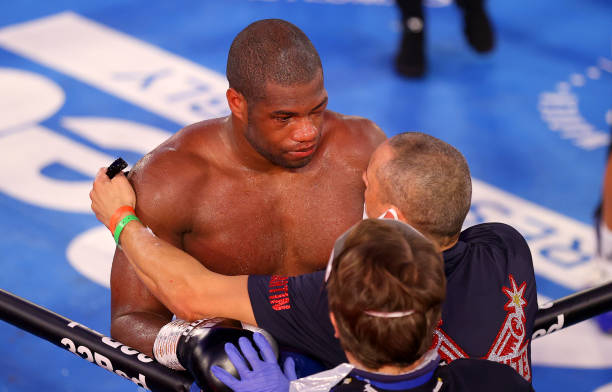 In the most highly-anticipated boxing bout of 2020 – besides Fury-Wilder II pre-pandemic – Dubois suffered a sobering R10 stoppage loss to seasoned compatriot Joe Joyce as the Olympic silver medallist reinforced the importance of experience and ringcraft against a knockout artist.

READ: Piece from November – Worth the wait? Finally, Dubois-Joyce just a week away now

Dubois, winning on two of the three scorecards before he took a knee, sparke debate on whether he quit or saved himself for another day by ending things the way he did. After all, he did sustain serious damage to his left eye – left medial orbital fractures that could’ve proven career-ending.

“When you are a pro and the whole world is getting to see your vulnerabilities, it is interesting, boxing is a proper sport.

You have to ride with it, now I am back again and ready to come back stronger. I’ve looked at it, examined, now ready to iron out my mistakes and put it right.”

Thankfully, doctors have since given him the all-clear to return and he will do so with a new team in tow as he looks to embark on a redemption trail, silencing those who criticised a closely-fought heavyweight main event under Frank Warren’s Queensberry banner seven months ago.

Having split from Martin Bowers, then new trainer Mark Tibbs (other commitments), the 23-year-old has now teamed up with Shane McGuigan, who has the likes of lightweight contender Luke Campbell and new WBO cruiserweight titlist Lawrence Okolie among others in his stable.

Delighted to welcome @DynamiteDubois into my small stable of fighters.

Dinu (20-2, 16 KOs) suffered consecutive knockout defeats to the toughest opposition of his career in Jarrell Miller (November 2018) and heavyweight title challenger Kubrat Pulev (March 2019), but has strung together two TKO victories of his own since (December 2019, Oct. 2020).

The 34-year-old Romanian is ranked #50 for the world’s heavyweights by BoxRec, where the likes of Nathan Gorman (#39) and American prospect Jared Anderson (#33) are comparatively higher.

However, he’s also sitting at a whopping #2 rank by the WBA – one of two sanctioning bodies where former undisputed cruiserweight titlist Oleksandr Usyk (#1) is next in-line for a title shot.

It’s clear Dubois needs acid tests like the Joyce bout proved, but this is an understandable matchup to ease him back into proceedings after such a traumatic experience last time out.

“Not once did I have doubts over whether I would be coming back. Maybe it turned out right that I made the decision I did [to take a knee]. There was a break from everything, but I am used to being in the gym.

I feel like I’m starting my pro career again, an amateur turning pro. That for me is great – a fresh start. There is no better feeling than the beginning.”

While the sentiment is there, it’s important Warren and co don’t make the same mistake they – and others – have done previously in the way they handle Dubois going forward. He could foreseeably cruise past Dinu next month, returning to winning ways in style. Then what?

It’s important they match him up against tough opposition that won’t be overawed by his punching power, and allow him an opportunity to iron out those flaws under new management.

Aware that his cloak of invisibility has disappeared should prove a blessing in disguise: he knows how to lose and should do his utmost to make sure that’s a defining moment in his career.