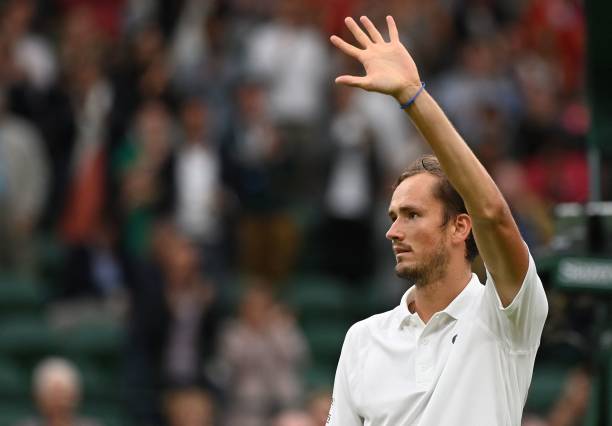 carla gets the memorable farewell she deserved 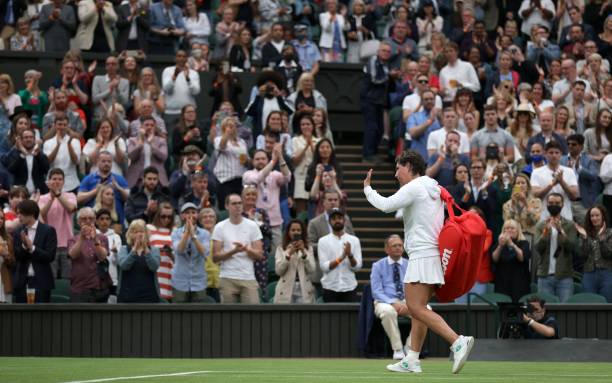 With her mother recording somewhere in the crowd, Carla Suarez Navarro gave it her all

She lapped up the crowd’s warm embrace, just as she promised to do beforehand, and after winning a set two tiebreak with a 7-1 scoreline, there was briefly a sense that the experienced Spaniard – making just her second appearance in two years – would complete a fairytale story.

After announcing last month she was cancer-free following successful chemotherapy on her Hodgkins lymphoma diagnosis, the 32-year-old made a miraculous return to the court in Paris.

Dubious scheduling of her three-set first round loss to Sloane Stephens denied her a proper goodbye at Roland Garros, as no fans were in attendance given their local 9pm curfew rules.

However, she certainly got that here and took a set off Barty, who despite being world number one, remains yet to surpass round four in south-west London after seven previous attempts.

If she’s to do so over this next fortnight, she’ll have to avoid the same lure of fragility that has lingered around her game for a while now – dating back even before losing a very winnable quarter-final to Karolina Muchova in Melbourne four months ago.

There, just as she did here, the Australian stormed ahead with a 6-1 first set lead. But errors arrived and refused to let up, just as her opponent’s level rose with a clear momentum shift too.

Despite still recording more winners than Suarez Navarro, the 25-year-old – who produced a whopping 13 aces – gifted just as many free points as she earned.

Importantly, she refocused ahead of set three and returned to a respectable groove. Otherwise, this would have a markedly different tune on an unforgettable afternoon for Carla, win or lose. 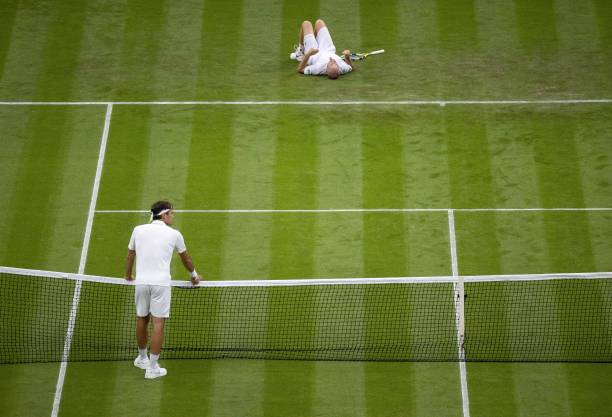 Federer peers over the net, going to check up on Mannarino after he slipped and had an knee injury

As I covered earlier, Federer and Serena found themselves in contrasting circumstances during their respective first-round matches after innocuous but match-ending slips behind the baseline.

Federer is through to round two, having avoided a deciding set against Adrian Mannarino. He’ll play another Frenchman in Richard Gasquet next, who prevailed in four sets vs. Yuichi Sugita – it’ll be the 21st H2H meeting between the pair, one Gasquet has only won twice (2005, 2011).

Given the unpredictable weather, the bulk of Federer’s section are still waiting to conclude their R1 matches – including Britain’s Cam Norrie. The 29th seed lost a first set tiebreak 8-6 to France’s returning Lucas Pouille before fading light saw their matchup paused overnight.

Sam Querrey vs Pablo Carreno Busta is an intriguing R1 encounter in this section, while Italy’s Lorenzo Sonego (#23) is among those waiting to finally take to court tomorrow.

After consecutive first-round Grand Slam exits, Aliaksandra Sasnovich will be £27,000 richer – but the Belarusian didn’t expect to be in round two after Serena charged to a 3-1 first set lead.

15 minutes later, the 27-year-old’s fate was sealed as the American couldn’t continue after slipping awkwardly on her ankle mid-point at the baseline where Mannarino was also injured.

This was a sad, premature ending to another Slam reinforcing the belief that, between injuries and an increased field of contenders, her record-equalling Major window has firmly closed. 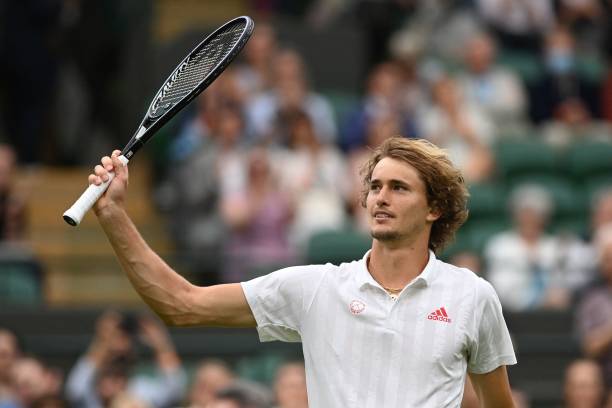 Elsewhere, Alexander Zverev dropped just eight games en route to a comfortable first-round win over against Dutch qualifier Tallon Griekspoor, and next faces America’s Tennys Sandgren – who could prove a banana skin opponent given his historical record against top-10 players.

Should the fourth seed progress unscathed there, he’ll likely play another Stateside opponent.

Taylor Fritz (#31) and US qualifier Brandon Nakashima haven’t played their first-round match yet, while the winner will play Austria’s Dennis Novak or Steve Johnson, also of the US, in R2.

Elsewhere in Zverev’s section, Canada’s Felix Auger-Aliassime (#16) is among those still awaiting his first-round matchup with Brazil’s Thiago Monteiro.

Nick Kyrgios embraced his showmanship to varying degrees of success vs. Ugo Humbert (#21), who he previously outlasted in Melbourne during their second-round Australian Open matchup. 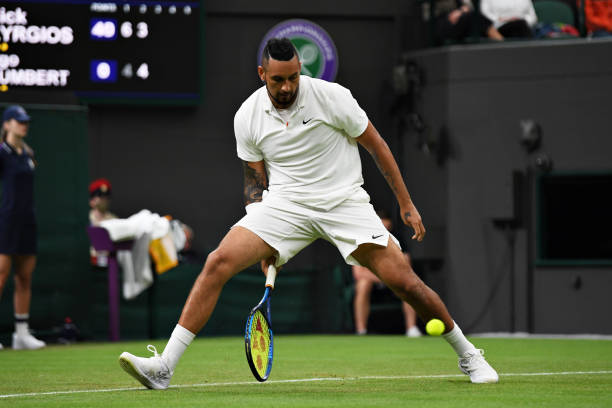 It’s the 26-year-old’s first appearance since his home Grand Slam four months ago and, after racing into a purposeful start, he found himself stifled by a motivated Humbert as the Frenchman raised his level in the next two sets and couldn’t miss for little over an hour.

It wouldn’t last, as momentum shifted Kyrgios’ way with the Court One crowd eager to see a deciding set – cheering each booming ace as they continued to fly off his racquet. If only every service game was like that, eh? Win or lose, Nick has an electricity compelling you to watch.

He’ll play either Spanish wildcard Carlos Alcaraz or lucky loser Yasutaka Uchiyama in round two, hoping for a deep run on another surface that hasn’t been too kind to him in previous years.

Home favourite Daniel Evans (#22) was ecstatic to beat Spanish veteran Feliciano Lopez in straight sets, winning 7-6, 6-2, 7-5 to kick off the day on No. 2 court.

Despite improved tour results, he’s struggling for Grand Slam consistency – losing in the first two rounds at each of the last five tournaments, dating back to last year’s Australian Open.

With that in mind, his section has opened up for a deep run at SW19 here after surprise defeats for French Open finalist Stefanos Tsitsipas and, more recently, 15th seed Alex de Minaur – who was knocked out in four sets by American youngster Sebastian Korda, who turns 21 next week.

Other notable results as kostyuk, gauff and more progress 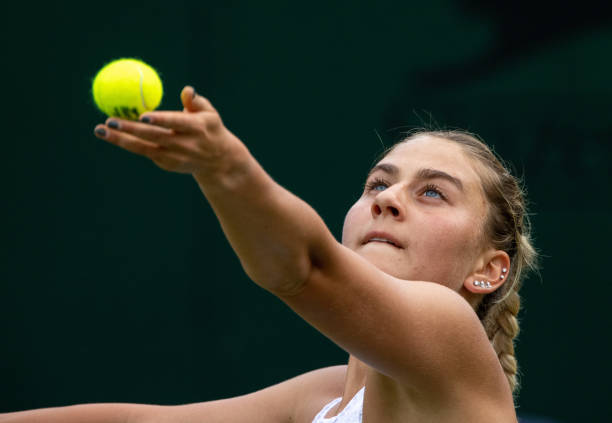 Marta Kostyuk, who turned 19 on Monday, earned a big 6-3, 6-4 win against Kiki Bertens (#17), who recorded an eyewatering 38 unforced errors in a match lasting less than 90 minutes.

Despite an impressive effort, there was to be no first-round surprise for Britain’s Francesca Jones against French Open quarter-finalist Cori Gauff – losing 7-5, 6-4 in one hour 37 minutes.

Venus Williams had to absorb some adversity and recorded eight double faults, but emerged in three sets (7-5, 4-6, 6-3) against Romania’s Mihaela Buzarnescu – who also lost in three sets vs. her younger sister Serena earlier this month at Roland Garros. Ons Jabeur (#21) awaits next.