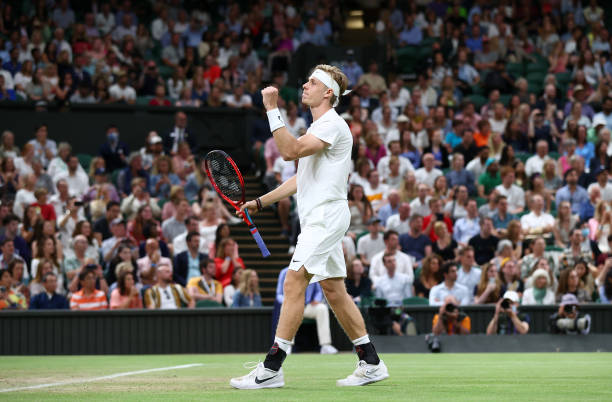 Ons Jabeur recovered from a set down to knock out 2017 Wimbledon titlist Garbine Muguruza, tournament debutant Sebastian Korda rode the wave of momentum well enough to oust Britain’s no. 1 Dan Evans in four sets before another youngster – tenth seed Denis Shapovalov – oozed quality as he ruthlessly ended the hopes of a favourite in Andy Murray on Centre Court. 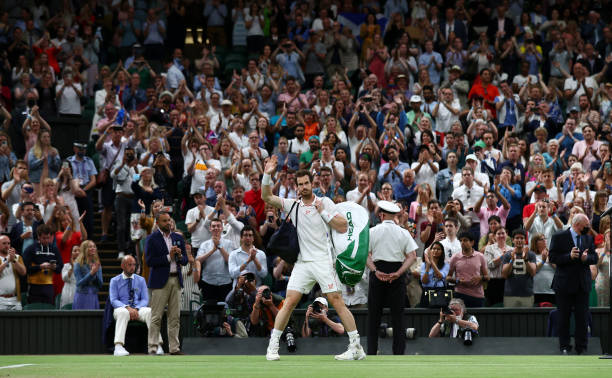 Murray waves goodbye, acknowledging the crowd’s support but lacked the steam to continue his run

After a four-set win over Nikoloz Basilashvili, then clawing his way to victory against German qualifier Oscar Otte in round two, this matchup was always going to be the true acid test.

Would Murray have enough in the tank to embark on a deep run during his return to SW19 after a four-year absence plagued with troublesome injuries and genuine threat of an early retirement?

Shapovalov, who is currently enjoying his career-best performance at these Championships, provided an emphatic answer. It wasn’t the response Centre Court wanted, especially after a brief intermission between sets two and three, but this result was to be expected nonetheless.

The tenth seed, who benefited from a walkover beyond Spain’s Pablo Andújar on Wednesday, is now into round four of a Major for only the third time in his five-year career as a professional.

Although that might be surprising, it’s not as if he’s exactly a newcomer on grass – having beaten Alex de Minaur to win the Junior Grand Slam title here in 2016.

Inconsistency has proven his Achilles heel during previous Slam tournaments to date, but he’s already shown previously that he was capable of big performances and results. Backing them up with continuity appears a challenge that he’s determined to achieve, sooner rather than later.

It’s why victories like these, albeit against an evidently tired Murray, will boost his confidence and should stand him in good stead for the long haul as he gains invaluable experience.

“A dream come true for me, countless years of hard work and practice to one day play on Centre Court… Andy is an inspiration to many including me. I’m just trying to soak everything in, I couldn’t play any better than I did today.”

The 22-year-old recorded 13 aces and 44 winners during a match lasting two hours 30 minutes, though Murray will be disappointed he could only convert one of his nine BPs (11%) across the evening, which never bodes well against someone who plays as quickly as the Canadian does.

2013 Wimbledon champion Marion Bartoli waxed lyrical about the quality of Shapo‘s serving and ability to consistently generate such raw power despite a deceptive frame on commentary, but he’ll need more where that came from against Spain’s Roberto Bautista Agut (#8) in round four.

The 33-year-old, a Wimbledon semi-finalist two years ago, had to navigate past a tricky test in Germany’s Dominik Koepfer but did precisely that – winning 7-5, 6-1, 7-6. 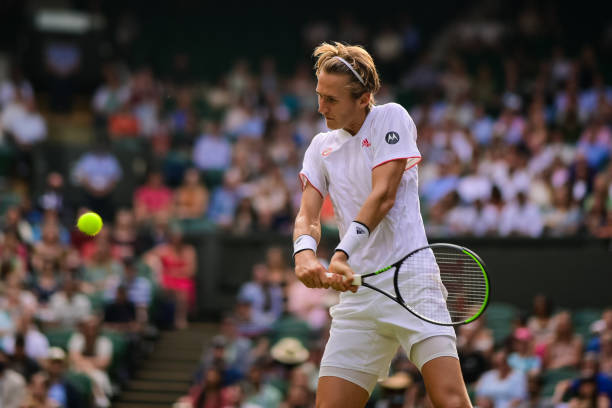 Korda impressed vs. Evans, to book a 21st birthday battle with Khachanov on Monday

Just as you might’ve thought Britain’s number one Dan Evans (#22) was getting back into proceedings, with the scoreline finely poised at one set apiece, he was broken at 3-2 in the third.

Sebastian Korda, the fearless young American making his debut here, didn’t need a second invitation to continue what he’d done earlier, in a competitive affair that had rapidly escalated.

Those numbers appear dishevelled but they illustrate something that Evans couldn’t effectively adjust his game to match: actively winning points during their rallies on a more consistent basis.

Korda tallied 43 unforced errors over the course of this matchup, which was more than twice that of Evans (18), while equally boasting the same advantage in the winners category with 51.

Evans had 21 total – Korda recorded 23 in the first two sets alone. Add to that, 13 aces to the Brit’s zero, and suddenly you start to see why the fearless tournament debutant – who turns 21 on Monday – is so highly-regarded by many within the game. Okay, those errors need ironing out.

But you can’t play the sort of tennis he does and not risk shots veering wide of the lines, flying  out or overplaying. It happens, especially when your movement and ability from the baseline are tested. He had 49 vs. de Minaur, 34 during his straight-sets win over Antoine Hoang and 43 here.

It’s likely he’ll be punished for that high-risk, high-reward style vs. Russia’s Karen Khachanov (#25) as a birthday present next week, unless he does what he did here by snatching an early lead and rising to the occasion during the match’s big points. Frances Tiafoe couldn’t. Can he? 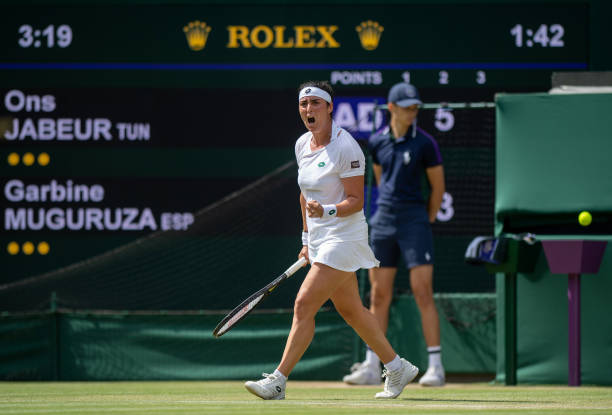 Jabeur roars as she takes the second set 6-3 in 46 minutes, stifling Muguruza’s momentum

Just as Shapovalov and Korda, Ons Jabeur is also enjoying her career-best results at Wimbledon this year. Judging by this display, there’s no reason why that can’t continue next week either.

But the Tunisian, who made history by beating Venus Williams midweek, had some adversity to overcome before continuing an impressive run with a Round of 16 berth firmly in sight vs. Muguruza here. She had chances to make this a smooth ride (2/12 BPs), but failed to convert.

Ultimately dropping the first set 7-5, she then only lost five more games total in a three-set clash lasting just shy of 2h30 as the 26-year-old cleaned up her unforced error count while seizing initiative once the match was there for the taking to start set three. Muguruza had no answers.

Up next? A pivotal clash vs. 2020 French Open champion Iga Swiatek awaits, whose dropped just five games in her last two matches (Vera Zvonareva, Irina-Camelia Begu). From the first ball, Ons cannot afford to squander any half-chances if this run is to continue here, that’s for sure. 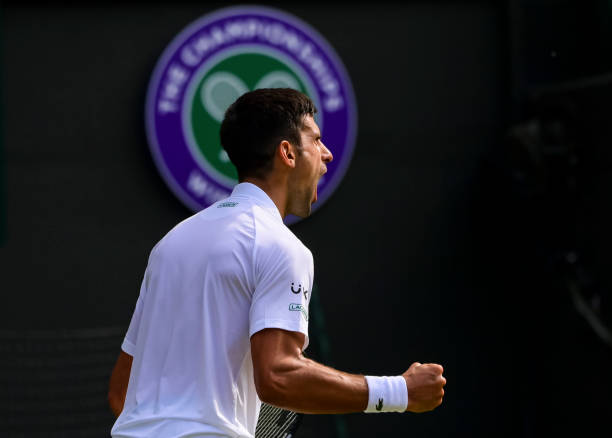 No matter the round, a fired up Djokovic is a dangerous one for his opponents – as Kudla found

The defending champion shared a warm embrace with the American qualifier at the net afterwards, but Novak Djokovic could’ve easily found himself in a world of trouble against a spirited Denis Kudla display that had Court No. 1 unmistakably rooting for the underdog.

Kudla, who recovered from two sets down to beat Spain’s Alejandro Davidovich Fokina (#30) in round one, looked set to force the Serbian into a fourth set and potentially more still as he raced to a 3-0 lead in set three after an early break of the Djokovic serve.

Novak wasn’t exactly playing his best tennis by any means and gifted some free points as Kudla’s play made him uncomfortable, but he relied on what he always does: that dogged defence.

After closing out set one and running away with the second, this could’ve easily been a rout but Kudla had nothing to lose at this stage – playing some beautiful tennis to boot, enjoying himself.

Having saved a match point midway through their tense tiebreak, the 28-year-old would probably wish to replay a few points to execute them better down the stretch – albeit easier said than done against someone with the elasticity and tenacity that the world number one holds.

Other results: Sabalenka and Keys, Kyrgios-Williams in Mixed Doubles 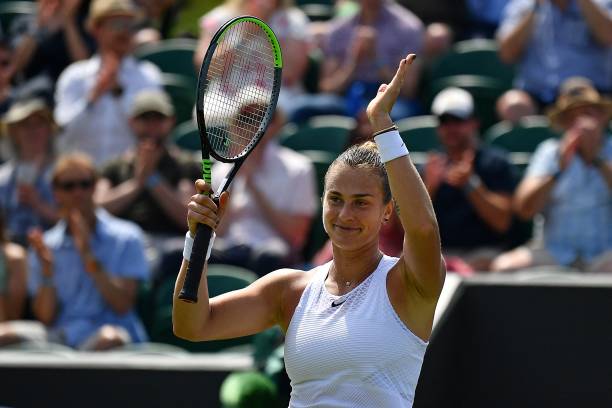 After booking her place in round four, can Sabalenka embark on a deep run here?

Here are some other results and things to note from an eventful Day 5 at Wimbledon: