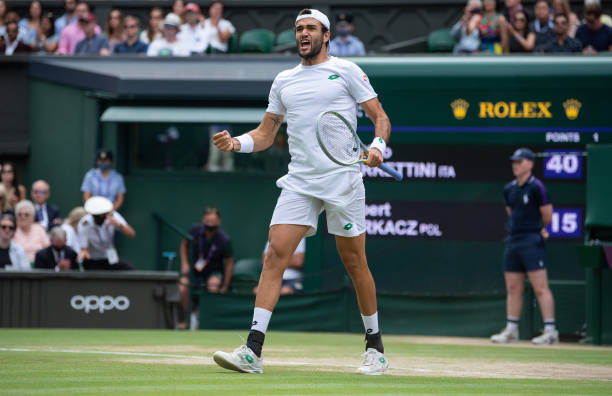 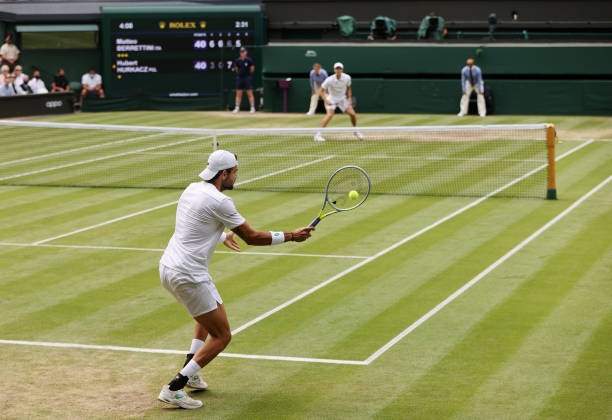 “I have no words, I need a couple hours to understand what happened here. I played a great match, really happy to be here – never dreamed about this as it was just too much. I wish the two [semi-finalists] the best of luck, we’ll see.”

22 aces, an eyewatering 60 winners to Hurkacz’s 27 and it’s easy to see how this match quickly went in the 25-year-old’s favour. The Pole lost ten consecutive games – including a second set bagel – so as he stared down a two-set deficit, found a second wind to keep things competitive.

Despite conceding eight aces in set three, he won 85% of his first serve points (17/20) as the pair exchanged service holds until racing ahead 4-0 in a tiebreak, helped by a timely Berrettini error.

After a brief break between sets, the Italian was noticeably irritated – feeling aggrieved he didn’t win that set – and probably took offence to Hurkacz’s subtle attempts at trying to rattle him.

Whether it was taking time to change his socks and trainers during a changeover, or audibly celebrating every Berrettini miss for a period, he was quickly broken in the first game of set four and couldn’t recover from that position after failing to convert any break point opportunities.

Despite saving a match point to defend his serve and return the pressure Berrettini’s way, there were no more tension for the seventh seed – besides his first and only double-fault of the match – securing his first Grand Slam final, even if father Luca could barely watch from the stands. 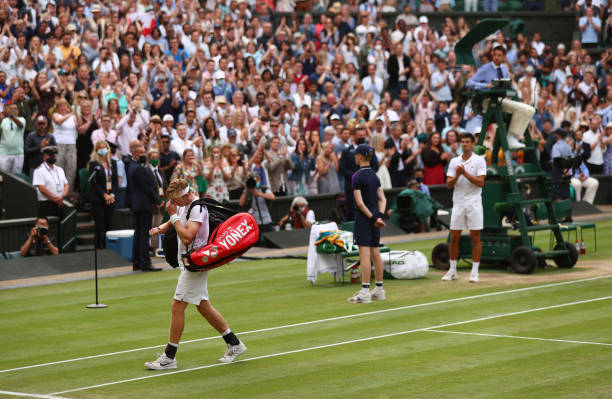 Ever so close: Shapovalov was understandably emotional after losing his first Grand Slam semi-final

Novak Djokovic’s serving struggles returned in stages, but he bided his time brilliantly to repeatedly fend off a spirited Denis Shapovalov effort and reach another Wimbledon Final.

The world no. 1 saved two break points barely ten minutes into the match, but an untimely double fault presented Shapovalov with an advantage to gladly seize.

He did precisely that, helped by a good service hold, and Djokovic’s shaky serving continued as the Canadian suddenly found himself serving for a one-set lead.

The last set Novak lost, was greeted with surprise aplenty on Centre Court in round one against British teenage wildcard Jack Draper. Having lost just two points on serve through the opening set, Shapovalov’s errors increased as Djokovic raised his level with blood in the water.

5-4 quickly turned into a 6-5 deficit for the 22-year-old, who served well enough to take it into a tiebreak. But again, as we’ve become accustomed to, Djokovic’s level rose during the big points.

Shapovalov, for all his guile and enthusiasm, was his own worst enemy as he lost a 7-3 tiebreak – preventable errors at key moments gifting the world’s best player motivation he didn’t need.

He saved all of them, winning five straight points – which ultimately proved a recurring theme – extending the length of their rallies and grinding his way through the match’s trickier moments.

Shapovalov unhappy and rightly so, 1/8 on break point opportunities through the first two sets. 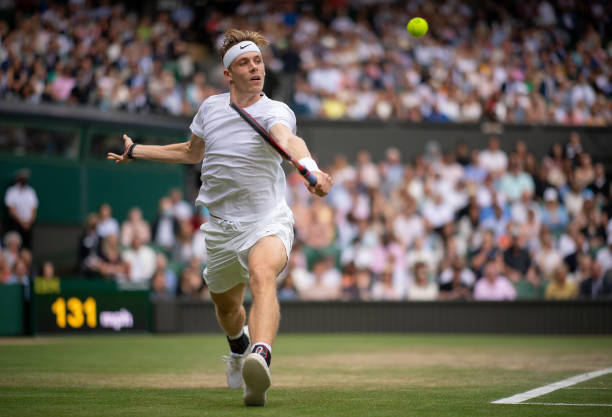 Shapovalov hit 40 winners to Djokovic’s 33, but had more than twice as many unforced errors (36-15)

But playing an extra three-four shots on every point was taking its toll as you could sense his belief was starting to wane ever so slightly, even with the crowd on side and roaring him on.

Djokovic incorporated the serve-and-volley tactic well, kept himself in points he shouldn’t have been with ridiculous shot defence and growing in confidence. Shapovalov double-faulted as Novak didn’t need a second invitation to break before serving out to seal the second set 7-5.

Both had to recover from staring multiple break points down as set three got off to a tense start, Shapovalov holding serve the hard way (three BPs saved) and importantly keeping his spirits up even though the errors and serving issues were lingering in the background, waiting to pop up.

They certainly did, at 5-5 in the third.

Two double-faults and more unforced errors gave Djokovic two break point opportunities, he took the second and roared into his final service game with intent. After an unsuccessful Shapovalov challenge, three match points were on offer and he took the first.

Well deserved applause for Shapovalov, unable to hold back the tears 😥. On to the next one! #Wimbledon pic.twitter.com/28etEZKaWt

“The scoreline doesn’t say enough about the match… he was serving for the first [set], the better player for most of the second and had many chances.

I would like to give him a big round of applause for everything he’s done, today and these few weeks – his first semi-final and he was emotional, we’re gonna see a lot of him in the future.

I’m trying to take out the maximum of my own abilities every single match and see what happens but giving up is never an option. Grand Slams are everything for me, really.

They count the most, I’ve been very privileged to make history in the sport I love, it [making more history] motivates me but at the same time I have to balance it with winning only the next match, only one exists in a few days…”