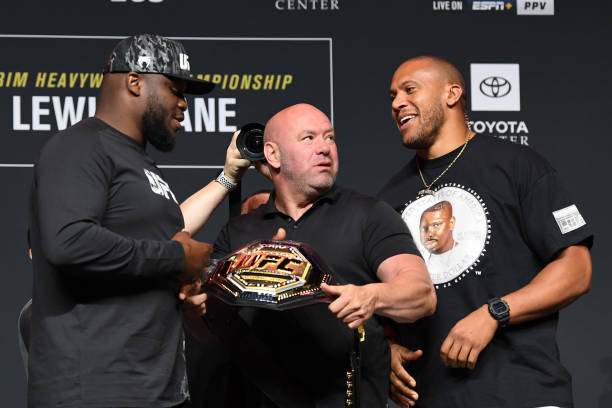 Ahead of their interim heavyweight title fight headliner at this weekend’s UFC 265 PPV, Derrick Lewis (#2) and Ciryl Gane (#3) have previewed an intriguing matchup that could either be a boring 25-minute affair or live up to the billing: one of the pair landing a devastating knockout.

Lewis respects Gane’s credentials, but describes him as boring 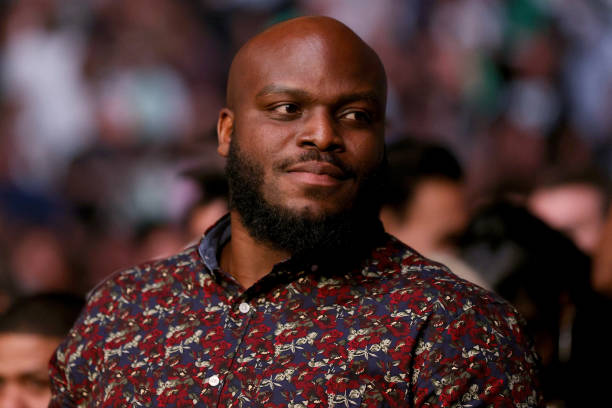 Lewis, pictured in attendance during the UFC 264 PPV last month

Lewis, a one-time title challenger, can claim interim gold on Saturday. To do so, he must snap Ciryl Gane’s 9-0 unbeaten run to start his career – which includes six UFC wins and three finishes.

Lewis returns to his home city of Houston for the first time since UFC 247, where he beat Ilir Latifi (UD, 29-28 x 3) to kick off a main card with two championship fights headlining that event.

During the UFC 265 media day press conference, he stressed his belief that Gane’s style will not make for an entertaining matchup unless the Frenchman actively choses to engage in close.

“It’s not really [that I don’t] have cardio for five rounds, [it won’t] be exciting because he is a boring fighter. He likes to sit back, do a lot of leg kicks and stuff like that, but I really want to have an exciting fight here in my hometown. Win, lose or draw, I want it to be an exciting fight. He’s technical, and that’s good for him. I guess he’s a good fighter, you know. I don’t really keep track of him.”

Lewis, record-holder for most knockouts in UFC heavyweight history (12), expects the raucous reception he receives from supporters at the Toyota Center will motivate him this weekend.

Statistic: In ten previous appearances across his 11-year professional career, Lewis remains unbeaten (8 KO/TKOs, 1 SUB, 1 DEC) when fighting in Houston or the surrounding areas of Texas.

“With the way I fight, I believe so because I fight straight out of emotion whenever I’m in there. It will help me out a lot.” 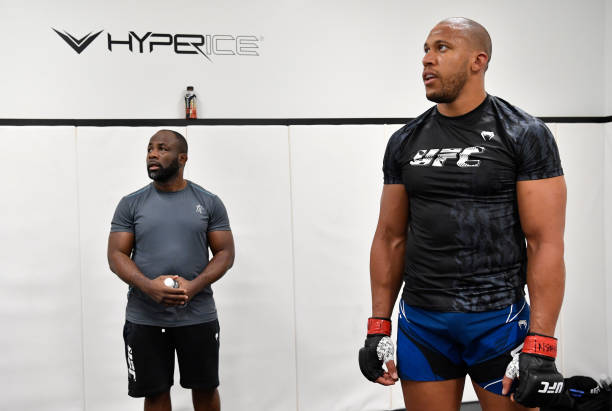 Gane, pictured during his warm-up before comfortably beating Alexander Volkov in late June

Having begun his professional career with three stoppage victories in Quebec, Canada… Gane has ventured to multiple countries and continued winning since joining the UFC two years ago.

He submitted Raphael Pessoa with a first-round arm-triangle choke in Uruguay. Two months later, he earned a $50,000 POTN bonus as a R3 heel hook saw off Don’Tale Mayes in Singapore.

He finished 2019 with a decision win over Tanner Boser in South Korea, before the COVID-19 pandemic temporarily derailed his progress to start 2020 as injury, then the pandemic saw prospective matchups against Shamil Abdurakhimov (#7) and Sergei Pavlovich (#15) shelved.

Despite some controversy surrounding the finish, he ended former champion Junior dos Santos‘ 13-year tenure in the promotion with a second-round TKO win (elbows) at UFC 256.

Although some critics felt underwhelmed by his risk-averse tendencies against Jairzinho Rozenstruik during the 31-year-old’s first headliner in late February, most were purring about his technical abilities as his boxing helped him ease past Alexander Volkov in June.

That leads to a third straight headliner, where he is entering enemy territory this weekend in Lewis’ hometown. He doesn’t appear to mind and is looking forward to the atmosphere.

“This is not a problem for me, I’m comfortable with this situation. I can understand, it’s a sport and they are his fans, but if tomorrow it’s in Paris, then you know. The fans are going to make the fight a little more fun.

The Lewis-Gane winner is expected to fight undisputed champion Francis Ngannou in the near future, though Ciryl knows that Lewis’ punch power is something he can’t afford to look beyond.

“Everybody knows his big strength is his power, and he has a bomb in his hand. So yeah, we worked on it, had some specific partners and yes, the goal was, because the two fights were really close, to maintain my conditioning.”

Statistic: Gane is one of four heavyweights in modern UFC history to start his career 6-0 inside the Octagon, with all three before him (Ngannou, dos Santos and Cain Velasquez) winning gold. 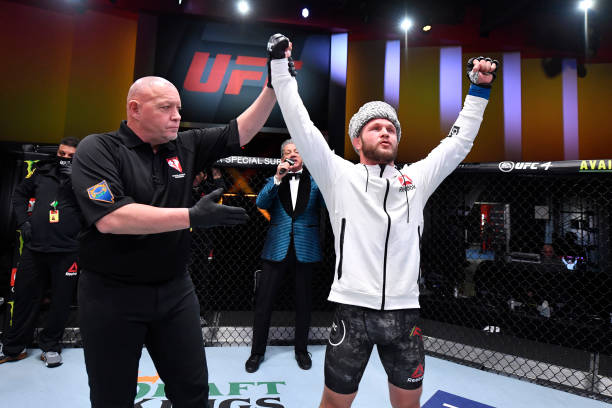