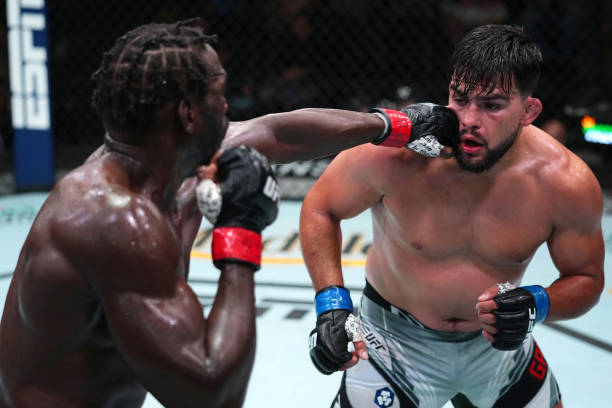 The striking differential between the pair was razor-thin over five rounds, but middleweight contender Jared Cannonier (#3) returned to winning ways vs. Kelvin Gastelum. Prior to this, there was a big win for possible new flyweight title challenger Alexandre Pantoja after lightweight prospect Ignacio Bahamondes’ crazy spinning wheel kick knockout on the prelims. 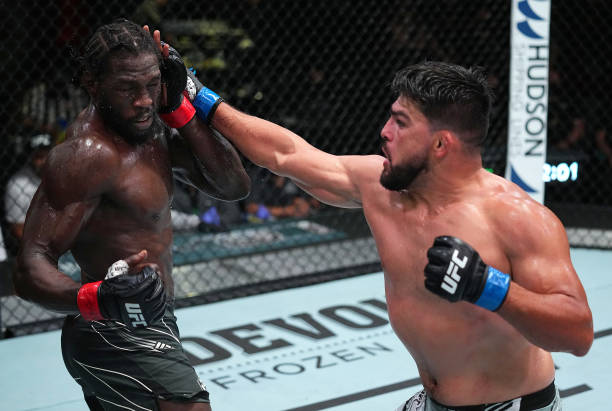 Gastelum sees one of his right-hands blocked by Cannonier, who was more efficient with his striking

Gastelum may have taken to social media afterwards, believing he won, but the overall fight stats and his fifth-round urgency here rather told a well-known story we’ve seen before from him.

Do enough to keep things competitive, but crucially not enough to edge more rounds in the judges’ favour and win a potentially pivotal matchup against a returning fighter that would’ve propelled him into the 185lb division’s top-5 once more.

Now, he’s lost to four of the eight ranked men ahead of him, as well as the champion, all in the space of just 28 months. It’s why many have called for him to drop down to welterweight again.

Better conditioning and adopting more discipline out of his training camps could help him make that cut easier in future than previously, especially considering the broadcast’s desire to showcase Cannonier’s transformation from under-sized heavyweight to jacked middleweight.

Congratulations to Jared Cannonier on a very competitive fight!
Small adjustments and we’re back on top!
Tonight just proved that! We’re very close to being the best in the world.
Almost there & On to the next one!

Cannonier meanwhile, did what he was supposed to. Having revealed a preference to face a higher-ranked opponent while simultaneously respecting Gastelum’s pedigree during fight week, he surprisingly doubled down in his post-fight interview Octagonside with Daniel Cormier.

Cannonier: I'm broke, so I need to fight. Hopefully I get that title shot, but the right name might make me say yes #UFCVegas34

Adesanya-Whittaker 2 hasn’t even been announced yet, so Cannonier will likely face the Paulo Costa (#2) vs Marvin Vettori (#4) winner (October 23) assuming they emerge without any injuries.

Gastelum is 1-5 in his last six fights and while his availability on short-notice against consistently elite contenders is admirable, his goodwill is starting to fade with successive defeats.

The eccentric Sean Strickland (#8) is now among those ahead of him in the rankings and considering the division’s landscape, a welterweight return makes the most sense going forward considering most at 185lbs are unlikely to accept rematches – there’s not much in it for them.

besides that and pantoja’s win, A hit-or-miss main card 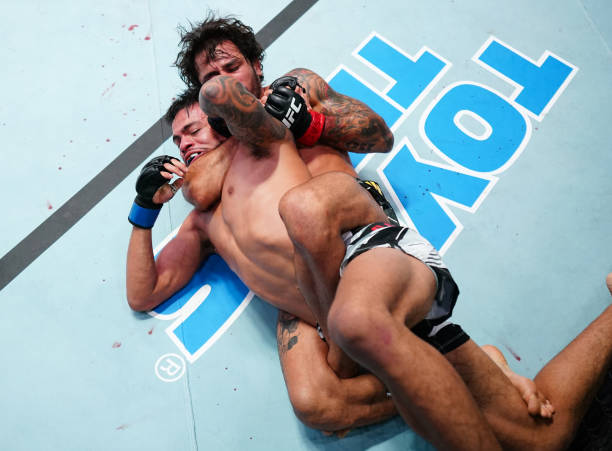 Pantoja certainly made an impression with his R2 submission win, as the champ watched on

Elsewhere, this main card felt underwhelming – maybe because of pacing, scheduling, or that they were essentially battling Manny Pacquiao’s title fight vs. WBA champ Yordenis Ugas.

They missed a trick placing the flyweight fight as the main card opener, given the stakes and who was in attendance, a co-main event slot felt more fitting.

I wrote a piece on Alexandre Pantoja’s chance to skip the title-contending queue and his second-round submission win over Brandon Royval (#6) certainly went some way to doing that.

Then, right on cue, there was this exchange on the broadcast between Pantoja and new 125-lb champion Brandon Moreno:

"I like you Moreno. You know that… But now is my time, Moreno. I see you [in] December."@Pantojamma has two wins over UFC flyweight champion Brandon Moreno and is looking for a third 🏆 #UFCVegas34 pic.twitter.com/w9CV7gV2VF

After suffering a first-round knockout on his UFC debut against Chris Daukaus twelve months ago, heavyweight Parker Porter has racked up successive decision wins – outlasting Chase Sherman on the scorecards (30-27 x2, 29-28).

Austin Hubbard had four takedowns and tallied 66 strikes over 15 minutes, but it wasn’t enough as he was thoroughly outworked en route to suffering a commanding decision loss (30-27 x 3) against lightweight veteran Vinc Pichel. 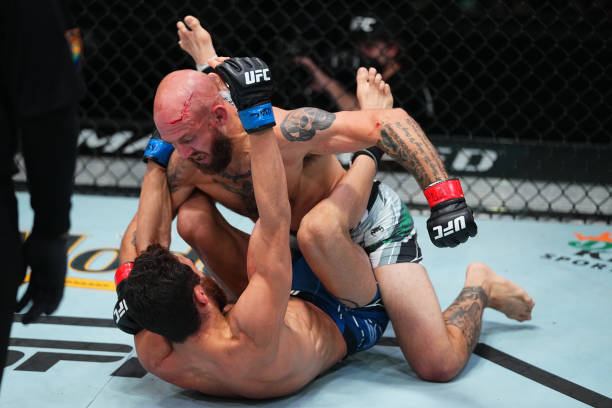 Kelleher (in top position) returned to winning ways after falling short vs. Ricky Simon in February

At featherweight, Austin Lingo narrowly squeezed past Luis Saldana on all three scorecards (29-28 x 3) in the featured prelim. Beforehand, bantamweight Brian Kelleher was dominant vs. Domingo Pilarte (30-27 x 3), and there were four finishes – three in the first round – to boot.

Swedish bantamweight Bea Malecki turns 30 tomorrow but Bad News Barbie will not be in a celebratory mood after suffering her first pro loss in clinical fashion against Josiane Nunes. The Brazilian, making her UFC debut here, repeatedly stung her during their stand-up exchanges.

Light-heavyweight William Knight returned to winning ways and earned a $50,000 POTN bonus too, connecting with a counter left hook that flatlined Fabio Cherant rather emphatically.

Welterweight Ramiz Brahimaj wasted no time getting Sasha Palatnikov to the ground and then set up a rear-naked choke up against the fence, leaving the 32-year-old like a sitting duck.

It’s the second time in five months he’s been submitted – Impa Kasanganay did similar on the Holland-Vettori prelims in April and now others will target his wrestling weaknesses too.

OH MY 😱@jaulabahamondes just added one to his highlight reel 🎞 #UFCVegas34 pic.twitter.com/G8ROEc0Z0h

Bahamondes, a Contender Series signee, lost a split decision against John Makdessi on his debut in April. An impressive finish like this though, is sure to have many more new fans watching his progress as the Chilean – 24 next week – has room aplenty to develop in future.