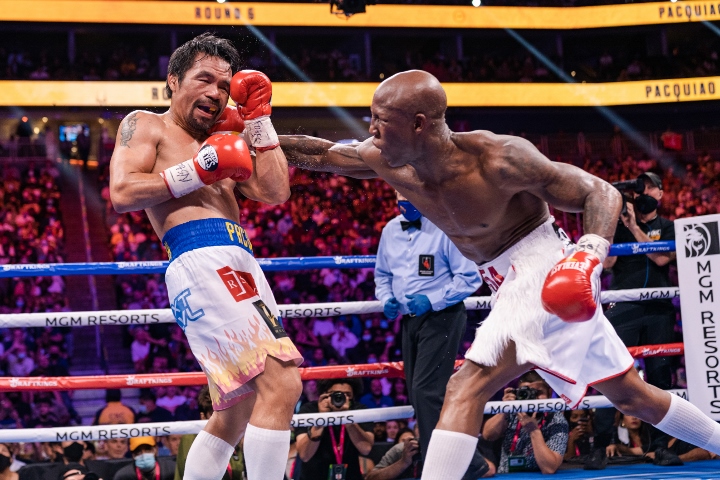 Despite a competitive first-half showing, eight-division world champion Manny Pacquiao could have no complaints last Saturday as WBC welterweight titlist Yordenis Ugas eased past him with a UD victory (115-113, 116-112, 116-112), stepping up on short notice to retain his belt in style. Now, the legendary Filipino has stressed his desire for a rematch. Should he just retire? 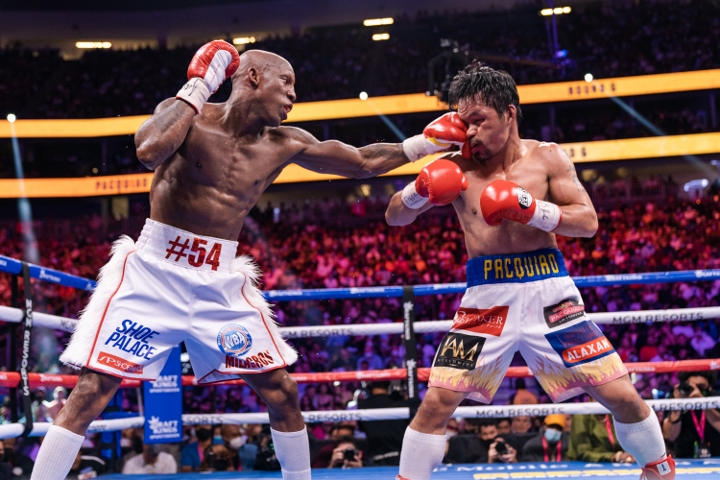 Some say Pac-Man showed his age, while others were simply happy that Ugas validated his status as WBA champion with an accomplished showing against one of the all-time greats.

Yet, three days after suffering the eighth defeat of a 26-year professional career, the 42-year-old’s comments to The Athletic felt more jarring than watching him get old in the ring last Saturday.

“In my entire career, Ugas was one of the easiest opponents – only had one style, and I should’ve been able to easily move away… you’ve seen how I have moved in my fights before, I couldn’t move in this fight, my legs just stopped.

I can come back in January, I will see. I know I can rematch him if I want, just need to tell (PBC founder) Al Haymon, no problem. I will think about it because I can’t believe that one of the easiest opponents I ever faced did that.”

There’s so much that can be unpicked there, but the operative word is should’ve – Pacquiao has long been heralded for his movement and yet couldn’t truly hurt Ugas, despite throwing more than double the Cuban’s punch total through 12 rounds. That should say all you need to know.

It’s why many have wondered how things would’ve unfolded and probably been worse still, had original opponent Errol Spence Jr not sustained an eye injury forcing this late change.

Spence’s injury and questions over his subsequent recovery means a number of things atop the 147-lb division, but WBO champion Terence Crawford will face two-time world titlist Shawn Porter in a mandatory defence of his belt before the year ends – a purse bid is set for next week.

Ugas is more than willing to face Pacquiao again, and why wouldn’t he? After all, both Crawford and Spence had been targeting this matchup for a while and it’s clearly a legacy-defining fight.

Yordenis Ugas: "Many people ask me about Manny Pacquiao's statements that I have been one of his easiest rivals in his career. The only thing I can say is that he goes to his house in peace, he recovers and that I respect him for being one of the best boxers in history."

He’s already beaten the legend on short-notice, you’d expect he would do even more damage on a full camp, and while overlooked pre-fight, many saw this outcome taking shape beforehand.

Porter, who earned a split decision win over Ugas in March 2019 for the WBC welterweight title, was asked to rate the Cuban’s ability, chances to win and said this on his podcast beforehand:

“Ugas has a lot of strength but didn’t strike me as the guy with enough significant power that you would consider [compared to Spence/Thurman].

However, he has enough strength and physicality to force Manny into some corners and situations he doesn’t want to be in. It has to happen in the latter part of the fight, 8-12, where he can impose his will.

This fight is going to become interesting after six rounds. Manny will slow down, try to find more smaller spurts to steal rounds and as long as Ugas has got his respect, it becomes a really good fight.”

He didn’t know it at the time, but watching everything unfold as a commentator on the Showtime PPV broadcast, Porter’s comments proved prophetic.

Pacquiao threw 56 punches in round one alone without much genuine accuracy, infrequently achieving success by charging forward with four-punch combos which didn’t all land:

Pacquiao expended energy aplenty with multiple punch combos, which were fleeting and wore on him

You couldn’t fault his effort nor output as the fight wore on, but that alone doesn’t justify winning at world level – no matter how much some on commentary duty tried to credit his work.

Ugas’ jab continued to land and whenever Pacquiao unloaded with flurries, the 35-year-old pushed him off to create separation wherever possible, keeping things where he wanted them.

“I told you, I am the WBA champion and showed it. My trainer, Ismael Salas, and I had a plan – move him around; use the jab, keep him off balance. The right hand was a shot I had planned to use, it kept working so I kept using it.”

With a four-inch height advantage and similiar reach differentials, 54 Milagros took Pacquiao’s best punches before countering well, setting up multiple-punch combos to the head and body:

Pacquiao had some success in spurts like here, but it wasn’t enough to mask his overall inefficiency

Ugas took control with his jab and attacked the body well, with Pacquiao unable to evade

He outworked him as the rounds wore on and even those pulling for a Pacquiao victory had to cede defeat, with Ugas taking command with a few brutal-looking exchanges like these:

There will be many believing he can continue and that’s fair enough. He shouldn’t feel obliged to do so though and frankly, after a display like that, the decision should be taken out of his hands.

Former light-heavyweight world champion Andre Ward retired before he got old (33) but there’s no shame in calling it a day, or altering the level of competition that gets you out to compete.

Sure we said the same after the Jeff Horn loss tbh! He goes away for a bit and comes back looking amazingly refreshed! From the Horn loss he comes back and stops big punching Matthysse! Outpoints Broner and beats Thurman! 👀 You can never write him completely off.

You just have to look at Manny’s former foe Floyd Mayweather – still earning multi-million dollar paydays, with minimal risk of potential damage in 2021.

Pacquiao has too much pride to engage in that and as such, should retire before suffering more punishment and instead focus on launching his 2022 presidential campaign in the Philippines.