Liverpool and Chelsea’s unbeaten start to the new Premier League season continued on Saturday night with a 1-1 draw at Anfield, but this latest meeting wasn’t without controversy and tempers flaring on both sides after Reece James’ contentious dismissal in first-half stoppage-time, changing the complexion of an entertaining clash between two title hopefuls. 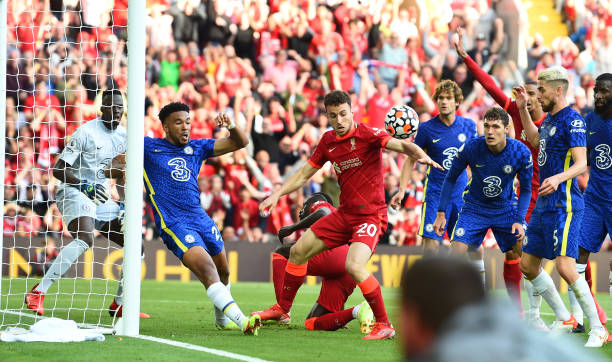 After further review, James was sent off for handball and Liverpool awarded a stoppage-time penalty

You never want a match to be so heavily influenced by an officiating decision, but even before referee Anthony Taylor was told in his ear to go have a look at the VAR monitor pitchside, this frenetic pace felt too volatile to last without one major incident of sorts.

Fabinho rode his luck early on, avoiding so much as a booking after committing a pair of cynical challenges before the 15-minute mark.

Sadio Mane flew in firmly on Reece James, just seconds after the first whistle, with the Anfield crowd roaring their support. There was more where that came from, they expected.

But no-one could’ve foreseen what unfolded in first-half stoppage-time.

James, who teed up Kai Havertz’ headed opener 25 minutes earlier, was dismissed for what was described as deliberate handball to deny Mane’s toe-poke effort on the goalline.

Triple jeopardy for the England international, who was bemused by the decision. His teammates were furious, only worsened as Mohamed Salah sent Edouard Mendy the wrong way to equalise.

Perhaps Taylor overcompensated for adopting a laissez faire attitude earlier on, having appeared to only view a still – as opposed to the full replay – on said monitor before making his decision.

But, either way you interpret the decision personally, the fact remains that this game was turned upside down by the ambiguity of a handball rule many don’t appear to fully understand.

Taylor watched it in real-time from a reasonable distance away, was happy to play on, and only deviated away from his original stance once told otherwise. The ball struck his thigh and flicked in, during that split second frame, James’ arm goes up – a reflexive move – not deliberate.

Azpilicueta: "Harsh. I feel sorry for Reece. The referee got advice from VAR to give it. He went to the screen to watch one replay.

"We got the double punishment, red card and a penalty – and two yellow cards in the same action. We were angry."#CFC #LFC #LIVCHE 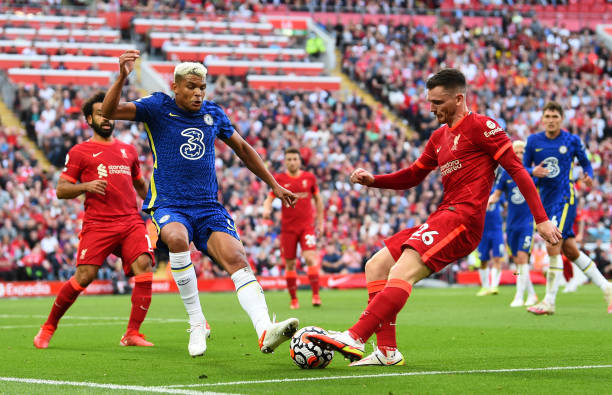 All of Chelsea’s good work in the first-half had essentially been reset to zero without warning and now Thomas Tuchel’s plans needed changing. On came Mateo Kovacic and Thiago Silva, the latter making his first appearance since limping off tearfully in June’s Champions League Final.

Liverpool’s suffocating pressure in numbers continued from the early exchanges, but crucially lacked incisiveness to produce more than a few routine saves from distance by an alert Mendy.

Harvey Elliott, a surprise inclusion over Thiago Alcantara and Naby Keita, continued his encouraging displays with many expecting this season to be a breakthrough year on Merseyside.

The 18-year-old ex-Fulham man came close early on with an audacious effort from distance which flashed past the post, was energetic but largely wasteful on half-chances at goal.

Diogo Jota, on for the injured Roberto Firmino, headed over the bar after good work from Salah. They hussled and harried, while Virgil van Dijk, Andy Robertson and more all had efforts repelled.

Mendy worked hard to keep the scores level at 1-1 but the same could be said for captain Cesar Azpilicueta, who on his 32nd birthday here, proved why he’s lasted nine years in west London. 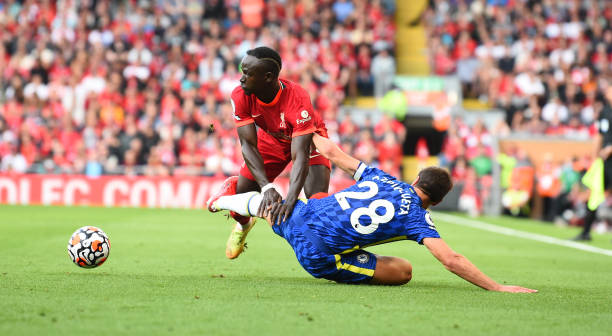 Azpilicueta marshalled Mane and others well, much to the hosts’ frustration

Nine clearances, six tackles and three interceptions, he refused to be bullied from set-pieces despite being several inches shorter than Liverpool’s centre-backs – composed under pressure and helping the visitors earn a hard-fought point when it seemed they were there for the taking.

Lukaku’s lack of luck and a chance missed for Liverpool 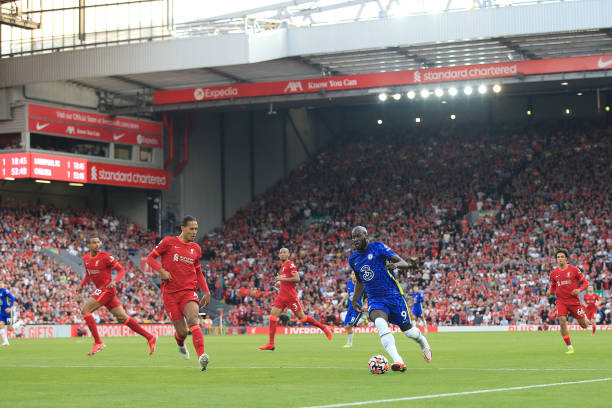 Lukaku tried too hard to do things on his own, after indecisiveness from teammates ignoring his runs

The media aren’t blameless, but Lukaku vs. van Dijk and co was a matchup many had their eyes on, given the ease with which the Belgian feasted on Arsenal’s porous backline last weekend.

Would he back that up against a sterner defensive test here? Maybe, had the service been better.

For better or for worse, Romelu has routinely been described as a flat-track bully for the bulk of his career in England. Starved of meaningful touches in the first-half, his incisive runs beyond the Reds’ backline often went unpunished and he was largely a passenger out of possession.

When trying to go alone, the ball wouldn’t follow as quickly as his feet desired – or he’d eventually be halted in his tracks on a few occasions, to raucous cheers from the home faithful.

On another day, he could’ve had a hat-trick and his name in the headlines as their matchwinner again. Moments like these below highlight the fine margins with which strikers are judged, in games where one moment of brilliance or incisive decision-making can change the narrative:

After losing his dribble on a solo run, then winning the ball back, Lukaku goes beyond Matip after this freeze-frame – but Mount’s lofted ball, rather than a through ball across the ground, kills the move

For the second time in a minute, Lukaku finds himself in a promising position – Kante opts for Havertz to his right instead, rendering his probing run useless as the attack eventually breaks down

Later on in the first-half, Lukaku charges forward as Chelsea transition from defence to attack in an instant, leaving Matip in his dust on the turn before feeding Mount to his left…

Lukaku can’t believe Mount opted for goal instead of squaring it back to him inside the area, with teenager Elliott alongside him but no match in a duel had MM returned the favour

After Manchester City cruised to regain their championship status last term, the narrative this season is one where England’s top-tier needs to be at its most competitive near the top. Chelsea beating them to become European champions in June only spices that storyline further.

Liverpool and their attempted title defence fell away rather drastically in 2020-21, partly because their key players were dropping like flies and also some poor contingency planning on their part.

But to suggest they should be anything besides rueful they didn’t win, after playing a full half vs. ten men – including that ten-minute spell after the restart – is either disingenuous or naive.

They had ample opportunity and quality on the pitch to prevail, whether that was through Trent Alexander-Arnold’s exquisite crossfield passes, Mane’s running or Salah’s ever-present threat.

Despite all their pressure, the Reds came up short and could’ve easily left empty-handed. That should serve as a warning, especially given their fixture list between now and early November…