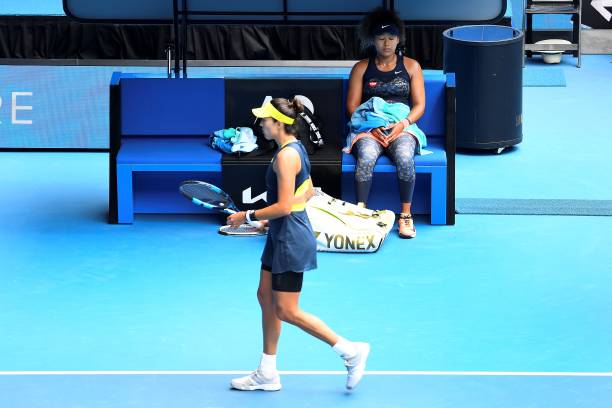 With the first round of matches at this year’s final Grand Slam starting from Flushing Meadows today, a look back at a memorable matchup from the first: Naomi Osaka saving two match points against Garbine Muguruza during their enthralling fourth-round encounter. She went on to win her fourth Major, and second in Australia, after an eventful fortnight seven months ago.

Osaka beat Muguruza, but why was this so memorable? 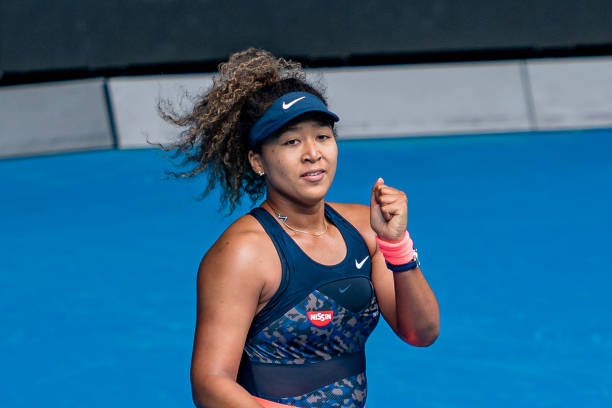 Osaka celebrates after clinching match point vs. Muguruza, 15 minutes after being forced to save two

From the eight sections of the women’s singles draw, there were four three-set encounters in R4. Sabalenka-Serena, Halep-Swiatek and Osaka-Muguruza were precisely the sort of matches that wouldn’t look out of place in a semi-final, or Slam showpiece event, such is their quality.

This one was intriguing, as last year’s runner-up faced the 2020 defending champion – whose title defence was ended by American teen Coco Gauff in R3. Ten of the top-14 seeds had been eliminated by the fourth round in successive years (2020, 2021) so who would crash out here?

Osaka could’ve easily been 3-0 up in set one, but just as quickly as her serve was a weapon, it proved an untimely Achilles heel. A double fault presented a break back opportunity for the Spaniard, which she seized after some impressive shot defence forced an error into the net.

Muguruza consolidated the break to level the scoring at two-apiece, before they exchanged service holds armed with defiant winners like these:

Osaka continued to hit ferocious forehand winners like this

Muguruza meanwhile, was content matching her in that department as they exchanged service holds

4-all was where things started to get interesting. Osaka had recorded more than double the winners (12-5) but also errors, overcooking forehands long and not always controlling rallies as she would’ve liked. A gutsy forehand return, from behind the baseline, almost caught the line.

It didn’t though, presenting two break point opportunities for Muguruza – made even more tense on her second serve, before hitting another return shot narrowly long. Just like that, the Spaniard served for the first set and made Osaka play a few extra balls to extract more mistakes. 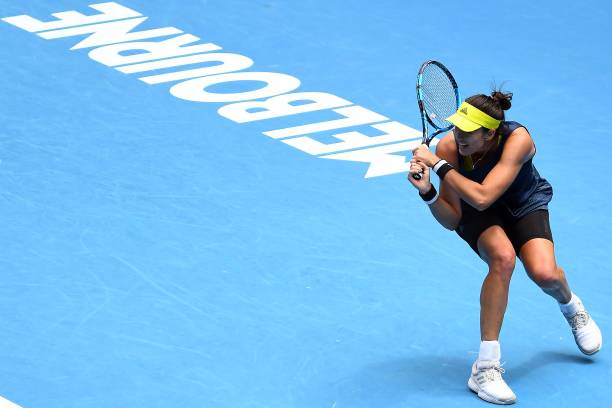 An uncomfortable start to set two

It was a shaky start to set two for the Japanese, facing three break points in the opening game as Muguruza’s momentum only continued rising. 2-0 down, she responded with a 48-second game on serve with two aces, a forced error and this beautiful line-kissing winner:

Despite her ever-increasing error count, Osaka was still able to produce shots like these

With the capability to win points like that so effortlessly from the baseline, perhaps hope of a spirited fightback wasn’t lost after all. Right on cue, those unforced errors continued to fly off her racquet but Muguruza blinked too under pressure: being broken straight back at 2-2.

The first set’s roles had reversed as Osaka held firm to cement her slender advantage, meaning the two-time Major champion was soon serving to extend set two. Despite saving two set points, she didn’t have the answers for a venomous return ace to level the scoring at one set apiece.

A pulsating decider, with twists and turns

Muguruza couldn’t mask her ever-growing sense of frustration, as things weren’t exactly going the way she would’ve hoped in the opening game of the deciding set. At 15-0 down, she was in control of the point but briefly looked at her team in disbelief after swinging a forehand long.

Osaka blasted her eighth ace of the afternoon in the next point, before baiting the 27-year-old into overcooking her return on a weak second serve. Soon enough, any danger of relinquishing an early break was swiftly averted by the former world no. 1 at the opposite end of the court.

Muguruza had to save a break point (2-2), before Osaka was facing two in the very next game and could have no complaints after a self-inflicted sequence of events. More serving inconsistency and poor shot selection allowed Muguruza to snatch points like these in quick succession:

Was Osaka starting to unravel? These were points on her racquet that, for one reason or another, she struggled to convert with any potency. Despite some resistance, Muguruza earned a massive hold to go 4-2 up and firmly had one foot into the second week in Melbourne.

Osaka did well enough to hold at 4-3, but Muguruza was firing on all cylinders and hitting all the lines with beautfiul winners like these to give herself a two-game cushion:

Points like these reaffirmed Muguruza was on top as the finish line drew nearer, but not for long

Making a trio of unforced errors on serve presented the Spaniard with two match points, but she saved both: the first with another timely ace, the second by making her adversary miss a forehand crosscourt from an awkward angle.

A forehand down-the-line winner and inch-perfect ace applied pressure back on Muguruza, serving for a QF berth up 5-4. She wouldn’t get a second chance at match points, as Osaka’s point construction and court coverage refused to let her off the hook – despite more nerves…

Osaka was winning the longer rallies, firing off more difficult winners and Muguruza’s mettle hadn’t just been tested, it had wilted before our eyes. She fired a wild forehand long, presenting three match points for the Japanese.

Naomi only needed one to punch her ticket into the second week, where she dropped just four games against Taiwan’s Su-wei Hsieh, setting up an exciting semi-final clash against Serena…

What happened next? What about the US Open? 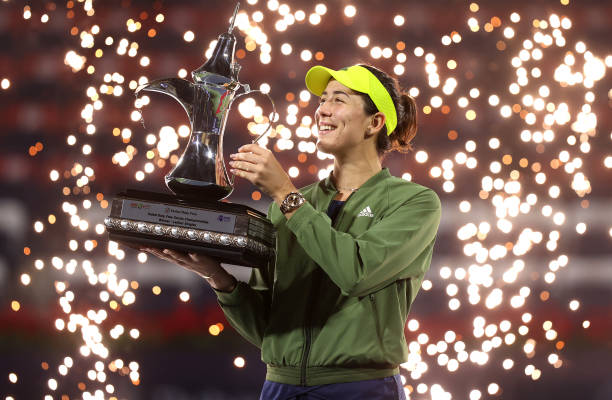 It’s fair to say that Osaka and Muguruza have gone in different trajectories since the Australian Open. The former has only completed 12 full matches in the six months since, while Muguruza racked up 13 since a shock R1 defeat by Ukrainian teenager Marta Kostyuk at Roland Garros.

They were both at the Tokyo Olympics representing their respective nations, Garbine losing in the quarter-finals to Kazakhstan’s Elena Rybakina while Osaka – lighting the opening ceremony cauldron – lost 6-1, 6-4 to eventual silver medallist Marketa Vondrousova in the last-16.

Muguruza’s results have stayed relatively inconsistent besides her success in Dubai, which was achieved just a few weeks after this heartbreaking three-set defeat. Activity and a drop-off from other rivals has helped her return to the world’s top ten, while Osaka still lacks match sharpness.

While Ashleigh Barty became a two-time Major champion, the 23-year-old has dropped to world number three after Aryna Sabalenka‘s recent achievements, after an extended break – withdrawing from Roland Garros and missing Wimbledon – to deal with her mental health.

Osaka will begin the defence of her US Open title in the night session vs. Czech Republic’s Marie Bouzkova (world no. 87) – the early hours on Tuesday (00:30AM BST, estimated start time).

Muguruza, seeded ninth at Flushing Meadows this year, takes on Croatia’s Donna Vekic (world no.57), who has struggled for consistency of late but stunned Sabalenka at the Olympics.