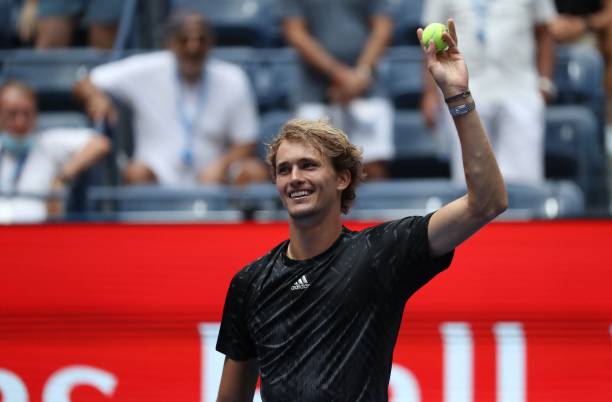 Olympic champions Alexander Zverev and Belinda Bencic both got off to a winning start in straight-sets against Sam Querrey and Arantxa Rus respectively, while David Goffin (#27) and Karen Khachanov (#25) were among the seeds to fall within the men’s game. Elsewhere, there was a winning start for Emma Raducanu on her US Open main draw debut as Day 2 unfolded. 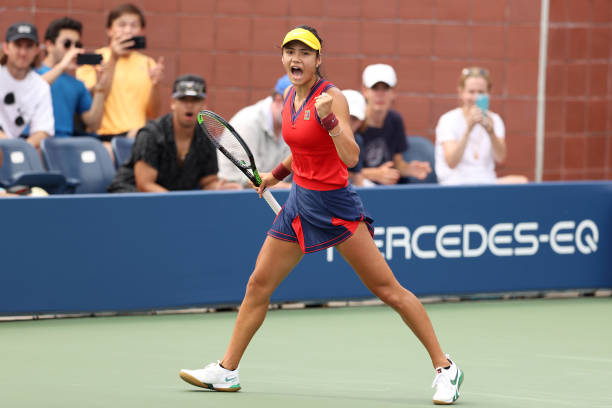 Second round beckons: Despite a shaky start and nervy finish, Raducanu had plenty to celebrate

Wimbledon’s teenage success story Emma Raducanu was making her US Open main draw debut against Swiss lucky loser Stefanie Vogele and despite a shaky start, fought well to win 6-2, 6-3 on her seventh match point in just over an hour 15 minutes.

Statistic: With this victory, Raducanu is the first British teenager since Laura Robson in 2011 to win a main draw match in New York.

After Jennifer Brady’s injury-enforced withdrawal yesterday, the 18-year-old went from underdog to heavy favourite in this matchup – having emerged unscathed in three qualifying rounds – making Vogele work for her points, even after being broken early in both sets.

The Brit responded well in the face of adversity, clinching five straight games from 2-2 with great court coverage and shot-making as Voegele was often second best during their rallies.

She needed to shorten points, but found herself being pulled from left-to-right far too often for comfort, as Raducanu’s readiness to fight for balls forced errors behind the baseline.

That much was evident at 3-2 in set two, as Voegle struggled to hold serve after being 40-0 up. They were engaged in a fierce battle for several minutes and despite eventually levelling at 3-3, Raducanu certainly dented the 31-year-old’s enthusiasm.

Another nervy Voegle service game ended with a two-handed backhand winner as Raducanu could see the finish line, before successive errors presented two match points. She double-faulted on the first, then Voegle hit a crosscourt forehand winner on the second.

Four more opportunities came and went as the nerves intensified, before a Raducanu backhand volley dropped in beautifully mid-rally – much to her visible surprise. Eventually at the seventh time of asking, another Voegle unforced error into the net sealed her passage into round two.

“I got there in the end, feel relieved and really good physically. The crowd helped me so much, made me feel so welcome, so I’m just excited to see how far I can go.”

last year’s finalist Zverev off to a winning start 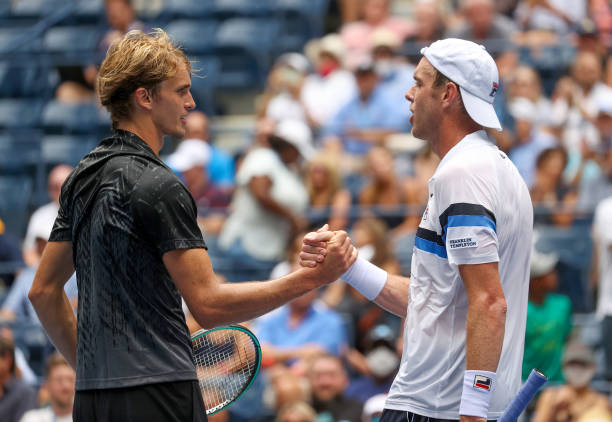 Olympic gold medallist Alexander Zverev has now won 12 consecutive matches, after dismissing Sam Querrey‘s spirited effort in straight sets on his return to the US Open.

It was the scene of his first Major Final twelve months ago and having relinquished a two-set lead against Dominic Thiem, the 24-year-old German revealed an eagerness post-match to extend that run to 18 matches once this fortnight is over during an awkward interview.

There’s a long way to go, but after recovering to end Djokovic’s dream in Tokyo last month, he’ll hope he is the man to snap the Serbian’s attempt at the calendar Slam. This was a good start, armed with a 90% first serve points won percentage (45/50), 39 winners and 18 aces.

Querrey was competitive over the first two sets while saving three match points on serve, but Zverev’s fearsome forehands and increased sense of urgency made the result feel increasingly inevitable in set three.

He’ll play Spain’s Albert Ramos-Vinolas in the second round, after outlasting France’s Lucas Pouille 6-1, 5-7, 5-7, 7-5, 6-4 in a nail-biting five-set clash which went right down to the wire.

Pouille hit an eyewatering 85 winners but equally, 59 unforced errors, saved two match points and will sleep tonight wondering what might’ve been: missing a makeable volley at the net mid-rally, before double-faulting on the third match point with the contest still up for grabs at 5-4.

Bencic back to winning ways 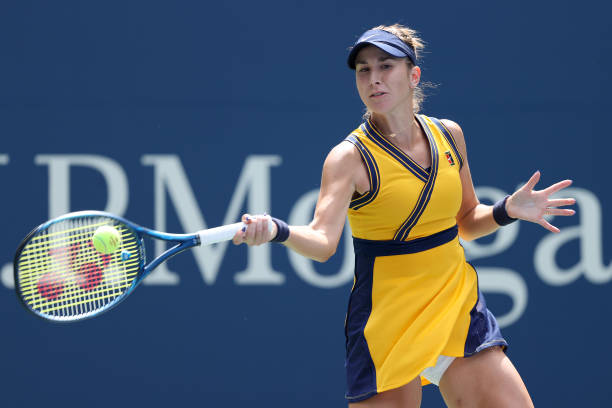 After winning just five games in her Cincinnati quarter-final matchup against compatriot Jill Teichmann on August 22, Olympic champion Belinda Bencic returned to form with a workmanlike display against the Netherlands’ Arantxa Rus.

She’ll play Italy’s Martina Trevisan in R2 on Thursday, after the 2020 Roland Garros quarterfinalist fended off a challenge by American wildcard Coco Vandeweghe to win 6-1, 7-5.

Bencic, a semi-finalist at Flushing Meadows two years ago, didn’t appear at last year’s COVID-impacted edition but has struggled for consistency in Major tournaments. Her best showing in the last three years, that result aside, is five third-round defeats. How will she fare this time here? 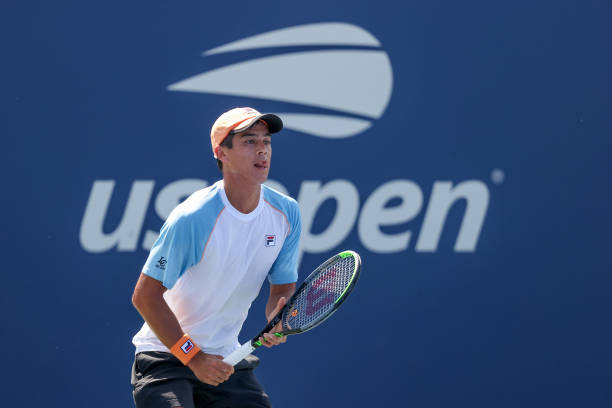 Mackenzie, who reached the fourth round at this year’s Australian Open, produced a two-handed backhand winner to seal an impressive 6-2, 7-5, 6-3 victory over the 27th seed.

He’ll play Japan’s Kei Nishikori on Thursday, after the 2014 US Open finalist raced into an early two-set lead over Italy’s Salvatore Caruso, lost a much tighter third set, then responded well under pressure to avoid contesting another decider – eventually winning 6-1, 6-1, 5-7, 6-3.

Did you know? McDonald beat Nishikori 6-4, 3-6, 7-5 in the Washington semis earlier this month…

He’ll need more than his 13 winner count on Thursday to topple the 6’11 talent, who celebrated his 24th birthday at the weekend.

The 24-year-old will face Nikoloz Basilashvili in round two, after talented young compatriot Sebastian Korda retired from their match down 2-6, 1-2 against the Georgian with a back injury.

Fritz was in fine form against de Minaur, despite the Australian’s late fightback

American wildcard Jenson Brooksby, 21 next month, earned a 7-5, 6-2, 5-7, 6-3 win over Sweden’s Mikael Ymer. His reward? An all-American clash in round two against Taylor Fritz, who also prevailed in four sets against Alex de Minaur (#14th seed).

Since beating Lorenzo Sonego to win Eastbourne on June 26, Australian talent de Minaur is now 1-5 in recent tournament play – which includes Wimbledon and now the US Open too.

Speaking of Sonego, he was stunned by German qualifier Oscar Otte – engrossed in a five-set clash with Andy Murray at SW19 – losing 6-7, 7-5, 7-6, 7-6 in a duel with three seperate tiebreaks. 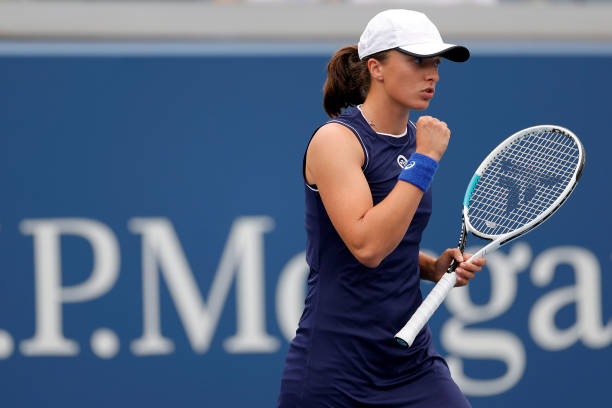 Iga Swiatek hit a trio of aces in the match’s final game to finish with a flourish, but the second set was far from straightforward against defiant qualifier Jamie Loeb in the latter’s home Slam.

Just when the crowd thought Loeb had a half-chance to create separation, Swiatek would respond with a beautiful winner or force an error to suck the air out of the Grandstand court.

The 26-year-old’s admirable shot defence kept the Pole honest during rallies, but the 2020 Roland Garros champion made subtle adjustments to outsmart her adversary. She plays France’s Fiona Ferro up next, after the 24-year-old won 6-1, 6-4 against Japan’s Nao Hibino. 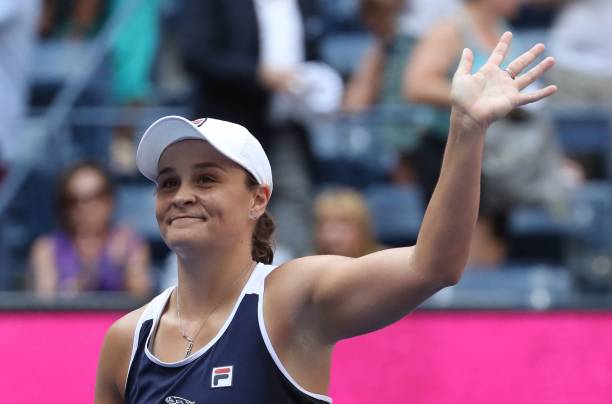 The 36-year-old, a beaten finalist here in 2010 by Belgium’s Kim Clijsters, has only surpassed R1 twice in her last seven main draw appearances. Given how she was able to psychologically dismiss a one-sided opening set, raise her level and compete, you wouldn’t have known.

That was in part due to Barty’s drop-off from a favourable position at 5-3 up, but it takes two to tango even with momentum switches: her first serve percentage was much improved (65-81%), recording more winners (2-8) and approaching the net frequently with sustained success too.

Ultimately, she was fighting from behind and the pressure told. Barty plays Danish teenager Clara Tauson, winner in Chicago, on Thursday in round two after beating France’s Clara Burel. 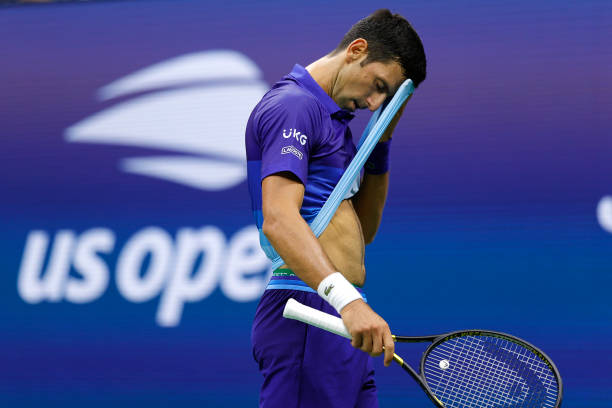 Djokovic’s level suffered drastically at the start, and in the middle, of a startling set two

One down, six to go. If Novak Djokovic is to punch his name into tennis immortality – achieving the calendar Grand Slam – he needs to play much better than he did on Arthur Ashe tonight.

Holger Rune, a highly-rated teenage qualifier and former world number 1 at junior level, is certainly no slouch. But the Dane was simply blown away in set one and the US crowd were unsure what to think, on an evening where more big names fell, they wanted entertainment.

The 18-year-old certainly provided that, much like British wildcard Jack Draper in the opening round at Wimbledon on June 28. The key difference between the pair? Rune was riding a 13-match winning streak heading into this matchup, which included three qualifying rounds.

He won titles in San Marino and Verona beforehand, was confident and could call upon previous experience hitting with Djokovic. Draper has only played two, and lost both, his matches since the aforementioned SW19 experience: Aziz Dougaz (Aug. 23) and Andrea Vavassori overnight.

Rune looks the part physically, has a devillish forehand and generates power with ease – that was obvious even on one leg for a set and-a-half as muscle cramps consumed him. On his haunches between points and grimacing, he played through it but the damage had been done.

Djokovic, whose serving could very well decide how this fortnight unfolds, served seven double-faults. That number in isolation is anomaly territory, but five of those were in set two alone and always seemed to return to the fore just when he needed a decisive moment to go his way.

The Ruuuuuuune chants from the energetic crowd were an experience in and of itself but importantly, Djokovic refocused after losing a tiebreak that was there for the taking. His incisiveness had briefly deserted him, but those 15-minute stumbling spells eventually ended.

He began set three well, holding serve and gladly pouncing on Rune to establish a break of his own at 3-1 after a trio of unforced errors on serve gifted the Serbian a momentum shift.

Rune’s errors became more pronounced afterwards, as he began to cramp up and the writing was on the wall when Djokovic consolidated that break. Parity restored, the world number one cruised to victory from that moment on, but was clearly distracted by Rune wincing in pain.

“It’s never nice to finish the match the way we did today, Holger is a great guy, one of the upcoming stars, making his way through professional tennis very quickly, deserves a big round of applause, it’s unfortunate he had to go through that.” 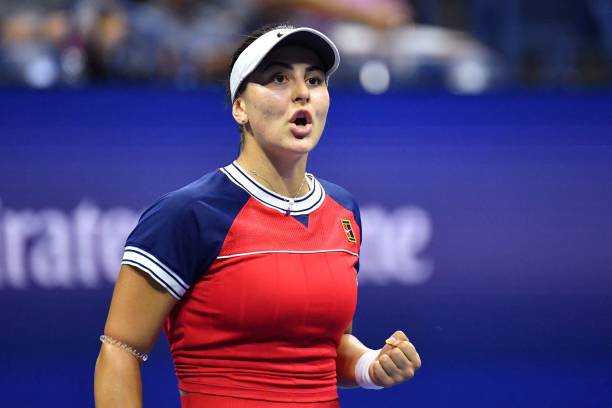 “Definitely emotional, I’ve been struggling a lot this past year, just thinking about all those struggles – it’s all worth it to win on this court again. Felt super nauseous, was fine after a few games but that was strange because I ate several hours ago.”

It was a rollercoaster ride for Andreescu, but one she eventually won against Wimbledon quarterfinalist Viktorija Golubic (world no. 45). After losing a competitive second set, a reset was needed but easier said than done: such was Golubic’s intensity and excellent shot-making.

Later on, it looked like the young Canadian would be the highest seed to fall through two days at Flushing Meadows as the Arthur Ashe Stadium started to empty, well over midnight local time.

But to her credit, she won four of the next five games from 4-2 down to break back and force Golubic into serving to take this thriller into a deciding set tiebreak. Increasingly irritable as she was being overpowered during their baseline rallies, Golubic fumed towards her player box.

She knew, as well as many still left hollering in the crowd, Andreescu was ready to pounce on any little chance. Like when she unleashed a ferocious crosscourt backhand winner down 30-15.

Golubic shanked a backhand return long to present match point, before another forehand error saw the 2019 US Open champion shout her loudest come on! If you didn’t know, Bianca’s back.