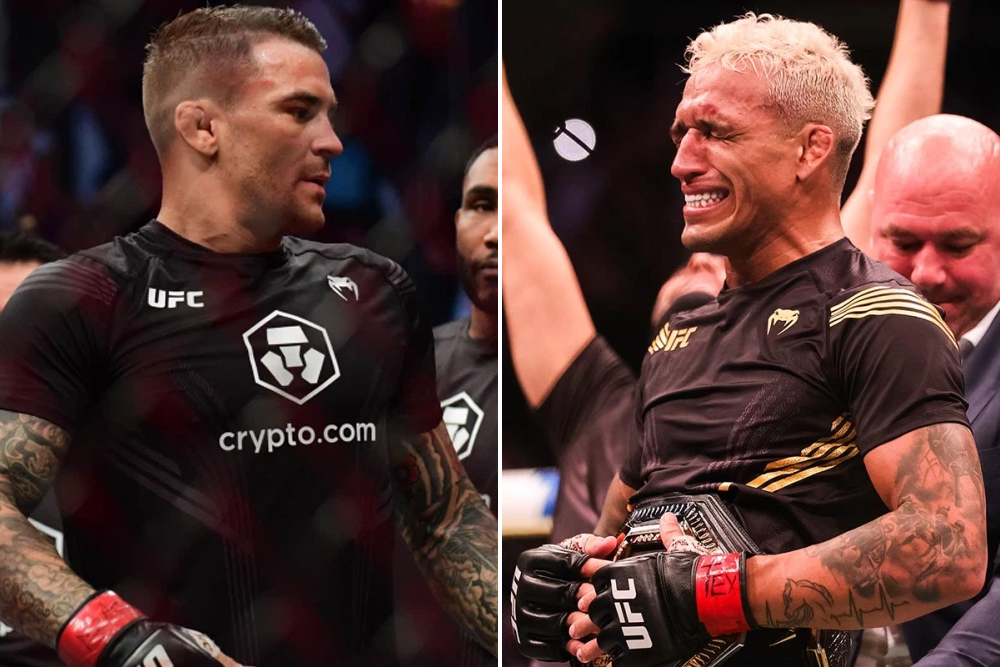 Per a recent report from MMAFighting.com, the promotion is targeting Charles Oliveira’s first lightweight title defence to be against Dustin Poirier at UFC 269 on December 11 – verbal agreements are already in place, though contracts haven’t yet been issued. That PPV already has a title bout slated: Amanda Nunes defending her bantamweight strap vs. Julianna Pena.

an even tougher test: poirier to be oliveira’s first title defence

In a division now devoid of undefeated former champion Khabib Nurmagomedov, Poirier (28-6, 1 NC) is widely regarded the uncrowned champion at 155lbs. His only defeat since 2016 was a third-round submission by Khabib, he’s riding a three-fight win streak and oozing confidence.

After Conor McGregor’s abrupt leg break resulted in a TKO win during their much-anticipated trilogy bout at UFC 264 on July 10, it felt inevitable his next matchup would be for the belt.

Oliveira, who had a R2 comeback win over Michael Chandler to win gold two months earlier at UFC 262, boasts an even better victorious streak (9-0 since losing to Paul Felder in Dec. 2017).

Having most recently flattened Kevin Lee and dominated Tony Ferguson last year, his winning run became too much for the matchmakers to ignore – though Chandler’s place as the other title challenger was questioned even after an excellent debut saw him quickly flatline Dan Hooker.

So in that regard, the right man won. It wasn’t without difficulty and Poirier is certainly used to the big occasions, so it’ll be interesting to see how the Brazilian handles his first title defence.

At the time of Poirier’s trilogy win, I wrote: Oliveira had a perfect seat Octagonside and was interviewed by Megan Olivi afterwards. The 31-year-old also bemoaned the way this fight ended – saying you never know what might’ve happened – but is ready for “war” against Dustin next.

The double champ returns to defend her 135lb strap on Dec. 11

All things permitting, this card will also feature Amanda Nunes‘ latest title defence as she faces Julianna Pena (#5), four months after their original bout was scheduled.

The 33-year-old double-champion tested positive for COVID-19 and Pena now has peace of mind, knowing another date is set in stone for the end of 2021. Elsewhere, former bantamweight champion Cody Garbrandt prepares to make his flyweight debut against Kai Kara-France (#7).

There are also two flyweight bouts already scheduled for this Dec. 11 card as Gillian Robertson faces Priscila Cachoeira, while Maycee Barber (#13) hopes to produce a more clinical display than her SD win over Miranda Maverick, with TUF alumni Montana De La Rosa up next.