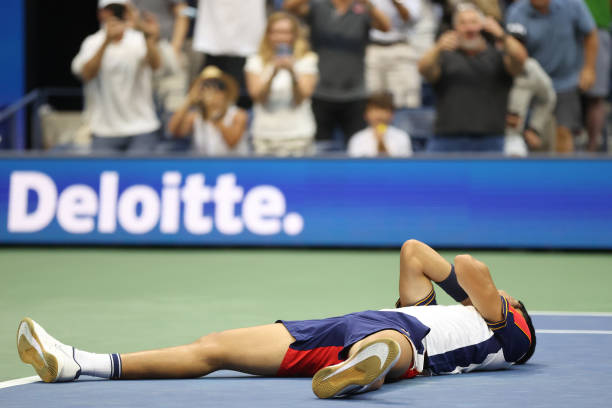 Spanish teenager Carlos Alcaraz produced a masterful display, full of peaks and troughs, en route to a historic five-set win over Stefanos Tsitsipas (#3) – reaching his first fourth round at a Grand Slam, becoming the youngest to do so since 1992. Elsewhere, Naomi Osaka (#3) and Andrey Rublev (#5) were among the seeds to fall, on a day that certainly didn’t disappoint. 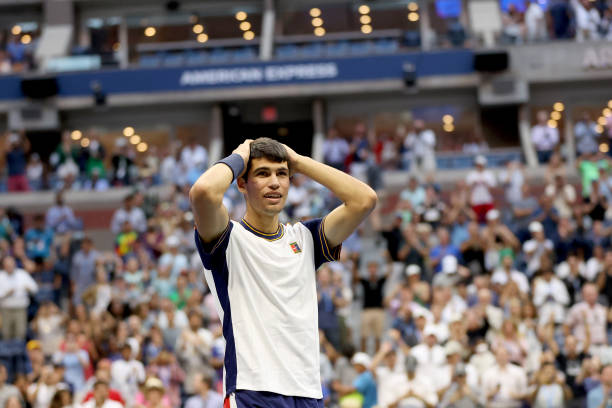 That damned drop shot, Stefanos Tsitsipas must’ve thought. Carlos Alcaraz produced a set-and-a-half of perfect tennis, racing into a 6-3, 3-0 lead over the third seed, and it would eventually get better – despite the Greek’s defiant fightback as the crowd sensed vulnerability.

But first, some much-needed context as far as this result is concerned. The biggest win of his career, Alcaraz became the youngest man in a Grand Slam fourth-round since Andrei Medvedev did so at 17 at Roland Garros’ 1992 edition.

Tsitsipas’ villain role was in full swing after a pulsating five-set win over Andy Murray in round one, which wasn’t without bathroom break controversy, most of which felt overexaggerated.

Anyway, back to Alcaraz. He’s the youngest man to achieve said feat in the US Open since Michael Chang (17) and Pete Sampras (18) in 1989. Since the rankings were first introduced in 1973, no-one younger than Carlitos (18y, 122d) has beaten a top-three player at this tournament.

It’s part of the reason why those on Arthur Ashe swelled with noise every time he cracked a backhand winner, or shortened a pulsating rally by playing that deadly drop shot to good effect.

Tsitsipas, whose backhand slice is a well-known weakness, was made to look silly at times and found himself fighting against the teenager’s relentless pressure throughout with mixed results.

He has been criticised for not having a true plan B when things aren’t going his way, unless his opponent endures a drop-off of sorts. That much was clear in a third set he should’ve sealed, having led 5-2 with a double break – three set point opportunities came and went unrewarded.

Instead, Alcaraz fought his way back and gained strength knowing he could edge his way through longer games. Although Tsitsipas responded with a fourth set bagel, Carlos began the deciding set and fed off the crowd’s infectious support by being attractive with his aggression.

“I was down at the end of the fourth set, thank you to the crowd for pushing me up, it’s an incredible feeling for me. This victory means a lot for me, the best match and win of my career, a dream come true and for sure, here it’s more special.”

Many critics believe his run can continue even further with German qualifier Peter Gojowczyk up next for a quarter-final berth after the 32-year-old German won in four sets vs. a fellow qualifier in Switzerland’s Henri Laaksonen, meaning new Major achievement for both players.