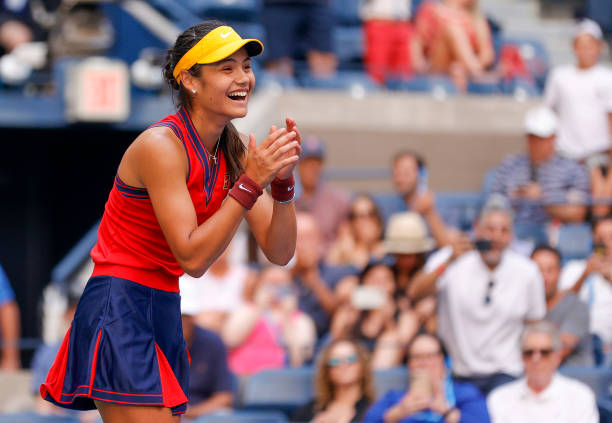 Emma Raducanu is a US Open quarter-finalist after overcoming a nervy start to blitz past Shelby Rogers, while Novak Djokovic faces Matteo Berrettini next. The world no. 1 came from a set down – beating the last American man standing – 20yo wildcard Jenson Brooksby. Olympic champions Alexander Zverev and Belinda Bencic also earned big wins, among others on Day 8. 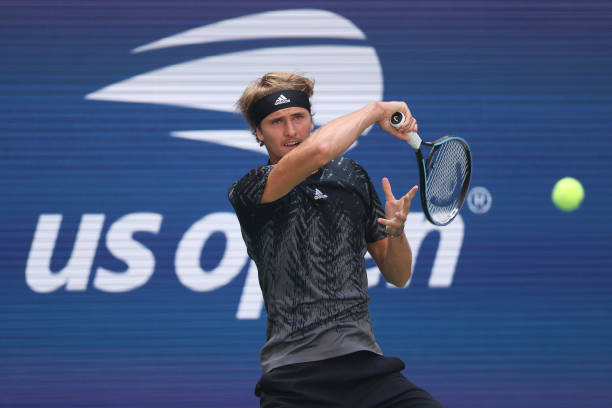 Zverev knew it wouldn’t be easy but stuck to his guns vs. Sinner, holding firm to win in straight-sets

Earlier this year, the German said Sinner would be a top-10 player before long and Jannik – who turned 20 in mid-August – certainly showcased why he’s so highly-regarded.

However, Zverev soaked up sustained periods of pressure against the Italian and stung him when it mattered. Now 15 matches unbeaten, the 24-year-old recorded 17 aces over a match lasting just shy of two hours 30 minutes but it easily could’ve gone much longer in truth.

Despite both struggling in terms of break point conversion, Sinner had him on the run and scrambling after returning some serves other players wouldn’t dare trying to get their racquet to.

The third set proved a good example of that, as Zverev showing steely composure in tight moments to save five set points – two at 6-6, three more in the tiebreak – before wagging his finger after rallying from 4-1 down to win the breaker 9-7: sealing another morale-boosting win.

He’ll play South Africa’s Lloyd Harris for a semi-final berth, after his agemate recovered from a set down to knock out big-serving American Reilly Opelka 6-7, 6-4, 6-1, 6-3. 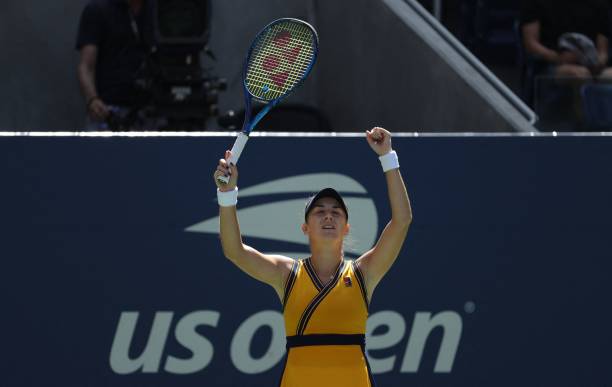 Staying with Olympic champions for the moment, Belinda Bencic is into the third Grand Slam quarter-final of her career, and similarly had to do it the hard way against 2020 French Open titlist Iga Swiatek – which included a gruelling 25-minute first set tiebreak.

Winning the first set with a 14-12 tiebreak scoreline, having saved four set points and relinquished a 5-3 advantage herself, the Swiss international responded well by refusing to dwell on previous missed opportunities as she held firm, eventually taking that razor-set opening set.

READ: Tokyo Olympics – After seizing gold for Swiss, can Bencic build on this triumph?

She saved a break point early in set two, then was presented with three chances to earn a 3-1 lead – taking it on the third occasion, as the finish line edged closer during a breathless matchup between two power hitters who didn’t want to relent.

Swiatek had chances and saved more break points (7/9), but was essentially fighting from a deficit after being broken in the match’s opening game.

Bencic’s best results have all come at Flushing Meadows (2014 QF, 2019 SF, 2021 QF) and while in-form, she’ll fancy her chances of bettering that result this year given the draw. However, she faces a bullish teenager whose stock is rising, with nothing to lose and plenty to gain up next…

Raducanu storms ahead after nervy start, us open quarters 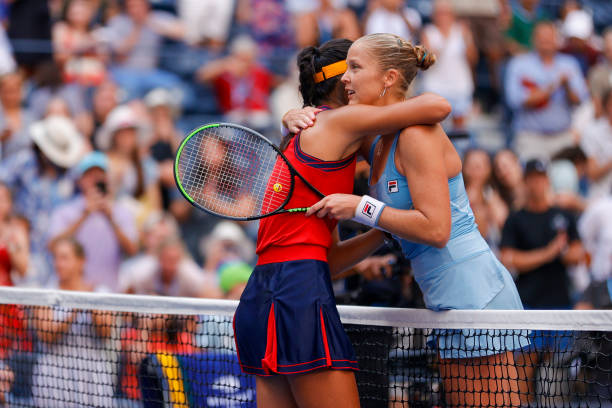 The pair embrace after an affair that started nervously for Emma, then quickly became one-sided

Wimbledon teen sensation Emma Raducanu recovered from a nervy start, becoming the third qualifier to reach the US Open quarter-finals in the Open era (Kaia Kanepi, 2017 and Barbara Gerken, 1981) with a thunderous 6-2, 6-1 win over Ashleigh Barty’s conqueror Shelby Rogers.

In the summer shade on Arthur Ashe, the teenager was facing the unfamiliar prospect of being down an early double break – saving two break points as Rogers almost raced into a 3-0 lead, albeit one packed with tense, long games and momentum shifts.

Then, she did what she has become almost a trademark of her maiden main draw experience at Flushing Meadows: winning eleven consecutive games, drastically flipping the switch on the American and gaining strength as unforced errors continued flying off the 28-year-old’s racquet.

Rogers was rattled and duly punished for failing to truly seize the early initiative as Raducanu’s nervous start didn’t last. Suddenly, missing out on those break point opportunities had cost her dearly while that purposeful beginning quickly fizzled out. It wasn’t long before it was all over.

“It feels absolutely amazing to play in-front of all of you, Shelby’s a great opponent, done well, so happy to have overcome nerves at the beginning. Everyone has their own trajectory, happy to have focused on my own game.

I’m going to do my best in each round, let’s see how far it goes. Belinda is a great player in great form, I’m going to have to bring it on Wednesday, have to dictate… Thank you for watching, unbelievable support – I’m really grateful.”

Wimbledon finalist Karolina Pliskova (#4) earned passage into the ninth Grand Slam quarter-final of her career, with a gritty 7-5, 6-4 win over Russia’s Anastasia Pavlyuchenkova (#14).

The victory snaps a two-match H2H losing streak, having suffered defeats at last year’s Australian Open and also in Madrid at the start of May. She’ll play either Maria Sakkari (#17) or 2019 titlist Bianca Andreescu (#6) next, with the pair battling in an intriguing fourth-round match tonight. 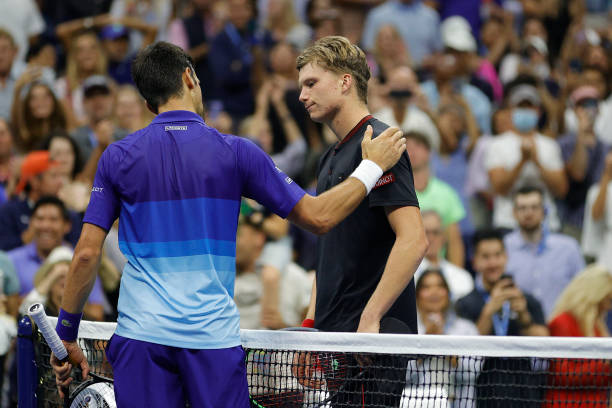 The pair share a warm embrace at the net, as Brooksby gave it his all and acquitted himself well

Novak Djokovic endured another sluggish start, but again rallied from a set down to knock out American wildcard Jenson Brooksby in an enthralling four-set encounter.

Brooksby started brilliantly, winning 75% of points behind his first serve (15/20) and recording just one unforced error in set one. Djokovic, despite producing three more winners (8-5), had a whopping 11 unforced errors and struggled to find his rhythm.

In the second set, was where things started to get interesting. Djokovic’s bold second serves under pressure returned, as he saved five break point opportunities at 3-1 with a 117mph serve among the pick of his timely shots to keep Brooksby on the back foot.

The 20-year-old, buoyed by his well-deserved advantage, was frequently winning the longer rallies and didn’t shy away from the challenge. It’s why, after a 20-minute game packed with twists and turns, he defiantly snatched the break point on attempt no. 6.

It was a truly epic game but after imposing his will against the world number one, Brooksby couldn’t believe what he saw in the very next game after their changeover.

Having seen the Serbian alternate between firing off aces and then struggling for first serve consistency, suddenly Djokovic responded with a break back. Just typical of the man’s resolve.

His first serves in play percentages were stark compared to Brooksby (47% – 93%) and were part of the reason why it felt like he was playing catch-up more often than not during rallies, whereas the American had the freedom to dictate rallies behind his serve.

Djokovic was punished for being more conservative, incorporating needless drop shots at times where his much younger opponent would read those attempts and exploit them. However, the tide turned as those physical rallies took a lot out of the hometown hero.

A set apiece, the big question was whether Brooksby could sustain his level and execute more clinically down the stretch.

Djokovic delivered a series of good returns mid-rally, earned an early break and later consolidating it with the vintage hitting we often see from the 20-time Grand Slam champion.

Brooksby kept his tennis clean and relatively error-free, still with half the unforced error count (16 to Djokovic’s 32) at one point midway through set three, but while Novak’s forehand was letting him down, it was clear he had found his striking range.

More assertive ball-striking, as Brooksby was audibly grunting more during points, meant this match was gradually getting away from the plucky American.

For all of his unorthodox moves, the refreshing swagger he carried along to the battle, Djokovic was wearing on him, sealing a 6-2 third set and another early break started the fourth.

Brooksby remained a pest, despite not moving as sharply as he initially did, because he was able to generate power with big winners from deep like this:

Brooksby, despite suffering physically as the match wore on, could still conjure up moments like these

Just as the crowd felt like their man was getting a second wind though, Djokovic delivered more of that trademark shot defence to devastating effect and was clearly growing in confidence:

Although he recorded countless forehand errors, confidence in his backhand prompted shots like this

Djokovic was starting to find the lines with much more assurance, the longer this match went

Somehow with his ridiculous shot defence and movement, Djokovic ended up winning this point…

Finishing the match with a delicate drop shot winner at the net, you’re naturally left wondering what Brooksby could’ve done with a full tank – just like Holger Rune in round one – could either have sustained their level long enough to take it into a deciding set?

Either way, as I said at the weekend, Djokovic will feel he’s playing his way into form but still hasn’t been at his best yet this tournament. The same can be said for quarter-final opponent Matteo Berrettini (#6), in what will be a rematch of their Wimbledon Final.

The Italian didn’t have it his own way but outlasted German qualifier Oscar Otte eventually winning 6-4, 3-6, 6-3, 6-2 against the 28-year-old – who had a nasty wrist injury late on and did well to make it this far, building on his memorable showing at Wimbledon over the summer.

“You guys gave us both a lot of energy, motivation to showcase what we got. Brooksby is a very young, talented player with a bright future ahead of him.

It wasn’t a great start for me, Jenson was pumped, had a clear gameplan, executed all the shots very efficiently and I was really on my backfoot.

Momentum changed midway through the second set, I started hitting more cleanly after the break back in the second, hit my spots well in a very physical battle with exhausting rallies but credit to him for his performance – fantastic.

He disguises his drop shots, slices very well, very crafty and intelligent player, only 20 so there’s a lot of time ahead of him, America has a bright future.

It’s gonna be exciting, he [Berrettini] loves the big stage, is already an established top-5 player with a big serve and big game overall. Played quite a few times on different surfaces, I’ll hope for the best.”