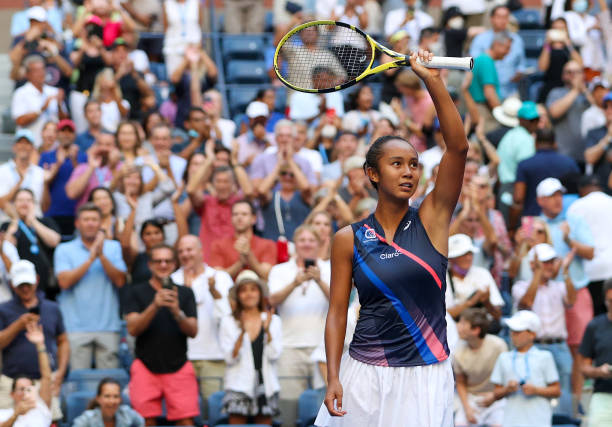 Although an unspectacular semi-final and contrasting injuries saw the night session finish within a flash on Day 9, three new Grand Slam semi-finalists were sealed – two for the first time – as 19-year-old Leylah Fernandez’s dizzying tournament continued with a dramatic win over Elina Svitolina, before compatriot Felix Auger-Aliassime fended off Carlos Alcaraz overnight. 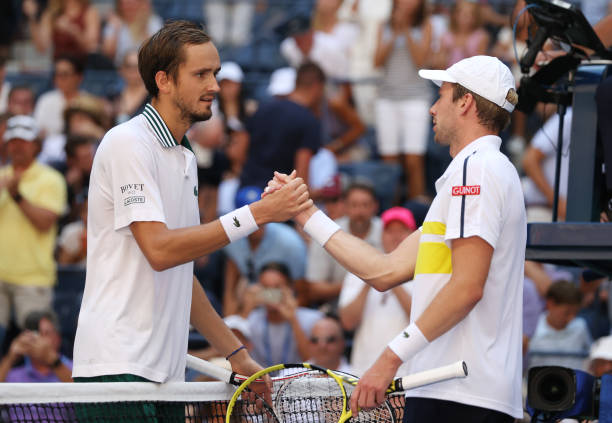 There were a few nervy moments, but world no. 2 Daniil Medvedev booked his place in a fourth Grand Slam semi-final with a four-set victory against Dutch qualifier Botic van de Zandschulp.

The 25-year-old will rise to a new career-high ranking of 62 in Monday’s updated standings after producing an unforgettable fortnight where he came through three qualifying rounds before beating the likes of Casper Ruud (#8) and Diego Schwartzman (#11) from an open section.

He was immediately put on the backfoot by Medvedev here, being broken twice in his first three service games before being bagelled (6-0) in a 23-minute second set. Things seemed ominous after an hour’s play, even while acknowledging this was a true mismatch on paper.

However, that didn’t seem to faze him at the start of the third and VDZ was eventually rewarded despite losing the opening game – the match’s longest – missing three break point openings.

His first serve percentages were volatile throughout, but he won 82% of points behind his first serve in set three (14/17) and recorded just six unforced errors after 19 in the first two sets.

Despite seeing a match point opportunity flash beyond him at 5-5, the Russian then held his nerve to break the Dutchman afterwards, avoiding what would’ve been a high-pressure tiebreak.

Van de Zandschulp was never supposed to get this far, but as I’ve said already this year, qualifiers like him, Aslan Karatsev and Germany’s Peter Gojowczyk prove the quality is there… 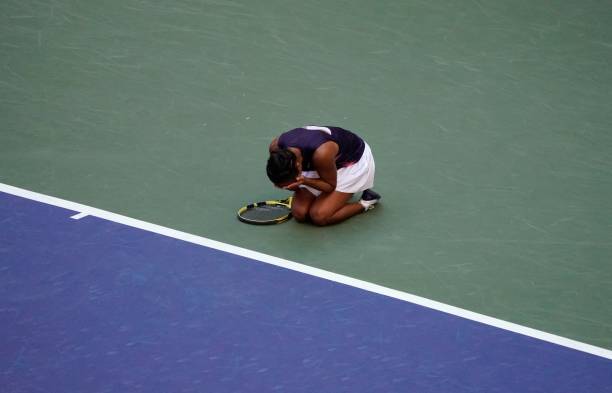 Svitolina proved the latest in Leylah Fernandez’s wake, as the 19-year-old is into a Slam semi-final

Leylah Fernandez is a Slam semi-finalist and had to do it the hard way against Elina Svitolina, edging past the Ukrainian – who reached the semis two years ago – in a deciding set tiebreak.

This one had twists and turns, just like her three-set battle against Angelique Kerber in the previous round. But with the crowd behind her at an electric Arthur Ashe Stadium, she displayed great resiliency after being broken twice in set two to relinquish her early set advantage.

3-1 up in the final set turned into 5-5 and suddenly the momentum shifted Svitolina’s way again, as she cranked up the pressure while their match statistics looked razor-thin. A tiebreak was needed to separate them and, again, Fernandez had to avoid dwelling on missed opportunities.

In theory, no-one should lose a tiebreak from 4-1 up when it’s essentially a race to seven. Jannik Sinner found himself in that situation yesterday against Alexander Zverev and ended up losing, but Fernandez rallied well with the scores finely poised at 5-5, winning it dramatically.

She drilled a passing shot beyond Svitolina, taking advantage of a lacklustre volley at the net before forcing an overhit forehand on serve to secure another remarkable three-set win.

“I was so nervous, trying to do what my coach [her father] told me to do, thanks to you guys, fighting for me and cheering me on, I was able to push through. My dad told me to go out there, have fun, fight for every ball, it’s your first quarter-final but don’t make it your last match here, fight for your dream.

Svitolina is a great player, fought for everything and runs for everything, I’m honoured to have a fight with her… told myself to trust my shots, even if I lose, go for it, and I’m glad I did.” 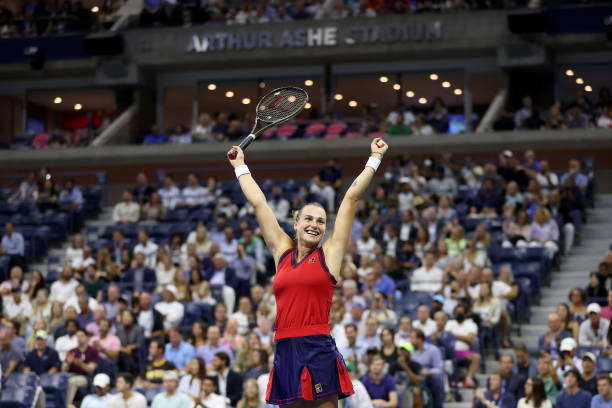 Sabalenka is into her second straight Slam semi-final, will play a teenager with nothing to lose next

Up next? It doesn’t get any easier with a determined Aryna Sabalenka (#2) in Thursday’s semi-final, after winning 6-1, 6-4 against an admittedly flat and fatigued Barbora Krejcikova.

It’s her first semi-final at Flushing Meadows, second successive Grand Slam tournament where she’s reached the last-four after doing so in south London two months ago. Despite some questions over her serving today, the Belarusian did well enough to comfortably win.

“It means a lot, I really love to be in New York, this is one of my favourite Slams, I’m enjoying every second and the atmosphere was amazing so thank you guys for the support.

I can’t explain it, there’s more people and really enjoyable. I watched her matches, saw she’s playing really well, this year really consistent, tried to focus on myself and put as much balls back as I can, it worked really well today.

She’s playing and moving well, the crowd are here for her, [she has] nothing to lose and it’ll be interesting, really looking forward to this one.”

She wasn’t particularly pleased with the way she served either and considering it’s such a big weapon of hers, the big question remains: can she handle that pressure as the favourite now?

Aryna Sabalenka straight onto the practice court after that win over Krejcikova— working on forehand line, then cross court (to start)#USOpen pic.twitter.com/YRIbpxYdL7 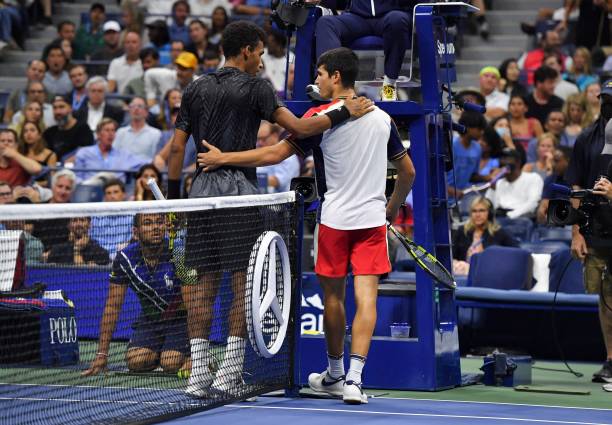 The pair share words at the net as Alcaraz abruptly retired with injury, down 6-3, 3-1

Felix Auger-Aliassime is into his first Grand Slam semi-final, but it wasn’t the way he would’ve liked to finish as Spanish teenager Carlos Alcaraz – one of the tournament’s big stories – abruptly retired with an adductor injury midway through set two of their quarter-final matchup.

Carlos Alcaraz says he had a right adductor issue and found it tough to recover after the consecutive five set matches, which he is not used to playing.

"I had no choice [but to stop] playing. I mean, first of all I have to take care of my body, to still healthy, no?"

He whipped a devastating forehand up the line to present himself two break points at 3-2 in the opening set and despite Carlos doing well to save three in that very same game, more untimely errors flew off his racquet – it wasn’t enough as it was first blood to the 22-year-old Canadian.

Despite some teething problems on serve to consolidate his break and again with set points nearing, Felix then saved three break points himself and took advantage of Alcaraz’s deep starting position behind the baseline – winning five straight points to secure a tough hold.

Alcaraz was punished for not being aggressive enough at certain moments, then being too passive in others, as Auger-Aliassime was comfortable dictating rallies.

Even if his rising double-fault count prompted some hushed whispers within the crowd, Felix’s 14mph differential in average serve speed meant he controlled the bulk of points the way he wanted to, while Alcaraz was largely playing catch-up and couldn’t beat him enough with power. 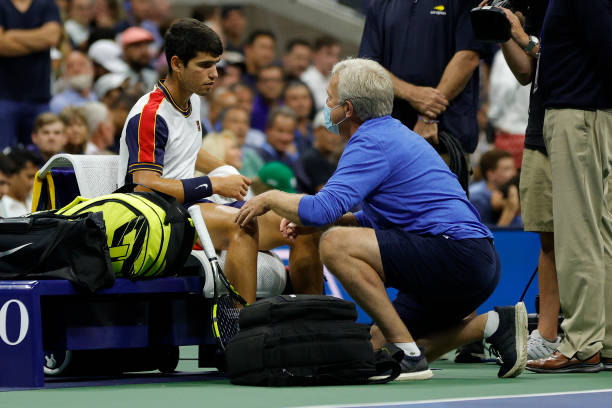 Alcaraz, who called for the physio during his five-set win over Gojowczyk, decided not to continue

Alcaraz received a medical assessment at the changeover, down 2-1, as the camera showed he had taping on his upper left leg. He stood rooted to the spot as Felix blasted a serve to seal a 3-1 advantage, before suddenly, Carlitos took the executive decision to avoid further damage.

Carlos Alcaraz will be ranked #38 on Monday.

Very good chance to be seeded at the #AusOpen. He make his top 100 debut three months ago… pic.twitter.com/4qzbKqcohV

Felix had plenty to say during his on-court interview after the match lasted just 68 minutes:

“Until he [Alcaraz] called the physio, I didn’t know he was injured or see it coming. I’ve been serving good all week, was just trying to take it a point at a time and it was a really important game to finish strong [at 5-3].

[First Grand Slam semi-final, thoughts?] It’s an amazing milestone, fantastic tournament for me, a weird ending today but I’m through and have a chance to play on Friday against one of the world’s best, try to win the next one…

Alongside Zverev and Novak, he [Medvedev] is the most solid player on hard courts. I have to play my best tennis, mix things up, come in a lot, try disturb him, we practice together so hopefully we put on a good show.”

Now he gets some timely rest before the biggest match of his career to date, against a determined Medvedev who has quietly swept aside his section and been playing very well.