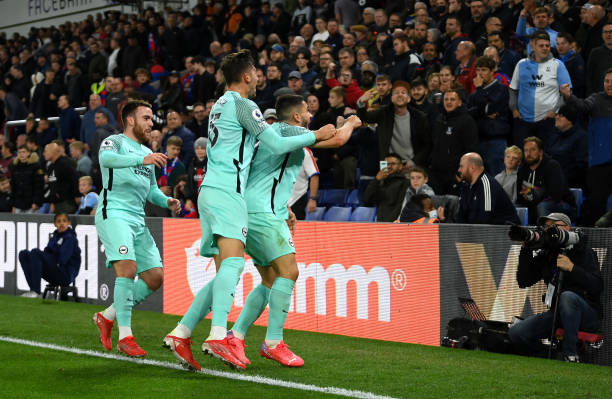 On a night where Conor Gallagher’s praises were sung, Wilfried Zaha capped his 400th appearance with a 70th Crystal Palace goal and the hosts revelled in halting Brighton’s brilliant start to the Premier League campaign, Neal Maupay pounced on a half-chance to expertly convert his fourth goal of the season deep into stoppage time to snatch a share of the points.

palace dented by their rivals, and only have themselves to blame 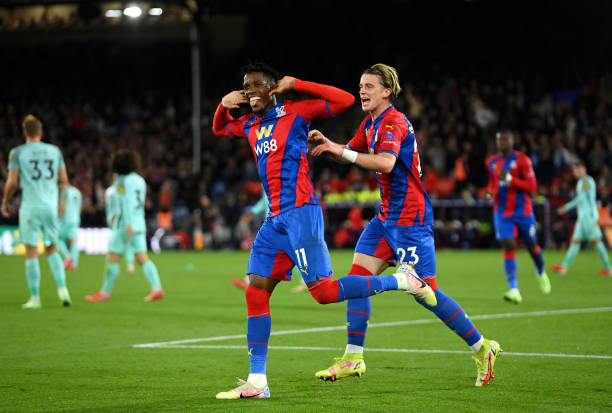 Zaha celebrates his penalty opener with the man who earned it, Chelsea loanee Conor Gallagher

It feels characteristic of their limitations as a team that Crystal Palace would crumble the way they did and yet, equally frustrating things unfolded so quickly at Selhurst Park overnight.

One Danny Welbeck promising chance aside, the Eagles felt firmly on top in a first-half with plenty of purpose but not enough execution. Conor Gallagher’s energy and fearlessness created the breakthrough, though he still needed Leandro Trossard to commit a clumsy foul in the area.

Wilfried Zaha gladly gobbled up the spot-kick, sending Robert Sanchez the wrong way and firing into the bottom corner after a half where the Ivorian himself didn’t exactly light up proceedings.

That goal proved the tonic he needed to up his effort levels in the second-half and the Palace fans watching appreciated their talismanic forward tracking back dilligently with plays like these:

Zaha was dispossessed deep in his own half, but made a recovery to send Joel Veltman sprawling

Jordan Ayew spurned a golden chance to double their lead from close-range, firing into the side netting during a second-half where the momentum swung again after Potter’s decision shifting to a 4-3-3 formation, sacrificing Dan Burn for Steven Alzate with an extra midfielder in tow.

Then, of course, Palace were stung for not wrapping up the three points earlier. However, there’s a key reason why the 28-year-old will feel like his career hasn’t reached heights once promised.

Failure to close out winnable games like this add up over a 38-game campaign and having finished the 2020-21 year a whopping 21 points adrift of David Moyes’ West Ham – a side who finished two places and four points lower than them the season prior – rather speaks volumes.

So while Declan Rice, Michail Antonio and co rejoice on their Europa League adventures, Zaha – who hasn’t hidden his desire for a move to clubs competing in Europe – feels unfufilled.

Zaha’s career dilemma, packed with rejected approaches, has been covered in recent seasons and statistics like these don’t exactly diminish the belief among many that he’s a flat-track bully. 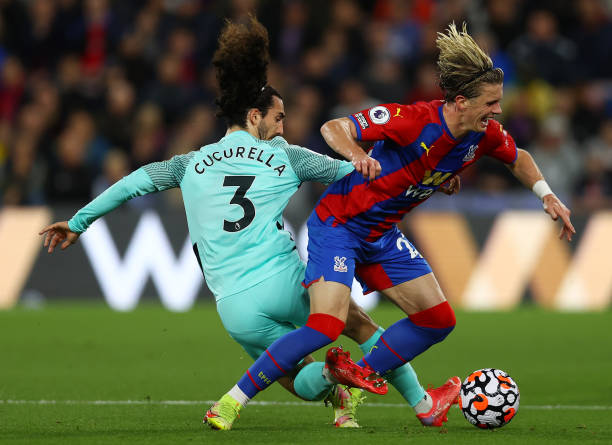 Anyway, my focus for this M23 derby was centred on a handful of younger players: Gallagher’s infectious attitude and current ability in the Palace midfield have already made him a mainstay under Patrick Vieira, after being ineligible to face parent club Chelsea as they lost 3-0 on MD1.

Versatile fullback Marc Cucurella was a shrewd £16.2m deal by Graham Potter on deadline day, as the former Barcelona man – 23 in July – continued his steady start to life in England.

I wrote this piece two years ago last month on the Seagulls doing similar by signing Maupay, and no teammate comes close to his 22 league goals since joining for £19.8m from Brentford.

Multiple flashpoints mean he’s developed a reputation as somewhat of a wind-up merchant which leads to tension from opposition players (and their fans), but his unapologetic attitude is part of what gives him an edge that, quite frankly, Brighton would be naive to try stifling.

Having missed more big chances (21) than he scored over the past two seasons (18), there’s an onus on the Frenchman to hone his clinical edge in-front of goal this term and not overthink chances. Four goals in six games is a brilliant start, but he can’t afford to rest on his laurels.

The degree of difficulty here is higher than Maupay makes it look, deftly chipping a retreating Guaita

Marc Guehi, a £21m signing from Chelsea in July, has settled to top-flight football quickly and is building up a partnership alongside Joachim Andersen as Vieira’s top centre-back pairing.

After a year-and-a-half with Swansea, that Championship experience only served to whet his appetite for more at an even higher level after the Swans lost to Brentford in the playoff final.

Considering his situation in west London, it’s not exactly a surprise that he opted against staying at Chelsea – more a signal of Palace’s intent to get younger and in turn, better for it.

More than anything, it’s the 21-year-old’s calming assurance and ability to step out from deep that will provide dividends going forward. Moments like these are worth their weight in gold:

Trossard tries shrugging him off the ball, Guehi has other ideas and calmly plays out of danger

Cleaning up Milivojevic’s mistake in possession, with Maupay and Lallana lurking intently to pounce

Forward thinking: 40 seconds after this clip, Gallagher wins Palace’s penalty and it’s no surprise considering his CB is comfortable being so high up the pitch scanning for forward options

Brighton would’ve topped the Premier League table for the first time in club history with a win, but did well to snatch a point at the death. They host a rejuvenuated yet unpredictable Arsenal this weekend in another televised fixture, before the international break is back in full swing.

Palace can’t afford to lick their wounds for long with Brendan Rodgers’ Leicester in the south on Sunday afternoon. They’re without a clean sheet in their last five H2H meetings, and are winless in each of the last four duels – dating back to when Claude Puel was in charge of the Foxes.