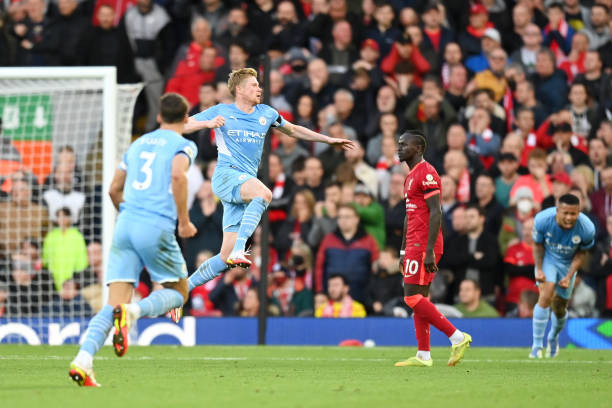 Despite Manchester City’s initial dominance in the early exchanges, this game lived up to the billing: contentious officiating, big moments, goals aplenty before a goal-saving block in a second-half frenzy – finely poised and still could’ve swung either way until the final whistle.

Both managers satisfied after back-and-forth second 45 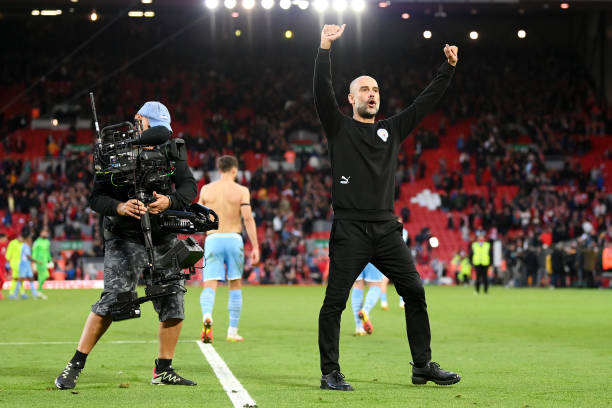 Pep acknowledges the travelling City fans after a frenetic finish, ending a busy week away from home

Pep Guardiola said this game reiterated why the Premier League is the world’s best and was proud of his players, digging deep to snatch a point at Anfield. Truthfully, they should’ve been at least two goals ahead before half-time and instead their boss warned them of what was to come.

Phil Foden had two contrasting attempts thwarted by Alisson, one at close-range and another 20 minutes later as he tried to go around him in the box after Ederson’s inch-perfect through ball.

Kevin de Bruyne headed a good chance over the bar at the far post as the Citizens‘ pressure intensified, minutes after feeling aggrieved they weren’t awarded a penalty – or at least a freekick – as makeshift fullback James Milner clumsily bundled into Foden on the edge of the area.

Guardiola’s opposite number, Jurgen Klopp, said it’d be a bit cheeky for him to be upset about the pair sharing the spoils. He didn’t need telling his team were sluggish, struggling to settle in a first-half where they were frequently overrun down the right and Milner was being targeted.

“We missed the extra pass completely in the first-half, but the second-half was what everyone expected from the start.

Massively, if you wanna play fullback, you better not start against City. You are really in [tough] situations, it was clear he should’ve been sent off… [laughs].”

Milner, whose versatility means he plays in multiple positions, filled in for Trent Alexander-Arnold (groin) against his former club here and found himself exposed by Foden without much support. 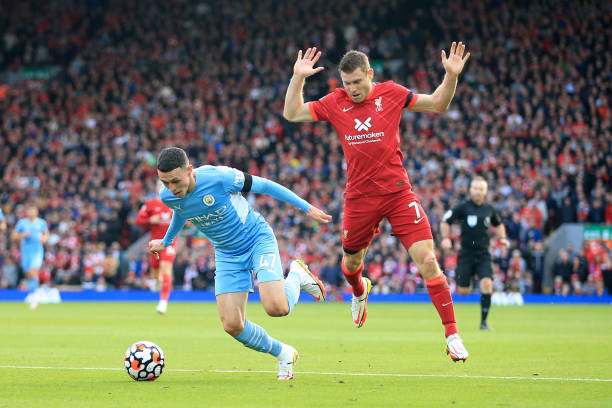 However, Liverpool adjusted and collectively improved after the interval as Foden – previously a livewire – was frequently isolated on the flank, as the hosts intensified their off-ball pressing.

The tables turned in the second-half, as City were suddenly looking tentative and vulnerable themselves for the first 20 minutes. Rodri had his pocket picked a few times in midfield, Diogo Jota looked dangerous on the turn and forced Ederson into action from a well-taken snapshot.

Then, the hosts broke the deadlock with aplomb as Milner’s opposite number Joao Cancelo looked lost at sea, high up the pitch, and produced a weak tackle attempt in the build-up.

Mohamed Salah sped away while leaving the Portuguese in his wake, released Sadio Mane ahead of him and wheeled away to celebrate as the one-two punch confirmed City’s worst fears.

That first-half dominance, without reward, had come back to bite them. Mane’s 99th Premier League goal was well-taken, but there was more Salah magic for the Anfield crowd to savour.

First though, Foden atoned for his earlier misses from a tough angle to roar the visitors back level. Gabriel Jesus, their unsung hero, was decisive in the build-up. After Bernardo Silva and de Bruyne progressed the ball forward, he took it in his stride and charged at the Reds’ backline.

He marauded with purpose, leaving an indecisive Andy Robertson in his wake before evading Curtis Jones and Fabinho as if neither were there.

Virgil van Dijk came out to approach him, but couldn’t stop the Brazilian’s pass. He picked out Foden, unmarked on the left, and left the 21-year-old to finish with fury into the far corner.

It was nothing less than City deserved and suddenly, game on again.

Liverpool should’ve been down to ten men with little over 15 minutes to go. Silva weaved past Jordan Henderson and was hauled down by a tactical foul Milner made, on a booking.

Guardiola was visibly fuming at referee Paul Tierney’s decision and got booked himself, while Klopp made sure to replace him – but not before the hosts were back in the lead once more.

Cancelo was criticised for his positioning but Salah was the conductor for Mane’s opener and while Jones will get an assist for passing into the Egyptian’s feet, he certainly had plenty to do.

The move and goal itself felt exactly like the sort of matchwinning defiance Salah has often longed to produce, putting the exclamation mark to his frustrations since last December. 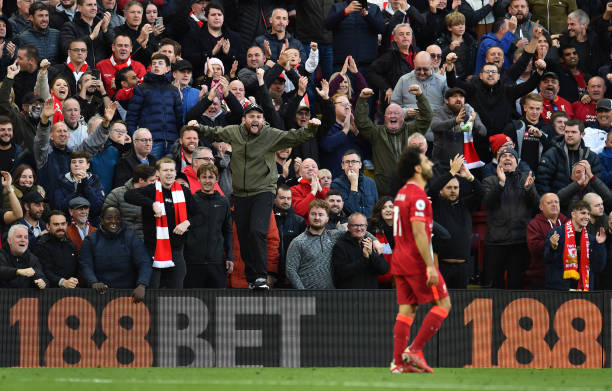 Again, Cancelo was punished for being overzealous in the tackle and visibly out of position. Foden could only sheepishly push him, as his quick feet sat Silva down. Next up was Aymeric Laporte, who he left trying to recover after being wrongfooted with a chop onto his right foot.

Ruben Dias tried to make a last-ditch recovery and save for his centre-back partner but it was too late. Salah had already unleashed a strike nestling into the far corner, as City were stunned again.

They weren’t finished either, though. de Bruyne, who looked exhausted at times and off-colour in others, was creator-in-chief en route to his first league goal since the final day last season.

After receiving another pass from Silva, he scanned for forward options and swung an inviting ball out to the flank for Foden, firing across the box. Robertson’s clearance fell to the Belgian, who let fly on the edge of the area and watched it take a deflection off Joel Matip to equalise.

Another twist, another turn.

Pep reserved praise for Rodri among others post-match and was justified in doing so. The 25-year-old made a perfect sliding block to thwart Fabinho from firing home into an empty net after Ederson misjudged the flight of an inswinging Liverpool freekick and was stuck in no man’s land. 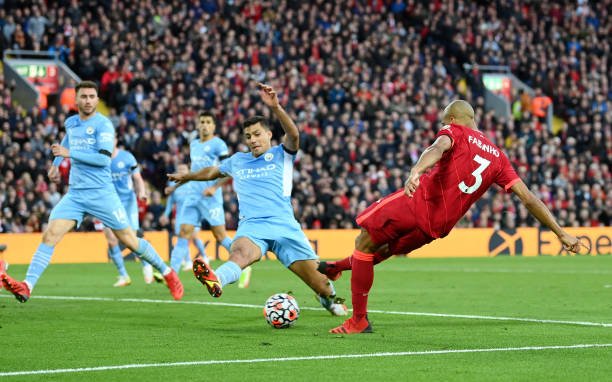 Rodri’s goal-saving block, after Ederson (out of shot) made a mess of Liverpool’s setpiece

Robertson made an important stoppage-time block to thwart Jesus as both sides threw caution to the wind in pursuit of all three points, but ultimately, Liverpool’s unbeaten start remains.

This was an unmissable game and among other things, will reinforce the leaguewide narrative that City and Liverpool are the teams to beat – especially after Chelsea’s shaky stumble of late. 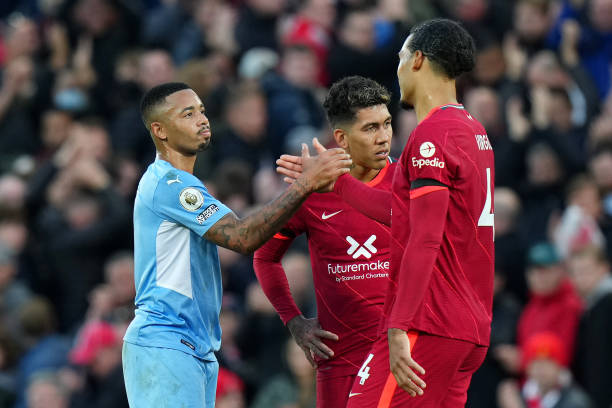 The latest international break starts next week, so both sides aren’t in league action again until October 16. Liverpool travel to Hertfordshire against newly-promoted Watford, under new management – reportedly Claudio Ranieri – as Xisco Munoz was sacked after they lost to Leeds.

Manchester City, who’ve endured an unenviable week with three very difficult away trips and mixed success (Chelsea, PSG and Liverpool), host Burnley in one of that day’s 3pm kick-offs.

When you don’t have courage or are scared here, you don’t have a chance. We were incredible and lost 2-0 in Paris. Stamford Bridge [Chelsea] and Anfield, to play like this? I’m very proud, it’s nice but especially away [from home].”

Manchester United (4th) could only draw with Everton (5th) yesterday, while Brighton should’ve followed up their gritty point in south London with all three vs. Arsenal on Saturday evening.