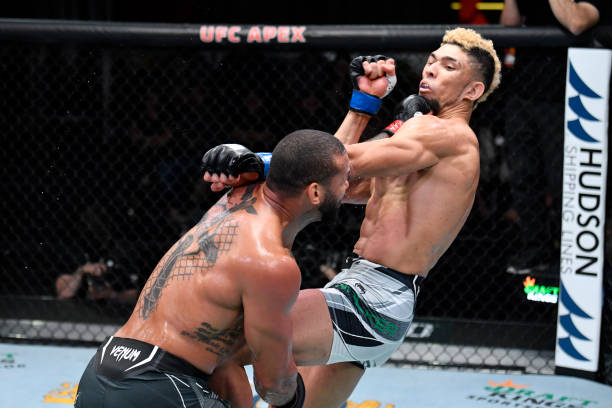 It wasn’t a vintage performance, but former light-heavyweight title challenger Thiago Santos produced a vitally important decision win (48-47 x 3) over Johnny Walker in the main event on the final fight of his existing contract. Afterwards, he called out Jiri Prochazka (#2) – who is the alternate for this month’s championship fight between Jan Blachowicz and Glover Teixeira. 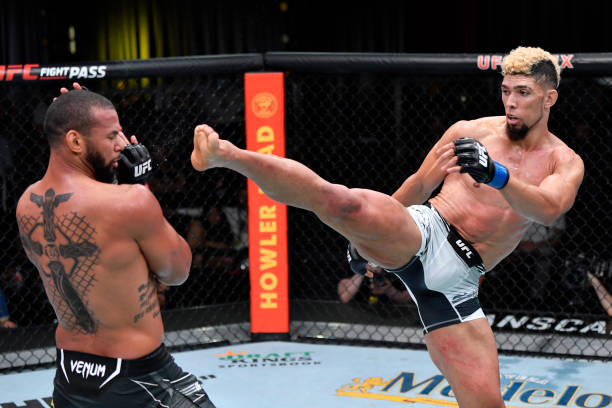 Critics are unsure whether Santos, 38 in January, remains a bonafide title contender at 205lbs

“First of all, I need to tell something. People know what I went through [with injuries and losses], I fight every single day to be here and will not stop. I went through hard times since I did my surgery, it’s hard to recover.

I stopped fighting for a year-and-a-half. No-one run me over, it’s a tough fight, I fought against tough guys and feel better, it’s important to me. I go down and up, was 100% going to fight better against Johnny and this happened.

I think I deserve something more, I want the champion, I deserve top-5, one more fight and I can go to the title shot again.”

Walker came into this matchup with the shortest average fight time among active UFC fighters (3:46) as well as a credible penchant for knockouts. However, while there was plenty to like from the rangy Brazilian, the general consensus remained the same – if only he could execute better…

Santos, who had been involved in a back-and-forth main event battle against compatriot Teixeira last November, did similar here with another Brazilian across from him.

Only difference was, this went the full five rounds – much to many’s disappointment, given Marreta’s pre-fight words. If he expects to return to top billing at 205lbs after this, he’s mistaken.

There’s a reason why Jiri Prochazka, who he’s now actively calling out, has been favoured to Aleksandar Rakic as far as championship-contending pecking order is concerned.

Prochazka moves the needle, has already proven himself to be must-watch TV given his style and has 30 fights’ worth of experience from many years at Rizin as well as other promotions.

He blasted past Volkan Oezdemir on his debut last July, earned another Performance of the Night bonus to leave former title challenger Dominick Reyes needing a long layoff in May and is trending upwards at a rate many didn’t expect – even in a division as shallow as LHW is.

Assuming all goes well and he doesn’t replace either Blachowicz or Teixeira as the alternate on Oct. 30, it’d make sense that he would want another fight given there’s plenty of uncertainty about just how long he would be left waiting for the champion after their Abu Dhabi adventure.

Santos could easily find himself on the Czech’s highlight reel if he’s not careful, because while others have proven age is just a number, Marreta’s style hasn’t matured well against the top contenders. It’s an ambitious callout and given his injuries, not one I’d advise he push for yet.

Other results as co-main ends with a whimper, Jotko and Hernandez win

Considering all the intrigue surrounding Kevin Holland‘s improved wrestling, there was an underwhelming end for him as his middleweight bout with Kyle Daukaus ended in a no contest, after an accidental clash of heads deep in round one (3:43) left Trailblazer briefly unconscious.

At least there was one promising brief snippet:

"A little better, right, DC?"@Trailblaze2top is showing off the improved takedown defense at #UFCVegas38 pic.twitter.com/MRNkyvVgDk

At welterweight, Niko Price returned to winning ways with his first official win since October 2019 with a UD result over Alex Oliveira (29-28 x 3). He was 0-2 with one no contest beforehand.

Mike Breeden missed the lightweight non-title fight limit and got starched in just 80 seconds against a purposeful Alexander Hernandez display.

BACK IN A MAJOR WAY 💯@TheGreat155 was relentless in pursuit of the finish at #UFCVegas38 pic.twitter.com/zbasn4UoME

The 29-year-old, who lost to Thiago Moises on Feb. 27, is another man back in the winner’s circle after landing a series of punches backing Breeden up against the cage. An overhand right ended the night emphatically, leaving the 32-year-old slumped with his back to the fence. 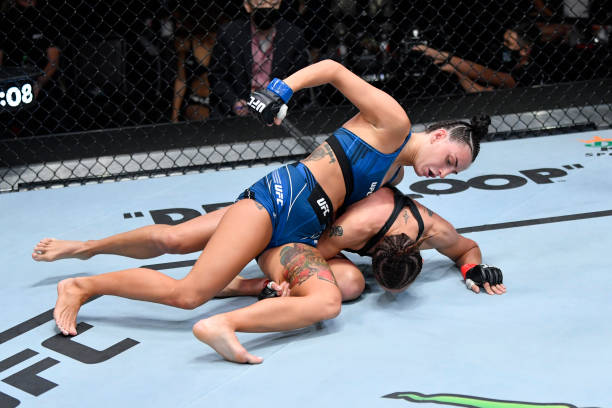 In the featured prelim, experienced lightweight Jared Gordon continued his post-lockdown form with a third straight win to end Contender Series graduate Joe Solecki‘s 3-0 UFC streak – even if this was the 33-year-old’s first split decision result of his career (28-29, 29-28 x 2).

Her younger sister landed some nasty ground and pound en route to another championship defence last weekend, but Antonina Shevchenko suffered another R2 stoppage loss – elbows and multiple punches raining down on her by Scottish-born Australian prospect Casey O’Neill.

In a catchweight bout between two Brazilians, Karol Rosa (#15) cruised to victory and protected her ranking vs. former bantamweight title challenger Bethe Correia, winning 30-27 x 2, 30-26 on the scorecards while recording more than 100 significant strikes for the third time in four fights.

Correia announced her retirement from MMA competition post-fight, having shown toughness in spades to make the final horn – especially after being stunned late in R2.

Rosa said she’d like to return in February, while Correia said it was an emotional moment, having begun her pro career 8-0 before being blasted by Ronda Rousey in 34 seconds six years ago.

Brazilian bantamweight Douglas Silva de Andrade returned to winning ways with a punch-perfect R1 finish vs. Gaetano Pirrello, needing little over two minutes to secure his 20th career knockout in emphatic style – unsurprisingly a Performance of the Night winner ($50,000) too.

One week shy of a year since she suffered a UD loss to Tracy Cortez on her UFC debut, Swiss bantamweight Stephanie Egger earned her first promotional win the hard way – fending off a first-round leg lock before swarming Shanna Young on the ground in R2 to a TKO (elbow) finish.

Unsurprisingly, the 30-year-old spoke of a desire to fight again as soon as possible because she’s enjoying her time in the company.

In the night’s opener at bantamweight, Alejandro Perez earned a second-round submission win via armbar against Johnny Eduardo. It was his first appearance after successive defeats in a four-month span two years ago, against Cody Stamann and Song Yadong.

Post-fight, he thanked Cormier for “showing him some things”, as one of his teammates at AKA.