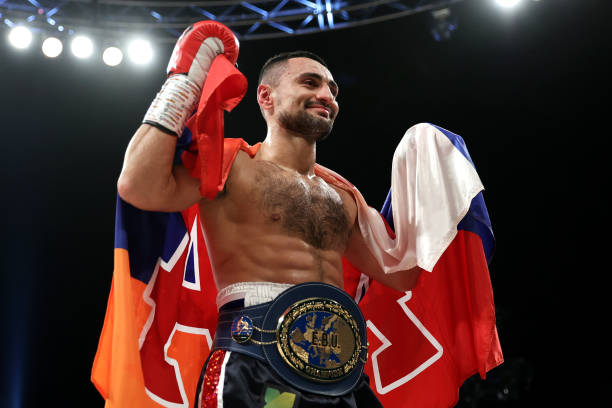 Having made the fourth defence of his European welterweight title on Saturday, the 33-year-old Russian (28-3-1, 16 KOs) wants a return to world level after defeats by Lamont Peterson and Egidijus Kavaliauskas on his last two US visits in big bouts. His trainer Carl Greaves and manager Neil Marsh emphasised that belief, after his emphatic showing this past weekend. 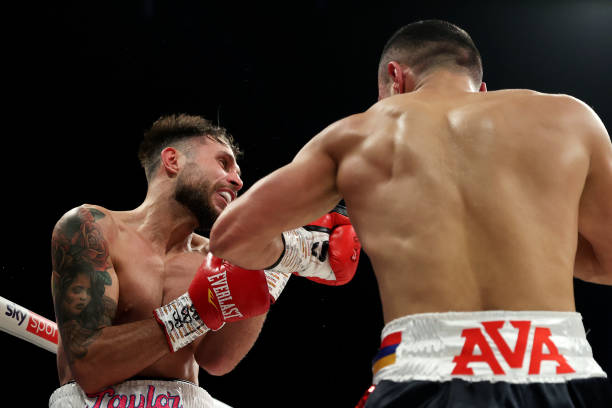 Avanesyan proved too slick, too power and too much for title challenger Liam Taylor on Saturday

On a bill set to be headlined by Chris Eubank Jr’s return before his opponent was forced to pull out, instead there was fanfare aplenty for an experienced welterweight that again reinforced his credentials as one of the world’s best in Russian-born Armenian boxer David Avanesyan.

Now based in England with British representation, the 33-year-old’s time at the top table won’t last forever and it makes sense that his team are making serious noise about a world title fight.

As quoted by Sky Sports, his trainer expressed a need for urgency going forward post-fight:

“Listen, you’ve got to be a strong puncher to keep David off, or he will keep walking through you like he did tonight. He [Taylor] took a heavy shot, the referee did the right thing because this man is a great finisher, a predator. What is it, five stoppages back-to-back? All at a good level. We need to move on now.”

He’s not the only one. 23-year-old prospect Vergil Ortiz Jr, who earned an eighth-round TKO victory over Mean Machine in August, has recently expressed an interest in fighting Ugas too.

“I would love that fight, I don’t see why not, I’m basically right under him. As far as it’d play out, I really don’t know but it would be an exciting fight – that’s the only thing I’m sure on.”

Ugas has other plans to sort out, avanesyan’s past costing him 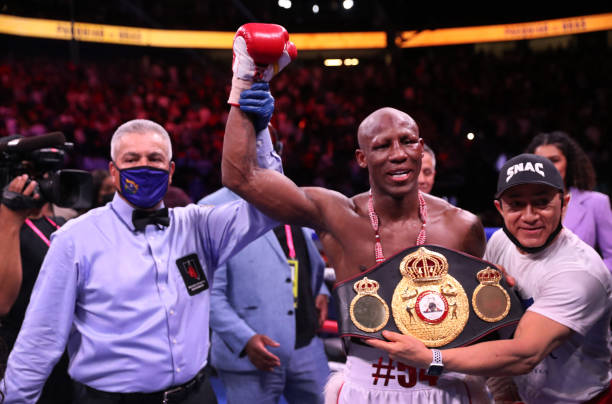 Ugas celebrates after earning a surprise UD win vs. Pacquiao in August, sending him into retirement

As part of the WBA’s effort to clamp down on the number of titles they possess, Ugas – their super champion – has been ordered to face #1 contender Lithuania’s Eimantas Stanionis next.

Jamal James, the regular champion, is scheduled to defend his position against Russia’s Radzhab Butaev on October 30.

Ortiz Jr (#2 WBA and WBC, #5 IBF, #1 WBO) has earned his place among the elite at 147lbs but while Avanesyan has faced lesser opposition of late, he looks to belong in a different league.

“Ugas seems to be the easiest [to make], because Spence is a bit unsure with his career and I don’t think there’s a fight scheduled.

Terence Crawford is scheduled to fight Shawn Porter, so the obvious one is one who just boxed against a legend – his profile has gone through the roof.

He looks a good fighter, so yes, we are just trying to pick potentially the easy one to get hold of, more than necessarily the easiest opponent.”

Errol Spence Jr (eye) will likely return sometime next year but a timeline remains unclear, while the Crawford-Porter bout on November 20 could open up the field for potential new challengers.

READ: If Bud is the division’s pinnacle, will Shawn Porter finally rise to the occasion?

Avanesyan isn’t getting any younger at 33 and while TKO wins over Josh Kelly and Liam Taylor are impressive, they don’t do much besides defending a belt he should’ve already outgrown.

Had he beat Lamont Peterson in February 2017, his next fight could’ve been against Spence. If he didn’t suffer a sixth-round stoppage defeat by Kavaliauskas twelve months later, he could’ve fought Crawford for his WBO belt pre-pandemic instead of Mean Machine with more activity.