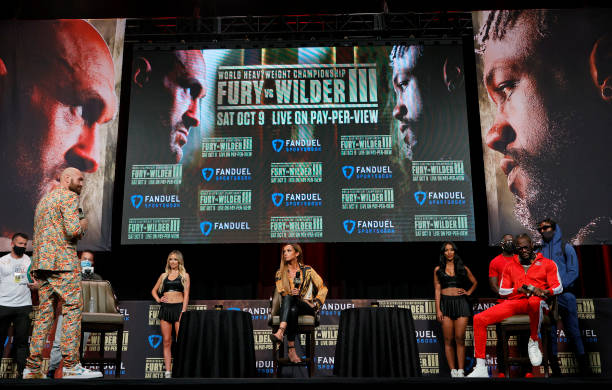 596 days after their rematch saw an unbeaten streak emphatically ended, Deontay Wilder looks to reclaim gold against the always-jovial Tyson Fury this weekend, who expects to leave the US with a WBC title defence and boosted in pursuit of being crowned king of the heavyweights.

Fury-Wilder 3: just like one and two, plenty at stake for both 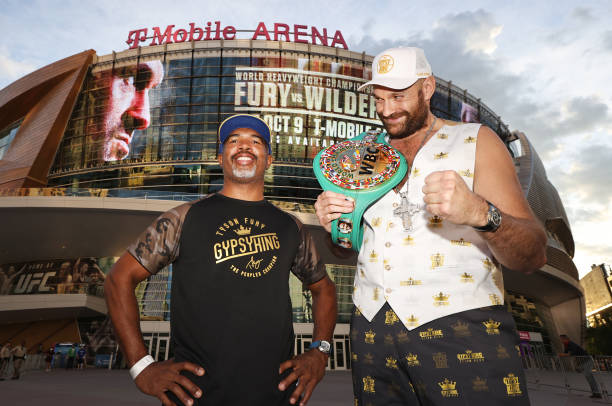 All smiles: Fury pictured with his trainer, Sugar Hill Steward, as they arrive at the pre-fight presser

Rejuvenated, reinvented with the best training camp of his entire career. Those are refreshing buzz words to hear from Wilder, who has unfinished business to take care of this weekend.

Simply put, Fury absorbed the power-puncher’s best shots and continued walking forward, before decimating him with an attack-heavy approach that stunned many in February 2020.

Press forward, walk him down, make things uncomfortable and ask questions of his [Wilder’s] suspect defensive abilities. That was the gameplan. Fury, who won most rounds in their initial fight, raised eyebrows with his KO admission – he wasn’t going to let this bout go the distance.

So although he didn’t get the round correct, it would have felt more fulfilling to win in such comprehensive fashion: Wilder’s camp threw in the towel. 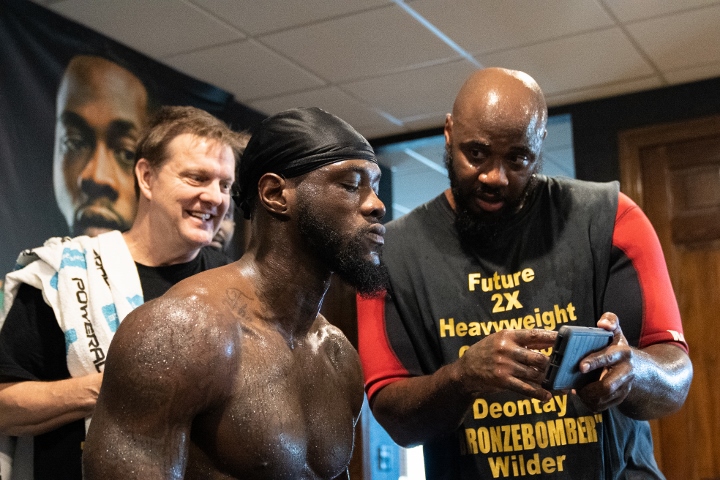 Wilder (centre), with Jay Deas and new trainer Malik Scott – who he fought and knocked out in 2014

That whole episode proved the catalyst for Wilder’s plethora of excuses afterwards, from spiked water and cheating accusations to the infamous walkout costume he wore to the ring too.

However, plenty of time has passed since then. We’ve endured a COVID-19 pandemic that will be talked about long after our lifetimes, perspective and introspection has been quietly established.

“You’re looking at a rejuvenated and reinvented Deontay Wilder, the old Deontay is no longer there. I can’t explain it to you, I have to show you on Oct. 9 – I’m looking forward to it, can’t wait.

“Malik is a wonderful person and trainer, we met years ago sparring with Tomasz Adamek. We clicked right away, formed a real bond and have so much love around me in this camp, that I’m not dwelling on anything negative.”

I feel amazing, this time that passed has been great for me, the more we’ve been able to work on different little things and perfect them. You can’t always be perfect, but that doesn’t mean you can’t train to be perfect. I’m super focused, more now than I’ve ever been – this the second phase of my career.”

Fury, for all the theatrics and fronting, is under no illusions over Wilder’s wicked knockout power – he defended his title for five years and stopped all opponents before the Brit (42-1-1, 41 KOs).

“You know, Wilder’s the biggest puncher in the history of our sport. It’s gonna be exciting, you know? Wilder’s a dynamite puncher and as we’ve seen over the last few months, the heavyweight landscape changes so much.

I’m still on form, doing what I’ve gotta do, and I’m the only undefeated world heavyweight champion left, the only one standing. Crazy!”

The winner of Saturday’s bout will be ordered to face WBC mandatory challenger Dillian Whyte or Sweden’s Otto Wallin (October 30, The O2 Arena) next, assuming they can’t agree terms on a unification bout vs. Anthony Joshua’s latest conqueror Usyk given AJ’s rematch clause.

There are so many questions that need answering this weekend. Even after being manhandled by the bigger man during their rematch, is Wilder’s weight gain wise as far as conditioning goes?

Deontay Wilder appears to have seriously bulked up for the Tyson Fury trilogy… pic.twitter.com/OHjlYtxAAq

Will Fury replicate that same press-forward style and look to get him out of there quicker than seven rounds definitively this time? Or be patient, risk getting stung and roll with the punches?

Fury has had the psychological upper hand between the pair since rising from the canvas after that seismic knockdown in R12 and ultimately winning that final round of their first meeting.

Will Wilder truly display the developments he’s stressed have been made, under new guidance with a “genius” in Malik Scott? It wouldn’t be surprising to see him KO Fury, but he’d have to connect with the perfect punch – like vs. Dominic Breazeale or the second Luis Ortiz fight.

an Undercard with prospects and unbeaten records must go 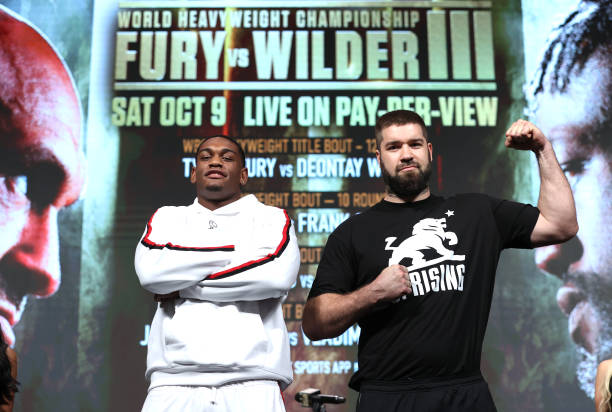