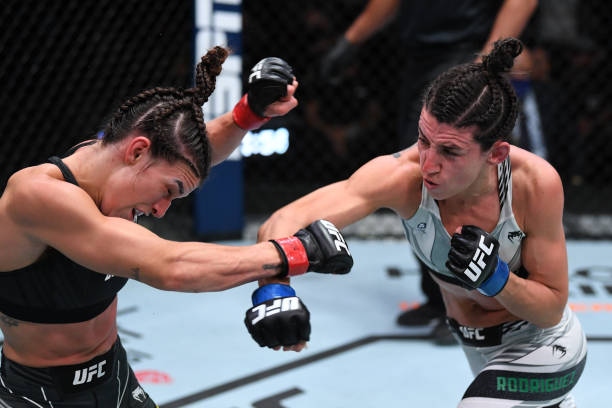 Surging strawweight contender Marina Rodriguez has dented two hype trains in 2021, first knocking out Amanda Ribas on Fight Island in January and now outlasting Brazilian jiu-jitsu black belt Mackenzie Dern on the scorecards during her second successive main event, after which she stressed a readiness to fight for UFC gold – displays like this make it feel inevitable. 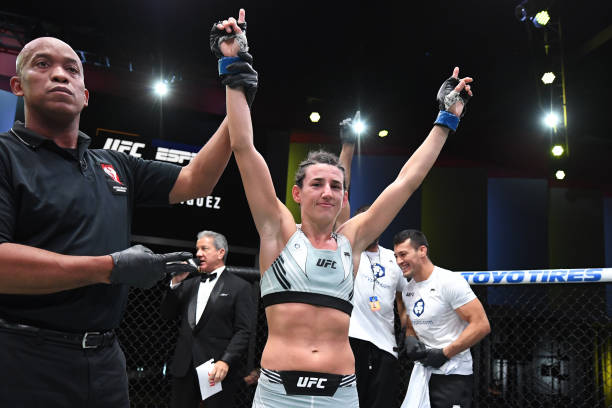 Despite some sticky moments on the ground, Rodriguez’s winning streak continues rolling

She had to walk through the fire on the ground against Dern, delving into particularly deep waters in a rough round two and again at times in the dying embers of round four.

However, the scene of her on coach Marcio Malko’s shoulders celebrating aloft before Bruce Buffer read out the scorecards felt provocative: she knew she’d won and comfortably too.

Considering the Dern-centric backdrop surrounding this main event, it was almost as if the promotion forgot what happened the last time they let Marina loose on another promising strawweight contender, nine months earlier, as she handed Amanda Ribas her first UFC loss.

Coming into this matchup, she had 48.9% significant strike success and only two strawweights boast better – Angela Hill (50.1%) and former champion Joanna Jedrzejczyk (49.4%).

It’s no wonder she was insistent on keeping this fight standing throughout, exposing Dern’s striking deficiencies and patiently picking her compatriot apart for sustained periods.

Her boxing was slick and distance management clear, making Dern miss frequently meant the #4 ranked contender – with husband and daughter in the crowd – knew she had to switch things up.

Dern tried to establish clinch work in round two and despite a half-hearted attempt early on being dismissed, she applied ample aggressiveness with a series of overhand rights to force the fight to the ground – confident if they scrambled, she’d be on top and in dominant position.

Rodriguez secured a defensive choke from the bottom but it didn’t appear tight, so once she bailed on the manoevure, Dern was able to spread her wings: showing great dexterity and awareness to manipulate Marina’s arms as she threatened armbars and rear-naked chokes.

Ground and pound strikes landed, trying to soften Rodriguez up enough to isolate a limb and secure a choke. As the clock ticked down, Dern kept her pinned but Marina survived the round.

That phrase couldn’t be said for rounds three-to-five, clinically outfoxing Dern with persistent movement and shrewd stand-up skills, while being cautious enough to defend takedowns.

Now 15-1-2 and riding a three-fight winning streak this year, her only loss was by split decision last July against former 115lb champion Carla Esparza (#3), who many believe deserved the next title shot against Rose Namajunas ahead of Zhang Weili at UFC 268 on November 6.

“It [her submissions] was never close, she hits hard but I was very aware that we had five rounds… part of the strategy, had to pace myself, we worked slower than usual but there was a point to it.

I’ve been ready to fight five rounds since the day I started, we know there are maybe some girls ahead of me in the line, but if they’re not ready, I will be. I was here on 10 days’ notice, so…”

Other results including wins for nicolau and agapova 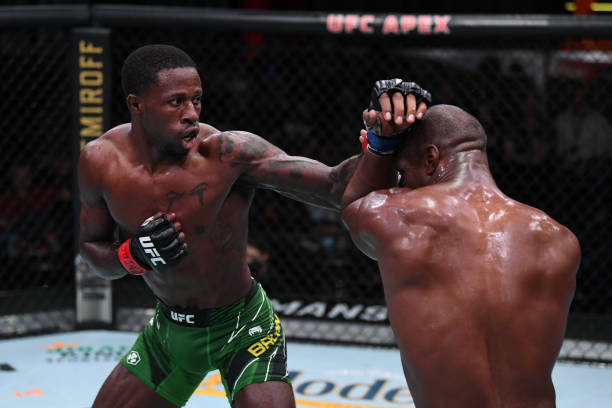 In the night’s co-main event at 174lbs, Randy Brown earned successive wins with a unanimous decision result against Jared Gooden – who came in overweight for this slated welterweight clash, and didn’t do enough to truly worry the Jamaican, in what resembled a kickboxing bout.

HOW IS HE STILL STANDING?! 🤯 #UFCVegas39 pic.twitter.com/9pTpB7u0z6

Brown, who wowed many with his fantastic first-round finish against Alex Oliveira at UFC 261, was clearly hampered by a toe injury but had a good poker face and chipped away at Gooden.

He had ice on his foot between rounds and Gooden, who had lost two of his last three heading into this matchup, was more accurate (54% strike success, 87 of 162 landed) but produced noticeably less output: being oustruck in all three points, even with Brown’s nagging problem.

Rudeboy, who suffered a second-round TKO by Vicente Luque last August, will probably need another win or two in a row under his belt before he gets another top-15 opponent next year. 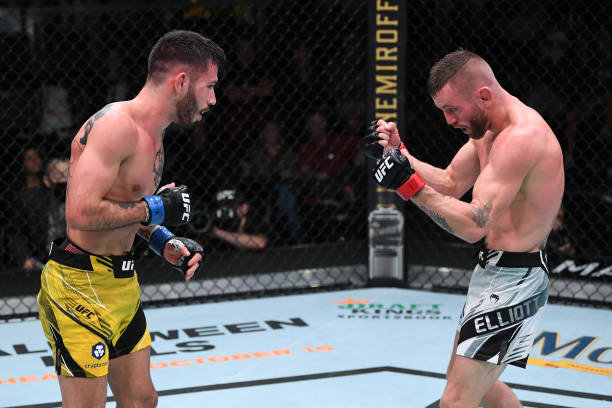 In a competitive clash, Elliott spent too much time playing around, as Nicolau took charge

In the flyweight division, Brazil’s Matheus Nicolau earned a second straight decision win – this time against Tim Elliott (#9), so will find himself in the top-10 rankings in next week’s update.

While there was plenty of questions surrounding his split decision victory over Manel Kape in mid-March, the same couldn’t be said here – so much so that coach James Krause expressed frustration on social media afterwards, that he didn’t tell Elliott to push harder in the final round. 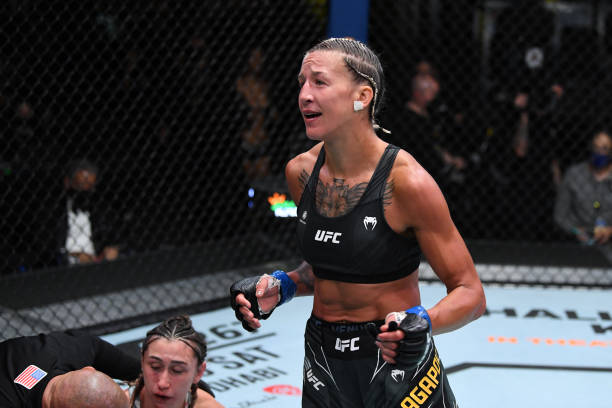 Women’s flyweight Mariya Agapova earned a beautiful third-round submission win over fellow 125-lb prospect Sabina Mazo via rear-naked choke – having flattened her with a right hook moments beforehand, then made sure to call out Maryna Moroz with a smile afterwards.

WHOA 😳@Mma_mashka stunned Sabina Mazo and submitted her in a matter of seconds at #UFCVegas39 pic.twitter.com/SeE227wt98

In the bantamweight division, Chris Gutierrez opened the card with a split decision win (28-29, 30-27, 30-27) over Felipe Colares – unbeaten in six fights, dating back to the TUF Finale against Raoni Barcelos in November 2018. It should’ve been unanimous, but he had other things to say:

Another heavyweight prospect to keep an eye on is Moldova’s Alexander Romanov, something Jared Vanderaa found out the hard way here en route to a second-round TKO finish. Now 15-0 and 4-0 in the promotion since debuting last September, the 30-year-old keeps on improving.

In the featherweight division, Damon Jackson made up for lost time and similarly returned to the win column with a UD win over Charles Rosa (29-28, 29-27, 30-27).

After being stopped midway through round one by rising star Ilia Topuria last December, he was scheduled to return on the Reyes-Prochazka card in May but two opponents withdrew.

He’ll be hoping for more stoppage wins in future, as this result snaps an eight-fight finishing streak for The Leech, in his second UFC run.

Godinez, who lost her 5-0 unbeaten record via split decision against wily veteran Jessica Penne in mid-April, had fights against Sarah Alpar (May 22) and Sam Hughes (COVID-19 protocols) cancelled, but made no mistake against a short-notice opponent who had won three straight.

Charlie Ontiveros had some flashy moves early on, but suffered a second straight UFC defeat by way of vicious ground-and-pound against lightweight Steve Garcia in the night’s opener.

Mean ground-and-pound got the job done for @MeanMachine505 😤 #UFCVegas39 pic.twitter.com/Giwtwcj01I

Having verbally submitted in round one to Kevin Holland last October, the 30-year-old remains winless in the promotion and his future is unclear after emphatic defeats.