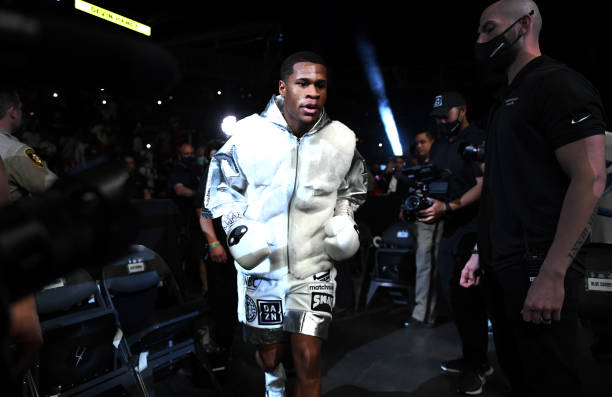 After passing the toughest test of his career to date in May, WBC lightweight champion Devin Haney needs to maintain independence if he’s to make the biggest fights possible. That’s according to father and coach Bill, discussing the benefits of his son’s position as a network free agent, while also highlighting Eddie Hearn and DAZN who will continue to work alongside him.

Give me my respect: Haney still awaiting his next opponent 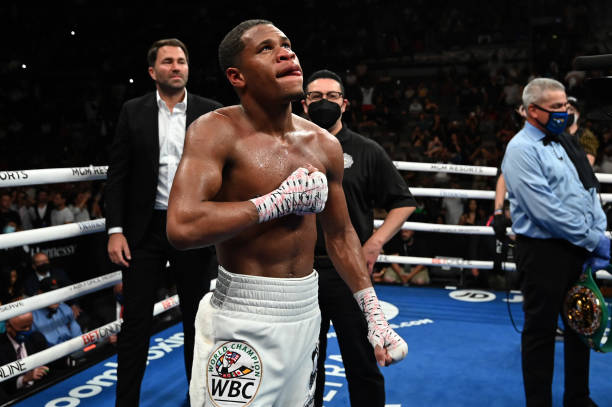 Haney celebrates after the UD scorecards are read out, with Hearn (far left) in the background

Haney (26-0, 15 KOs) has been an easy target for criticism after underwhelming displays in the past, but having shown steely resiliency to outlast a credible former multiple-division world champion in Jorge Linares, has positioned himself well in the ever-changing lightweight division.

“This is the biggest fight of my career, a victory should gain me a lot of respect. Winning this gives more reasons to all the writers, fans, boxing insiders, to campaign the unification fight with Teofimo Lopez, or at the very least, a world title defence against Ryan Garcia. I’m putting the pressure on them.”

Teofimo Lopez’s assistant coach Jorge Rubio namechecked the 22-year-old as who should be next in a unification bout, assuming he beats IBF mandatory challenger George Kambosos Jr.

That matchup still hasn’t happened, after five rescheduled dates, but is expected for mid-November under Eddie Hearn’s Matchroom banner as Triller were stripped of the hosting rights.

Haney’s decision win over Linares was the last of a multi-fight deal with Eddie Hearn and while it’s likely they’ll work again, Bill feels his son is better in a position where the public perception isn’t that his promoter and network purposely prevent him from facing opponents from rivals.

“Devin owns his own company, Devin Haney Promotions has the ability – even though we had a great co-promotional agreement with Eddie Hearn and Matchroom Boxing – we always had the ability to make the best fights happen.

What we wanted to do was kill that notion, that Devin isn’t the kind of fighter that can make the best fight happen on whatever network is available.”

Hearn fumed about the decision to make Ryan Garcia vs. Joseph Diaz – rather than ordering Diaz-Haney next – as the former interim titlist and existing one will now fight on November 27.

Garcia, who beat Luke Campbell to earn interim status in early January, was stripped of the belt after withdrawing from a summer defence because of mental health issues.