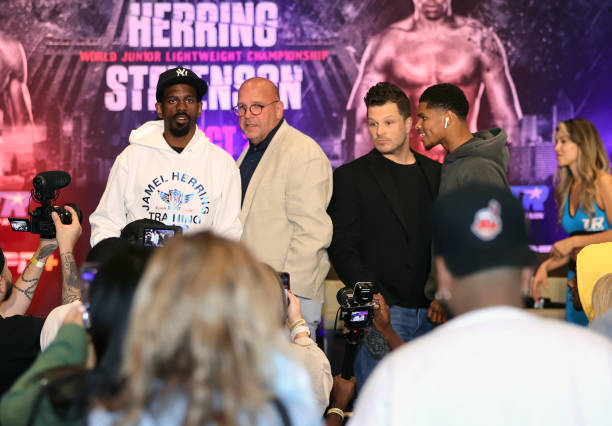 The biggest test of Shakur Stevenson’s budding professional career awaits this weekend in friend-turned-foe Jamel Herring (23-2, 11 KOs) and while their WBO super-featherweight title bout has some spice to it, the 24-year-old must leave his swagger in the changing room to win.

Herring-Stevenson: a pivotal bout the latter must not overlook 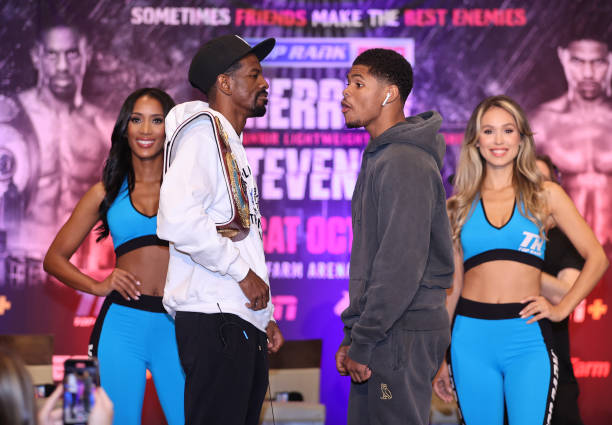 Stevenson (right) was distracted by opposing trainer Brian McIntyre during the face-off, and repeatedly touched Herring’s title before they were separated

Immediately afterwards, Shakur Stevenson – a friend of Herring – tweeted this:

In the six-and-a-half months since then, Herring has campaigned for a unification bout against Oscar Valdez, committed to fighting the Stevenson-Nakathila winner (then watched it live ringside) while also pouring cold water on critics suggesting he didn’t want to fight Shakur.

Stevenson meanwhile, picked holes in the aforementioned Frampton win – saying he wasn’t big nor strong enough while vowing to take Herring’s title in devastating fashion once it was ordered.

Herring, who has previously lost to Denis Shafikov (July 2016) and Ladarius Miller (August, 2017) fights better with his back to the wall as an underdog – like is the case again here. Whether you care about his military background or not, he’s the clear B-side despite being the champion.

As the date has drawn closer, this has felt like Lopez-Lomachenko last year – albeit without as much fanfare and anticipation, such has been Top Rank’s underwhelming coverage of this matchup. These same probing pre-fight questions were eventually answered by Teofimo.

In amongst all the pre-fight bravado, bullish promises and all: Lopez didn’t win emphatically, despite claiming he would. While he still hasn’t fought since winning those titles – for multiple reasons – Stevenson doesn’t exactly have the same devastating knockout power Teo poses.

From an optics standpoint, doing things like this aren’t going to help his case much:

Will he regret this? Stevenson was flustered by Bo-Mac and others in Thursday’s press conference

However, he too is considered by many to be one of the sport’s future stars and a victory this weekend against a credible step-up in opposition would go a long way to reinforcing that belief.

Stevenson outclassed Namibia’s Jeremiah Nakathila on June 12, but was again criticised by many for a seeming inability to finish despite his dominance and a fourth-round knockdown.

“He got touched, didn’t like it and didn’t react too well.

He still cruised to a good victory, but you could tell when he got hit, his whole gameplan changed up. I honestly expected more, but I feel like with Shakur, he’s OK with just winning rounds with the bare minimum at times.”

It feels like Stevenson wants to be like Gervonta Davis, Ryan Garcia and others as far as popularity and recognition is concerned. He’ll get there, with time. He just needs to focus on sharpening his skills and picking moments better, when to be risk-averse and when not to.

It’s good that he has an edge about him, but what will that do for him once the bell rings if he deviates from the gameplan so much and shrinks into a defensive, point-fighting style?

Armed with excellent technique and a 68-inch reach, Shakur will have to contend with slight physical disadvantages up against Herring (5’10, 70-inch reach) but for someone readily compared to Floyd Mayweather, it’ll be interesting to see how he fares this weekend.