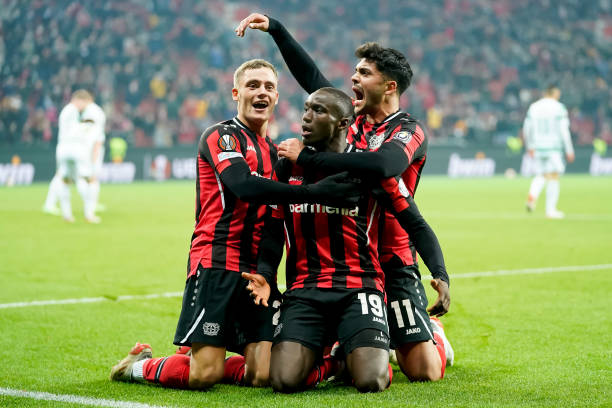 Although it looked like another thrashing was on the cards early on, this match quickly proved far from one-sided. Bundesliga side Bayer Leverkusen scored first and crucially finished strong under duress – overturning a 2-1 deficit late on – to sting a spirited Celtic showing, qualifying for next year’s Europa League knockout rounds as Group G winners with a game to spare.

Bayer blast out of the blocks 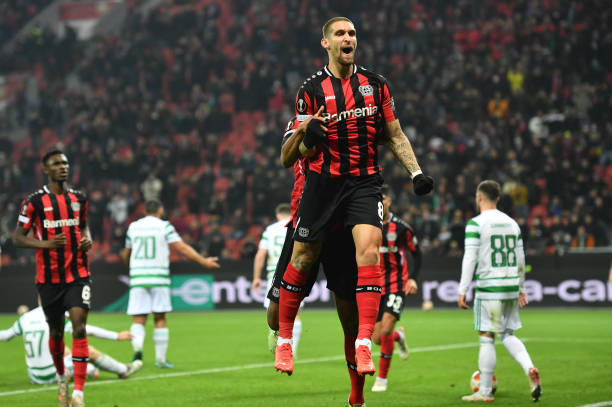 Andrich celebrates his headed opener from a Wirtz corner, atoning for his earlier miss

It took 25 minutes for Bayer Leverkusen to break the deadlock on MD2 at Celtic Park, but they were up and running earlier as Gerardo Seoane’s men maintained their unbeaten start to this season’s Europa League campaign in a back-and-forth battle buoyed by the woodwork.

All four of the Celtic backline were called into action to deal with potentially dangerous attacks early on and came out on top, with Amine Adli and their former teammate Jeremie Frimpong causing havoc in particular down the right-hand side. It was a sign of things to come.

Nir Bitton’s heavy touch in midfield was quickly pinched by an alert Leverkusen, who accelerated in numbers on the counter-attack. Robert Andrich headed over the bar from close-range during the resulting corner delivery, but that proved a warning sign that Celtic simply failed to heed.

Tottenham loanee Cameron Carter-Vickers made a pair of important defensive interventions in quick succession, first thwarting Frimpong’s dangerous ball as it fizzed across the box, then intercepting Florian Wirtz’s pass from meeting Adli in the box as B04 were again on the counter.

However, there wasn’t much the 23-year-old could do as Wirtz whipped another inviting corner into the area and this time, Andrich steered his header goalwards and left Joe Hart with no chance as it flew into the far corner.

Before the opener, Celtic seemed assured in possession in non-threatening areas but lacked numbers whenever they had the ball higher up the pitch.

Their response was one of an intensity increase, which was well handled by Jonathan Tah and his centre-back partner Odilon Kossounou, aware that high-octane approach couldn’t last. 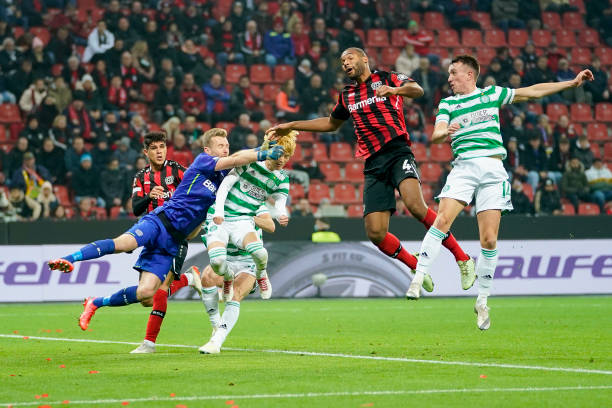 Hradecky closed his eyes as he charged forward, punching Furuhashi and not the ball as intended, as Celtic were gift-wrapped a penalty before half-time

What he couldn’t legislate for, was his captain and goalkeeper Lukas Hradecky gifting the visitors a penalty after cleaning out Kyogo Furuhashi as he charged to punch an inswinging cross clear.

After referee Tasos Sidiropoulos ensured the Japanese international was okay, he was told in-ear to check the pitchside monitor for a possible penalty. He did, and promptly pointed to the spot.

Croatian fullback Josip Juranovic stepped up and made no mistake to equalise, cooly slotting home a Panenka which crashed in off the underside of the bar for added effect. The first-half still wasn’t over though, with the woodwork coming to Celtic’s rescue twice in a matter of moments.

Juranovic was guilty of overplaying just outside the area and Wirtz teed up Moussa Diaby with a deft flick to his right. He struck a thunderbolt beyond Hart’s acrobatic dive, but watched it cannon back off the upright – before Wirtz hit the post on the rebound with the goal gaping.

Somehow, it was just 1-1 at half-time and Celtic had a golden opportunity to regroup.

Hart kept busy at one end, then sets them away to strike 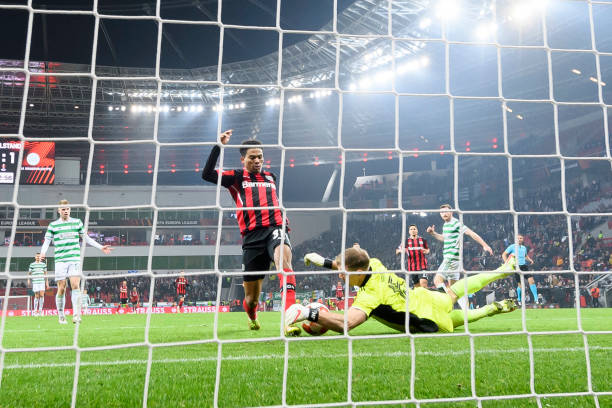 Hart somehow stopped Adli from scoring here, with the goal at the Frenchman’s mercy

Real Betis leading against Ferencvaros elsewhere in Group G meant there was plenty riding on this second-half, as far as their qualification hopes were concerned. Wirtz threaded through another defence-splitting pass, again for Diaby, who forced Hart into action.

The two-time Premier League winner with Manchester City made an excellent double save, first low with his legs, then stifling Adli’s effort on the rebound, where it seemed like an easy finish.

Hart then played a pivotal role minutes later from his own area, launching forward a long kick into James Forrest’s path which proved decisive as they scored a counter-attack of their own. 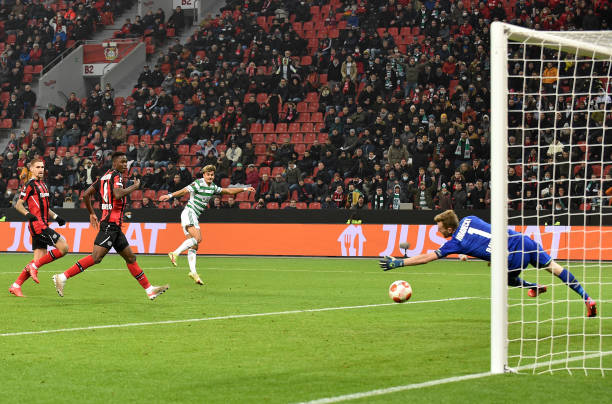 Celtic were ahead and suddenly had a lead to protect, but that ultimately proved their downfall.

Juranovic didn’t learn from his earlier mistake in possession and almost gave away another goalscoring opportunity, only for Bitton to make a key tackle as the visitors scampered clear.

Fresh legs were needed and Ange Postecoglou obliged with 20 minutes to play, as Liel Abada and Michael Johnston replaced Forrest and goalscorer Jota.

Hart was again called into action as Leverkusen pressed forward intently, denying Adli once more then a tame Paulinho header from another Wirtz delivery.

Seoane made changes too, as Daley Sinkgraven and Nadiem Amiri – both rotated out here – were introduced and played important roles in their late resurgence. Meanwhile, Celtic’s midfield protector Bitton had to be replaced after sustaining a head injury from an aerial collision. 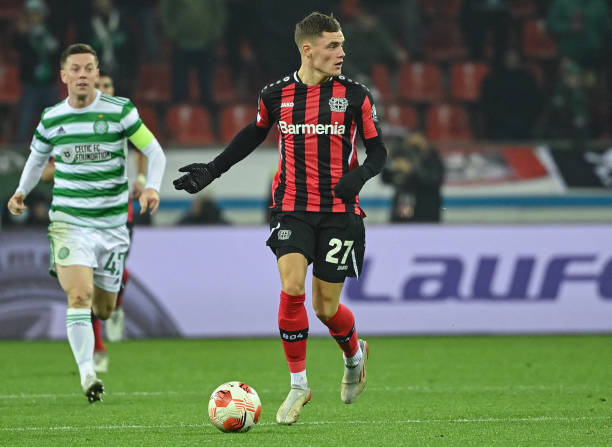 Wirtz was Leverkusen’s creator-in-chief as usual, with their dangerous attacks going through him

The wheels were turning and there was a sense of inevitability about how this would finish, as Hart made another sharp stop – using his feet to flick Adli’s close-range chance over the bar.

Leverkusen were energised by Celtic’s scrappy attempts at seeing the game out, having slowed drastically with half-hearted clearances as spaces opened up. Two minutes later, it was 2-2.

Wirtz scanned for forward options and lofted a great ball towards the far corner for Amiri, who teed up Andrich to slam hard and low through Hart’s legs – completing his brace.

Five minutes more and the comeback was complete. Wirtz again at the forefront of Leverkusen’s attacks, this time picking out Diaby who wouldn’t be denied a third time.

He fired a defiant volley into the far corner and while Hart would’ve been disappointed not to stop Andrich’s second, there wasn’t much he could do to deny the Frenchman later on.

Sinkgraven made a key sliding interception and two tackles as Celtic hustled, harrying their way forward down the flanks trying desperately to snatch a draw from a game they once led.

They almost had one too, as Anthony Ralston’s inviting delivery was flicked goalwards by David Turnbull. Hradecky made a diving save to claw the ball away from creeping in at his near post, his first stop of the evening with virtually the final kick of the game. 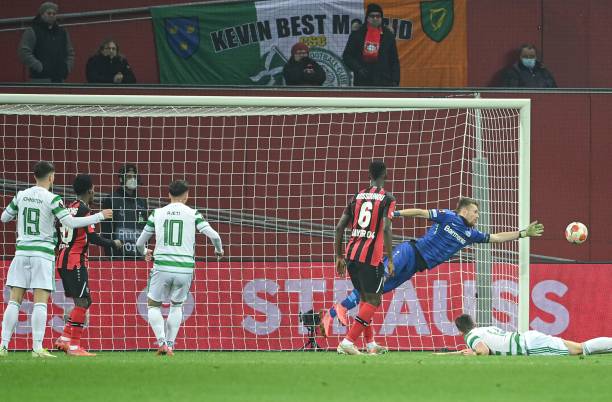 Leverkusen face a tricky away trip against an unpredictable RB Leipzig side on Sunday (1630 KO), while Celtic look to continue their favourable H2H record when Aberdeen visit them (1500 KO).

Celtic, who will entertain Real Betis on MD6 without a now-suspended Cameron Carter-Vickers, are mathematically bound for the Europa Conference League knockout rounds after Christmas.

Leverkusen, who travel to Hungary on Dec. 9, will stay top regardless of results elsewhere as they have a superior H2H record against the Spaniards.

Comeback complete and a lead to protect, Wirtz came off to a warm reception from the home fans as Seoane looked to shore up defensively – centre-back Edmond Tapsoba on in his place.

When you take a step back and acknowledge what you’re watching, it’s remarkable to think Wirtz is still only 18 and producing statistics like these:

Florian Wirtz in the Bundesliga this season:

Florian Wirtz in the #UEL this season:

This kid is special. 🤩 pic.twitter.com/4F2c8p5zQE

While Frimpong took everyone on in the role of a motivated man on a mission against his old club, Diaby felt isolated all too often to make a consistent impact. It was Wirtz, their creator-in-chief, who took control of a game that could’ve easily swung either way by the full-time whistle.

Funnily enough, he didn’t even play particularly well here either – he lost possession more than anyone else for the hosts (20) and most were quite cheaply by his standards, missed an open goal just before half-time and on another day, would’ve had four or five goal involvements easily.

I remember writing a match report on Leverkusen just as things resumed post-lockdown and Wirtz stood out that day too, in what was only his second Bundesliga start.

Kai Havertz was then what Wirtz has quickly become for B04, and since leaving for an eyewatering transfer fee to join Chelsea, his compatriot scored the Champions League-clinching winner this summer and is part of a team challenging on all fronts this term.

Alongside Bayern’s exciting Jamal Musiala and Karim Adeyemi at Red Bull Salzburg, Wirtz is part of a teenage trio tasked with helping progress the Hansi Flick era on the international stage.

But if he’s able to continue producing displays like these on a consistent basis across all competitions, it’ll only see his stock rise even further as interested suitors monitor his progress.