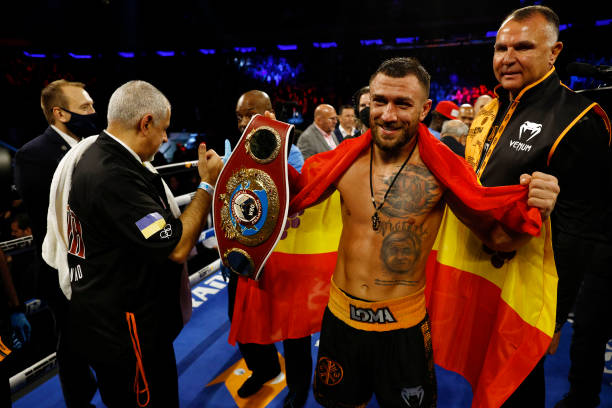 In a sport-packed weekend filled with thrills and spills, it was business as usual in New York for one of boxing’s pound-for-pound stars Vasiliy Lomachenko in the early hours on Sunday (BST), as he eased to a dominant UD win over gamely former IBF lightweight titlist Richard Commey. Unsurprisingly afterwards, he put his hat in the George Kambosos Jr title bout conversation. 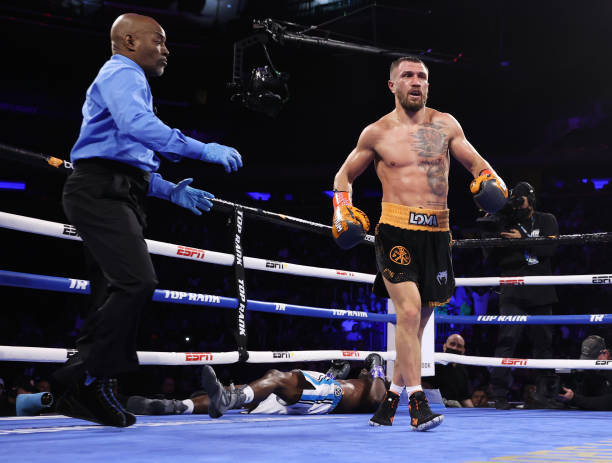 Lomachenko walks over to a neutral corner after scoring a seventh-round knockdown vs. Commey

Before Dustin Poirier’s 155lb UFC title aspirations went up in smoke again as 18,471 watched on from Las Vegas’ T-Mobile Arena, a former champion’s credentials were furiously reinforced with less fanfare — 2,500 miles away from the illustrious Madison Square Garden in New York.

Lou DiBella, Commey’s promoter, was surprised his fighter withstood a fiery seventh round as Lomachenko knocked him down with a straight left hand and unloaded punishment aplenty.

“I don’t know how he fought through that, and I give his corner credit for knowing their fighter well, because he actually had a couple of his best rounds after that. The way he came back and fought eight through 12, it was a one-sided fight but the kind you’ll remember.

I’m so proud of him, because that was the effort of a real warrior and Loma fought like the genius he is. He’s a tremendously skilled craftsman, technician, remarkable footwork and it was an excellent performance.”

Billed as Some Forces Can’t Be Contained, the phrase was apt as Lomachenko produced the sort of superb showing that has accelerated his plaudits while getting enviable looks from detractors.

After all, even with his illustrious amateur background (396-1) and status as a two-time Olympic gold medallist, Loma made his 18th professional appearance (16-2, 11 KOs) at the weekend.

That low number, given he’s 33 in February, has been used as one of many sticks to beat him with — intensifying after surprisingly losing his titles against Teofimo Lopez last October.

I wrote a follow-up piece in late January about how the Ukrainian’s mindset had seemingly changed after that decision defeat, shoulder surgery and all, aware that the 135lb landscape was constantly in flux but his goal remained the same: becoming unified lightweight champion.

After stunning the world, Teofimo repeatedly refused to grant Lomachenko a rematch, but the stars were suddenly starting to align once his father Sr hinted at potentially doing so in June.

For what it’s worth, Loma said he’d only rematch Lopez at 135lbs – saying it’s unfair to ask him to again move up in weight, given he began his amateur career at atom and flyweight (102 – 112lbs).

In the months since, he again poured cold water on that speculation while mulling a move up in weight to 140lbs while the Kambosos Jr mandatory defence continued to get rescheduled.

Then, the 24-year-old star was stunned last month by a bullish Australian with plenty to gain and nothing to lose. Kambosos Jr did what he promised he would, and now holds all the cards.

Great boxing display by Loma which puts him in the equation with Haney, Tank & Ryan, even after his LOSS against Teofimo. Respect to Commey, your a warrior and tough as nails. Looking forward to fighting one of these fellow warriors in 2022 downunder 🥊🏟🇦🇺 regards the EMPEROR pic.twitter.com/9PvHuz3Y9n

with a new lightweight king, Australia is the buzzword 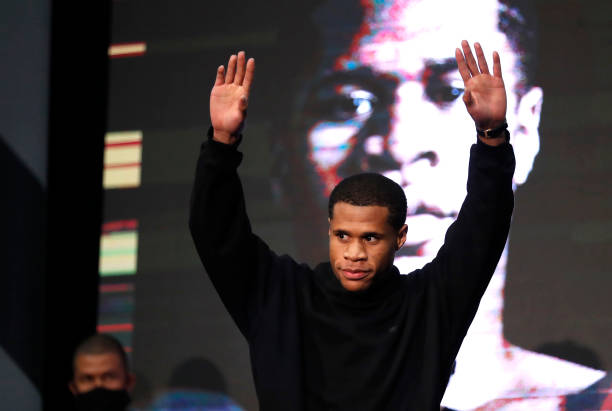 Haney appears the frontrunner for Kambosos Jr next, but Lomachenko isn’t far behind

Devin Haney, Gervonta Davis and Lomachenko have all recorded decision victories against challenging opposition in the weeks since The Emperor won gold on enemy soil, so who’s next?

When asked during his ringside interview, Loma didn’t mince words. Kambosos next? “Yes, of course, I need this chance. If God gives me, I’ll take it – will go anywhere I need to, to fight him.”

Top Rank boss Bob Arum, who promotes Lomachenko, told Sky Sports last week that he believes Kambosos-Loma will happen at some stage in 2022 – even if not immediately next.

“Loma is No. 1 with the WBC and WBO, I think it will happen. He’ll make a voluntary defense then could fight Lomachenko in Australia.

I’ve promoted fights there, it’s a great place – I’m optimistic that, at the end of next year [2022], Loma will be back fighting for titles.”

Haney, the WBC title-holder, exchanged pleasantries with Kambosos after successfully navigating past Jojo Diaz on a night where the Australian was part of DAZN’s commentary team.

He said it was an easy fight for their respective teams to agree terms on, and that he was happy making his first trip to Australia a memorable one with all four lightweight belts to be contested.

During his episode on the Joe Rogan podcast last week, Kambosos Jr reinforced his stance that he didn’t want a tune-up bout for his first title defence at home – wanting to only fight the best.

He said given his ongoing legal troubles, Davis might not be allowed entry into Australia. Davis, who defended his WBA (Regular) lightweight title last Sunday, is set for a jury trial in March next year after being charged with 14 counts related to a a hit-and-run crash on November 5, 2020.

Although Isaac Cruz won fans with his display, Tank was originally supposed to fight Rolando Romero (WBA #1) and revealed he wanted that rescheduled in 2022, but sustained a hand injury which could put him out of the running if George wants a return in the first quarter of next year.

We’ll have to wait and see, but as I said this past summer, the lightweight division continues to hot up with multiple contenders and potential exciting bouts to be made – never a bad thing.