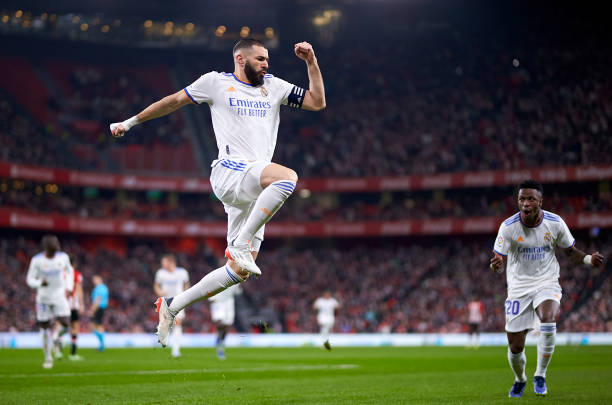 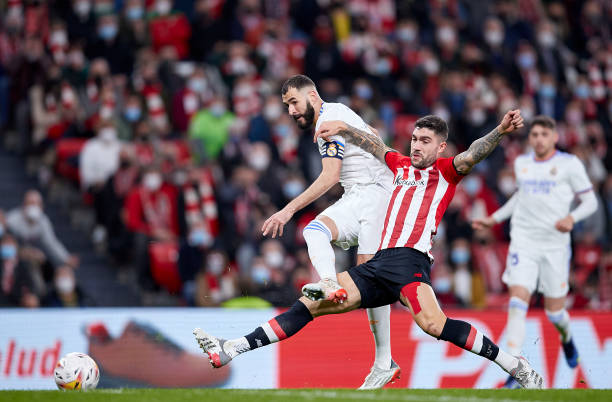 Benzema completes his brace with a razor-sharp finish, after an inadvertent assist by Nunez

For his first, a thunderous curling effort that arrowed into the far corner, Bilbao goalkeeper Julen Agirrezabala’s dive was admirable but futile.

Vinicius Junior, Los Blancos‘ exciting revelation so far this term, got to the byline and fed Toni Kroos on the edge of the box. The German midfield maestro fed a one-touch pass into Benzema’s path, watching him bend it past Oier Zarraga’s best efforts to block without warning.

It was the type of strike that, once hit, was only going in one place. The degree of difficulty though? Very few footballers would be able to replicate that goal. Three minutes later, he sealed his brace before writhing on the turf with teammates concerned at his serious discomfort.

Federico Valverde pinched Mikel Balenziaga’s pocket, advanced forward with Eden Hazard to his left and duly obliged. Hazard – making successive starts for the first time since September – tried to play it back but instead, teed up Benzema with help from an inadvertent Unai Nunez touch.

Benzema fired across goal, again leaving Agirrezabala little chance, but landed awkwardly on his back with Nunez mid-challenge as he struck goalwards. Bilbao boss Marcelino probably couldn’t believe what he was seeing in the home dugout, but there was yet more commotion to come.

Two minutes later, marauding full-back Oscar de Marcos drove forward unchallenged before threading through Oihan Sancet in space and the 21-year-old – who created two assists against Real Betis on Sunday – unleashed a screamer which crashed off the far post to halve the deficit. 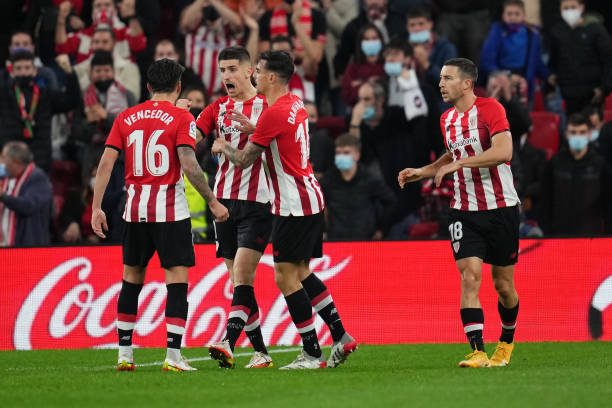 Marcelino motioned for calm from his players, but how could they? The stadium had erupted after Sancet’s first goal since May and more work awaited them. Eduardo Camavinga went close before de Marcos’ key interception thwarted Hazard’s attempted pass for Benzema in the box.

His anticipation and awareness stopped what would’ve been a 25-minute hat-trick, minutes after Nacho repelled his inviting delivery with Inaki Williams lurking dangerously alongside him.

Elsewhere, Nunez missed an opportunity to atone for his earlier error by heading wide from an Iker Muniain corner before Unai Vencedor came close with a snapshot after Bilbao’s build-up play left Valverde all at sea as he unconvincingly tried tracking back.

A sloppy Lucas Vazquez backpass almost gift-wrapped the hosts a Christmas present early in the second-half, but Williams curled the effort a whisker wide of Thibaut Courtois’ near post.

The pattern continued emerging: Bilbao creating promising half-chances but failing to make them count. Raúl Garcia and Nico Williams, Inaki’s 19-year-old brother, only added to that frustration after coming on around the hour mark. 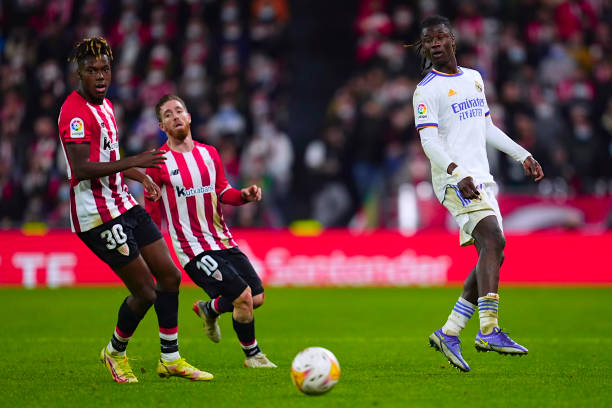 Nico (no. 30) was an impactful sub, but could – and should – have equalised late on

Nico beat his marker to fizz a low cross across the area, which narrowly evaded Inaki – before Agirrezabala produced a game-saving stop to deny Hazard from close-range. Then, the perfect storyline for a late equaliser was written and discarded just as quickly in agonising fashion.

Inaki fed Nico, who should’ve dinked the ball over Courtois to secure his status as super sub with a maiden La Liga goal. Instead, the Spain U21 international toe-poked into the Belgian’s legs, an exclamation mark on a forgettable evening packed with spurned opportunities.

after a brief festive break, what’s next for both sides? 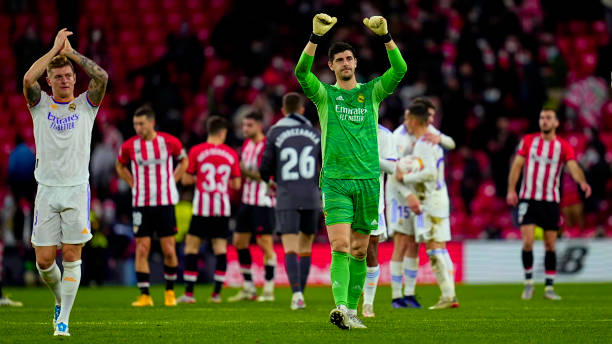 In a ten-day span, Real have four games in three competitions to start 2022:

Bilbao miss the chance to cut the gap on their Europe-chasing rivals, so remain five points below the Europa League places, and a further point behind Rayo who occupy fourth at Christmas.

Marcelino’s men find themselves in a similar situation to kick off the new year but with 24 hours less recovery time with their own four-game stint, having won last season’s Spanish Super Cup.