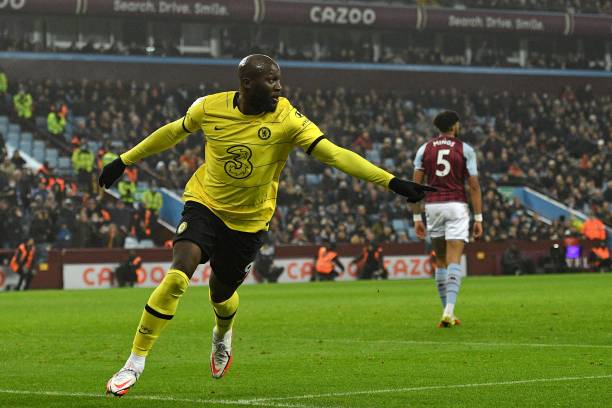 Romelu Lukaku came off the bench to score his first Premier League goal for 107 days, as the Belgium international defiantly dismantled Aston Villa’s backline once again during an eventful second-half ensuring they didn’t lose further ground in their title charge after defending champions Manchester City won a nine-goal thriller against Leicester elsewhere on Boxing Day. 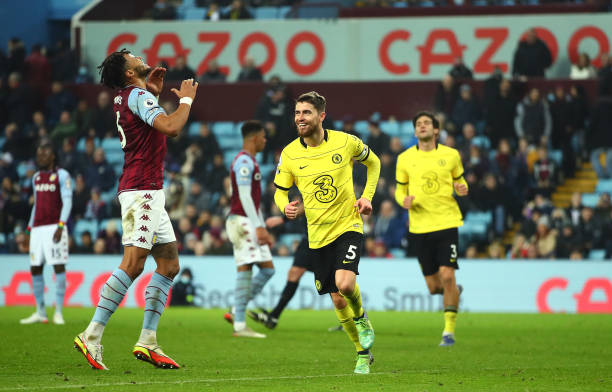 All smiles: Jorginho wheels away to celebrate his second penalty of an action-packed evening

The title might feature the word comfy, but this away trip to the west Midlands was far from one filling Blues boss Thomas Tuchel with confidence pre-match.

His side had spluttered when they should’ve purred, dropping points with league draws against Burnley, Manchester United, Everton and Wolves since early November. They twice led but lost 3-2 away at London rivals West Ham on Dec. 4, with critics quickly questioning their vulnerabilities.

So, after Manchester City’s 6-3 win over Leicester City earlier in the day, the onus was on them to keep pace with the leaders. Fairly early on, you could sense this wouldn’t be a straightforward task. Villa, without manager Steven Gerrard due to a positive COVID-19 test, were dangerous.

That feeling was only exacerbated by Reece James’ freak own goal after 28 minutes, inadvertently heading Matt Target’s cross past Edouard Mendy to gift the hosts a lead to protect. 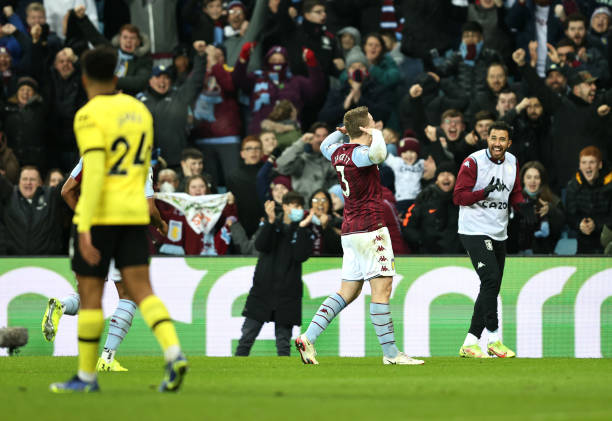 Protect it they did not, as Jorginho slotted home the Blues’ equaliser just six minutes later.

Callum Hudson-Odoi was needlessly brought down by Matty Cash, in one of many self-inflicted wounds Villa gave themselves as the pressure intensified on their shaky defensive unit.

Trevoh Chalobah, who fared relatively well, was sacrificed in a half-time change as Tuchel needed to try something different. Christian Pulisic was isolated and easily repelled in attack by himself, their build-up phases often felt slow and lacked true drive. Right on cue, came Lukaku.

After being sidelined for a full month – nine games across all competitions – with an ankle sprain, then ten more days after contracting COVID-19, Romelu returned here to face a familiar foe.

Having netted eight goals in his last six starts against them, dating back to a successful tenure at Everton, the Belgium international relished the task. Tyrone Mings and Ezri Konsa, not so much.

Thiago Silva, making his 50th start on this occasion, limped off with a hamstring injury just six minutes after the restart and suddenly Tuchel’s tactical tweak opportunities had dwindled.

Thankfully for the visitors, that inflexibility with substitution options didn’t hinder their flow as they continued to press and probe their way forward in search of some much-needed parity.

Hudson-Odoi’s carelessness in possession, losing the ball after an extravagant backpass, had the German incensed on the touchline. 80 seconds after this screengrab below, his side were ahead for the first time: thanks to the winger’s first league assist of the term for Lukaku to head home.

Tuchel in the dugout here, is halfway off the ground as he reacts angrily to Hudson-Odoi losing the ball 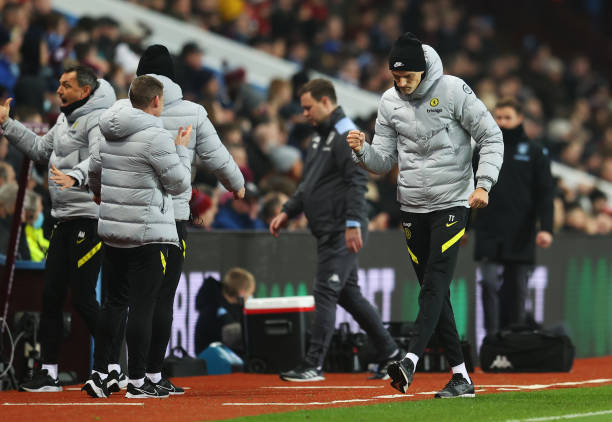 But soon enough, he was celebrating as they took the lead not long afterwards

Even on first view, the goal looked a soft one to concede from Villa’s perspective. Taking the attacking movement aside, Mings – whose body position was all wrong – had been duly punished for being too casual and he had essentially shied away from a proper aerial contest with Lukaku. 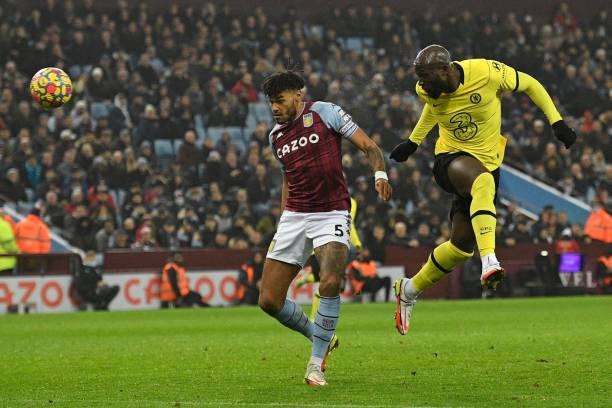 Mings’ body position was all wrong, but even still he should’ve done much better to contest Lukaku

The Belgian couldn’t believe his luck, steering it past Emiliano Martinez from close-range. Mateo Kovacic replaced N’Golo Kante in their third and final change of the evening shortly afterwards, with the Croatian’s tactical awareness among the skills which helped them finally seize control.

That being said, it could and really should’ve been a much healthier winning cushion by the time Lukaku applied an emphatic exclamation mark to his defiant second-half display.

Highly-rated teenage midfielder Carney Chukwuemeka looked lively when he came on, while Jacob Ramsey and Ollie Watkins appeared threatening in transition. Just as the tide seemed like it was shifting in their favour though, Lukaku left a lasting impression worthy of all three points.

Hudson-Odoi’s flick-on, as Chelsea cleared their lines from another wave of Villa pressure, prompted a foot race between Romelu and Targett.

He didn’t just win the race, he left the fullback tumbling down on the turf before baiting Konsa into a last-ditch sliding challenge, which was poorly timed and earned them another penalty.

Jorginho made no mistake once more, clearing any lingering doubt about how this would finish.

With their scheduled away fixture vs. strugglers Leeds postponed due to a rise in COVID-19 cases, mid-table side Aston Villa have now played their final game of 2021. As things stand, Gerrard should return to the touchline for their trip to London – Brentford await on Sunday, January 2.

Chelsea meanwhile, keep the gap between themselves and City to six points. They host Brighton in midweek before a tantalising duel against fellow title challengers Liverpool a week today.