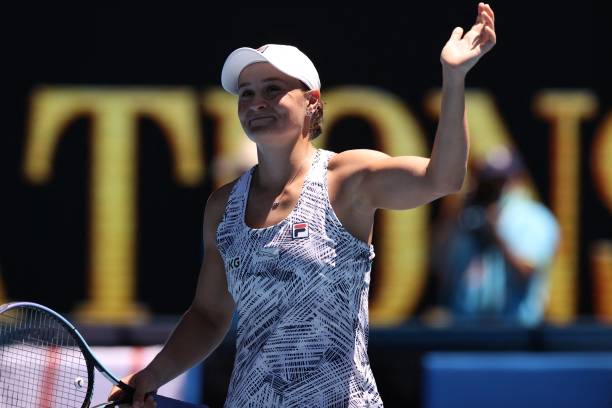 Keys wins the hard way, while Badosa-Kostyuk set for R3 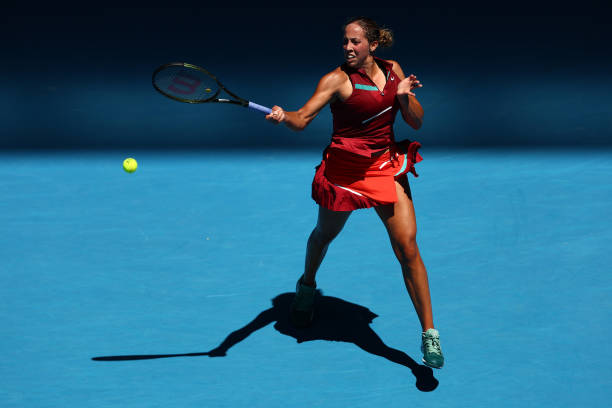 Keys hit 23 winners but will need to be more assertive when ahead, if she’s to make a deep run here

After a fast start where she logged nine winners and had 78% first serve percentage, Keys was seemingly cruising into round three, earning points aplenty on serve and imposing her will against a persistent Cristian display that couldn’t live with the American’s power groundstrokes.

While she failed to take multiple break point opportunities that were available upon occasion early on, the Romanian’s level never really dipped below solid throughout. With that in mind, it wasn’t entirely surprising to see her eventually seize control in a back-and-forth second set.

Keys’ inability to consistently make first serves was slightly concerning though, as you could feel the tide turning and Cristian sensed it too. Rewarded for being more aggressive and drawing errors from the 2017 US Open runner-up, she was two points away from levelling the scores.

Madison spoke post-match about her love for being able to compete, even in tough moments, and that was emphasised in the final few games to close out what could’ve easily turned into a three-set tussle, such was the tense nature of a second set that swung one way, then the next.

In a match with 70 unforced errors combined, Cristian performed admirably but paid the price for failing to snatch set two at the earliest opportunity. Keys broke her in the next game, with a hold to love, before multiple errors helped the 26-year-old roar into another third-round berth. 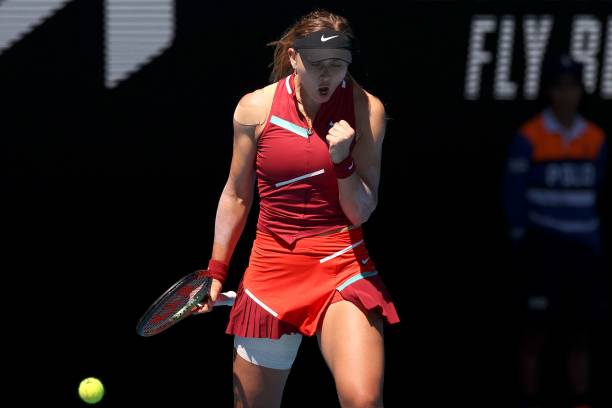 She had five aces and no double-faults, for only the second time already this season, while allowing Trevisan to beat herself (8 winners, 29 unforced errors) without playing her best tennis.

Marta Kostyuk recovered from a double break down in set one (0-3), overwhelm Badosa’s compatriot Sara Sorribes Tormo 7-6, 6-3 in just under two hours elsewhere in the day session.

Friends off-court, those wins mean the pair will face one another competitively for the first time in three years – which was coincidentally here in the final of three qualifying rounds – on Friday.

All about the numbers: Kostyuk logged 33 winners but also 42 unforced errors – 34 in set one alone vs. SST and cannot afford to play that way, to have the best chance of an upset later this week. 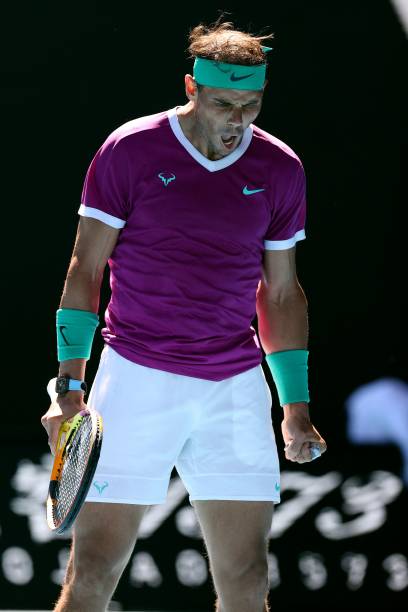 Nadal pumps himself up during a tough duel

It wasn’t as easy as Marcos Giron proved in R1, but Rafael Nadal eventually wore down German qualifier Yannick Hanfmann and won 6-2, 6-3, 6-4 in two hours 42 minutes, punching his ticket into round three – where he will face Olympic silver medallist Karen Khachanov next.

Rafa was emotive, aggressive and knew the task wasn’t going to be an easy one but responded accordingly like the 20-time Major champion he is: firing double-handed backhand winners, drawing errors in longer rallies while frustrating his opponent with fiery forehands galore.

Hanfmann, ranked world no. 126, acquitted himself admirably throughout with a fearless display endearing him to fans on the Rod Laver Arena court.

The 30-year-old should take pride from an effort most struggle to muster against Nadal – getting better as time went on, serving five aces and the same number of winners (30).

“I knew him before, played him at Roland Garros a few years ago [R1, 2019] if I’m not wrong, know he’s dangerous – played great coming from qualies, used to the court, has a big shot and good serve, high potential while the result against Thanasi too … he played a much higher level than his ranking.”

Elsehwere in that section, Hubert Hurkacz [10] suffered a straight-sets defeat by France’s Adrian Mannarino – 6-4, 6-2, 6-3, with the 33-year-old set to play last year’s semi-finalist Aslan Karatsev after the Russian rallied from a set down before beating Mackenzie McDonald. 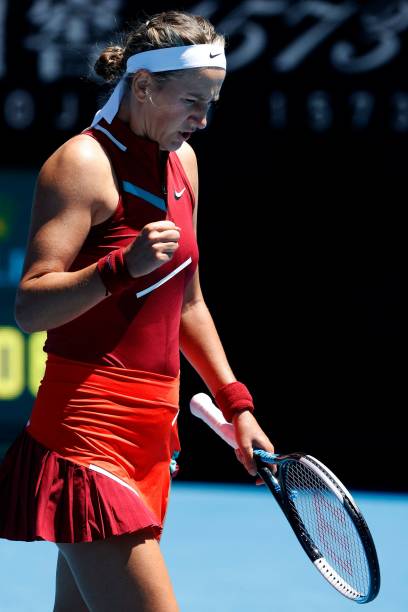 The 32-year-old, whose two Major titles came here in successive seasons (2012, 2013), will hope for another deep run at a tournament she’s only played twice since 2016.

Naturally, the bullish Belarusian will fancy her chances against Elina Svitolina (#15) too in R3 – armed with a 4-0 H2H record and the knowledge the unpredictable Ukrainian struggled vs. Frenchwoman Harmony Tan before the 24-year-old’s unfortunate ending today.

As for other compelling matchups in the women’s draw, it’ll be a clash of French Open champions on Friday when reigning titlist Barbora Krejcikova (#4) faces 2017 winner Jelena Ostapenko (#26) for the third time – with a 1-1 H2H record – after contrasting results earlier today. 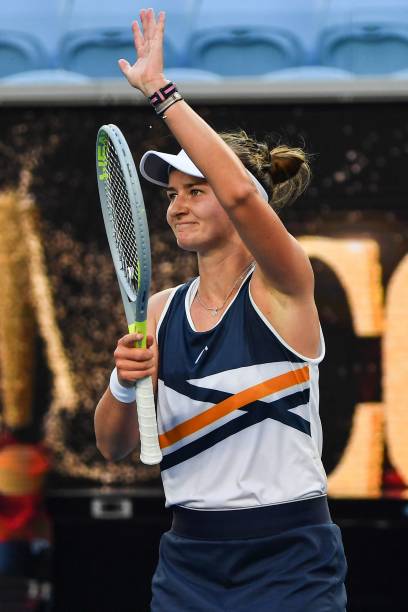 Krejcikova prevailed without much issue against a wasteful Xiyu Wang

It goes without saying, those numbers don’t bode well against players of the Czech’s ever-improving pedigree. Speaking of lopsided match statistics, Ostapenko wasn’t far off either…

Ostapenko, for the second consecutive round, recovered from a set down to eventually oust Adelaide runner-up Alison Riske – 4-6, 6-2, 6-4, where the unpredictable Latvian cleaned up her errors in set two, then went back to erratic ways in a decider with multiple momentum shifts.

Fun is the buzzword for Osaka, as anisimova awaits 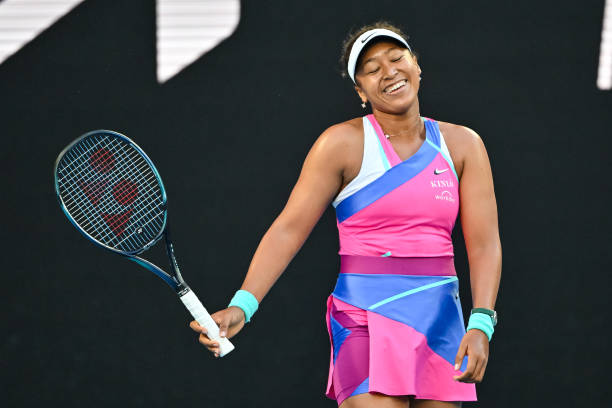 Much like her first-round match against promising Colombian youngster Camila Osorio on Monday, defending champion Naomi Osaka brilliantly breezed through stages of her latest encounter but equally had to navigate some resistance – beating Madison Brengle 6-0, 6-4.

Eight aces and just one double-fault certainly helped her case, compared to four/three in the same category on a sunny afternoon which encouraged Osorio’s aggressive returns.

Despite the Japanese producing just 40% behind her first serve in set one, Brengle didn’t stand a chance until it was too late to muster a true comeback ala Leylah Fernandez last year. Osaka won 12 of 15 points on serve and the 31-year-old quickly found herself down a double break.

Osaka’s lapse came midway through set two, repeatedly fending off break point opportunities (9/10 saved). Had Brengle managed to convert many more, perhaps this would’ve been a different story. Tennis is all about momentum in moments and she again held firm under duress. 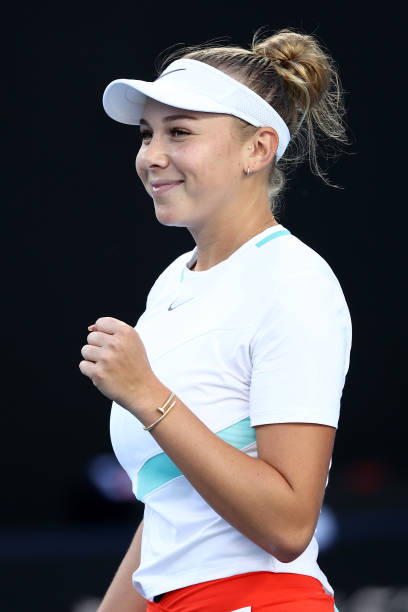 It wasn’t though, so now Naomi prepares to face Belinda Bencic‘s conqueror – another fearless 20-year-old in Brengle’s compatriot Amanda Anisimova.

A Roland Garros semi-finalist in 2019, she’s struggled for consistency since – but won Melbourne 2 on Jan. 9 and is in good form.

“I returned pretty well, been really working on it over the offseason. Also trying not to [rate my performance levels], if I compare myself to the past I won’t ever be satisfied, take it one day at a time [cheers].”

I know she has a really good return, great backhand, we’re both gonna take our chances, it’ll be really exciting – very interesting to play the younger players because I used to be like that, having nothing to lose.”

US Open semi-finalist Maria Sakkari (#5) was pushed rather uncomfortably towards the end, but eventually beat Chinese qualifier Zheng Qinwen 6-1, 6-4 with her Greek fan club in full voice.

That result sets up a third H2H meeting with Russia’s Veronika Kudermetova (#28) – who hasn’t surpassed round three at any Grand Slam tournament in 11 previous main draw entries. Will that become an unwanted dozen, or does the 24-year-old have a few tricks up her sleeve on Friday? 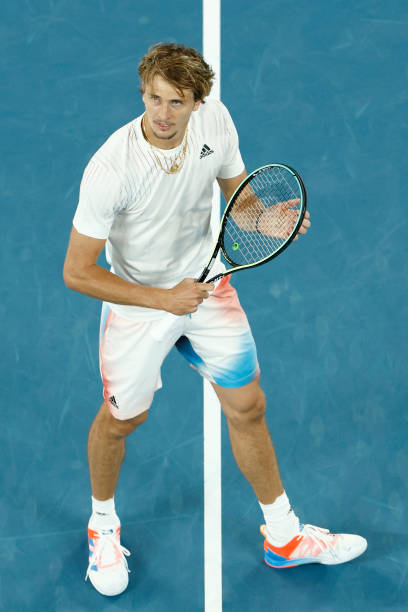 Zverev acknowledges the rowdy crowd after his latest win

He was distracted, frustrated but even a few serving yips weren’t enough as Alexander Zverev set his fate with Moldova’s Radu Albot in R3 after the Olympic champion played spoiler against home hope John Millman in a one-sided night session match the partisan crowd didn’t enjoy.

“I could feel you guys have been locked up for two years, amazing atmosphere, hopefully it’ll get even louder for the next few matches.

I’m prepared that everyone will hate me after the match, it’s quite accurate, that’s my mindset, hopefully I’ll get a lot of boos.

Sports needs atmosphere, the people, whether you’re for or against me, I enjoy it… incredible we’re going back to normal.”

Zverev and Albot’s first and only previous H2H meeting? R1 back at Flushing Meadows three years ago, where the 32-year-old recovered from two sets down to force a decider – but the big-serving German eventually came through winning to kick off his US Open 6-1, 6-3, 3-6, 4-6, 6-2.

Speaking of five-set thrillers, Denis Shapovalov (#14) and rising American star Sebastian Korda were both involved in them today and lived to fight another day in tricky R3 matchups.

Korda was twice a set down, but rallied to beat France’s charismatic Corentin Moutet 3-6, 6-4, 6-7, 7-5, 7-6 and will play Pablo Carreno Busta (#19) in round three after the Olympic bronze medallist was pushed into a five-set clash with Dutchman Tallon Griekspoor. 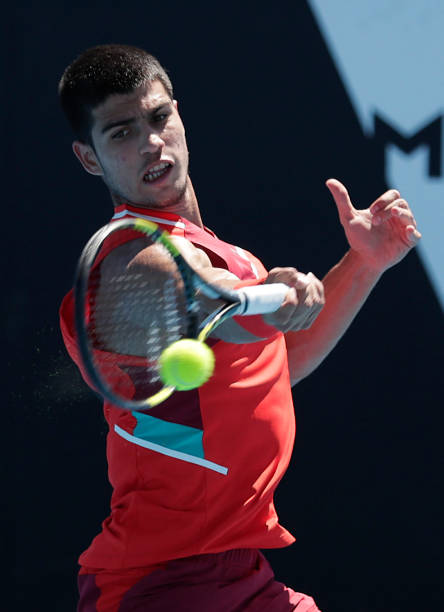 Can Carlitos stun another top-10 player?