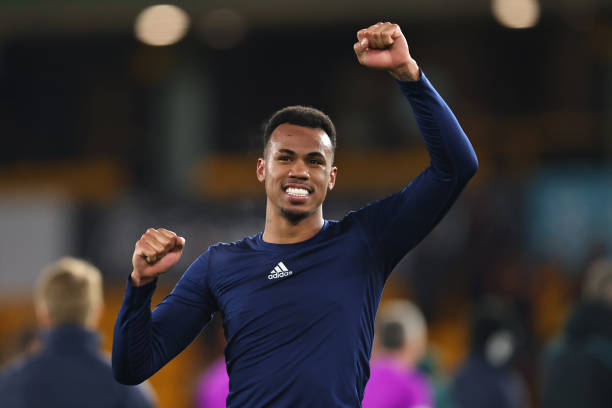 The 24-year-old produced his best individual display of the season and needed to, in helping ten-man Arsenal squeeze past an increasingly frustrated Wolves showing. But while Mikel Arteta’s men revelled at full-time after ending a five-game winless run, this determined away display just reiterated how unpredictable they have proven under the Spaniard’s guidance.

Gunners earn smash-and-grab result, no thanks to martinelli 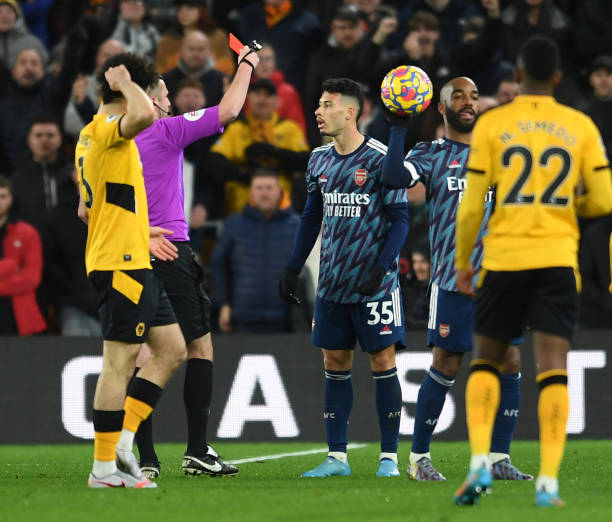 It wasn’t pretty and some away fans had their hands clasped together in prayer but now, Arsenal are again within touching distance of the promised land: England’s Champions League places.

They needed some inspired performances from goalkeeper Aaron Ramsdale, Gabriel, his centre-back partner Ben White and second-half substitute Rob Holding to do it, having been increasingly under duress in a frenetic period threatening to explode on numerous occasions.

None more so than when Gabriel Martinelli got needlessly sent off for two bookable offences in the same phase of play, before Granit Xhaka inadvertently slid the ball into his own net from Wolves’ resulting free-kick. Thankfully for the Swiss international, the linesman’s flag was up.

Bruno Lage’s men huffed and puffed their way over the finish line, but lacked the finesse and composure to take advantage of a dominant last half-hour. Holding came on and made 11 defensive interventions in 20 minutes plus stoppages – including a game-high nine clearances.

Xhaka and holding midfield partner Thomas Partey were both limited in what they could commit to in terms of defensive challenges after picking up first-half bookings. So naturally, their younger teammates – right-back Cedric the exception – dug in well to weather Wolves’ storm. 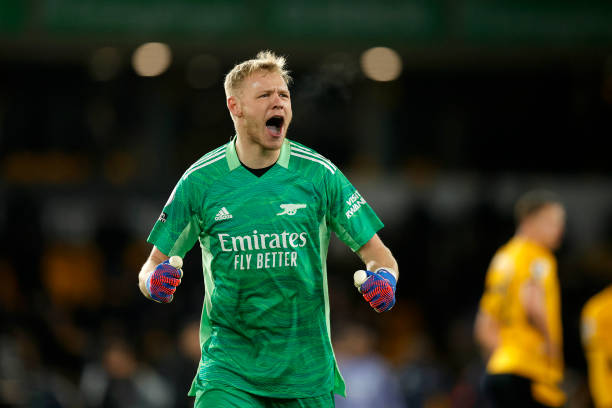 Yet again, it’s a case of if only they could channel that same energy more consistently.

With two games in hand on West Ham and European champions Chelsea, while rivals Manchester United and Tottenham both dropped points midweek, Mikel Arteta’s men can see light at the end of a tunnel which didn’t seem clear after a rough start to the league campaign.

After conceding nine goals in their opening three league games against Brentford, Chelsea and Manchester City in the month of August, questions aplenty were asked of Arsenal and whether Arteta – like Unai Emery before him – was truly the right man equipped to lead their rebuild.

They didn’t hesitate by backing him financially in the transfer market, focusing on youth and being unafraid to spend some rather audacious fees for relatively untested players. The way they were playing though, the question soon became should and would he be sacked by Christmas?

Instead, they’ve reportedly set up performance-based targets to discuss a contract extension for the Spaniard, who spent five years in north London as a player and turns 40 next month.

It’s easy to forget this is his first job in management, having learned plenty as an assistant coach with Pep Guardiola at Manchester City. At this age, newly-appointed Everton boss Frank Lampard was still getting his feet wet in Derbyshire with Championship club Derby County.

Cliche perhaps but true all the same: everyone’s path is different. Arteta, while not universally loved, has substantial support and goodwill in the bank after their FA Cup triumph in 2020.

The way he’s dealt with some more expressive characters hasn’t always worked in his or the club’s favour. But it’s about setting standards and sticking to them, not bending to player power. 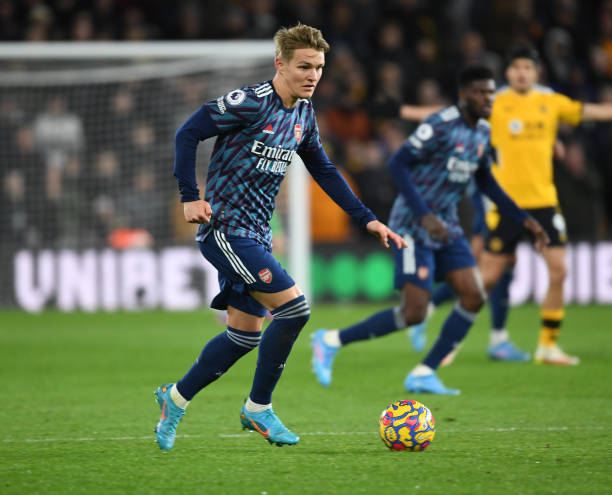 It feels typical of this point that the man who propelled them to those heights is now trying to help reshape a newlook Barcelona team after abruptly departing on deadline day last month.

But sometimes a clean break is needed for both parties. Not every situation can be treated the same, ala Xhaka and the restoration work he did to somehow prolong his stay at Arsenal.

After watching most of their top-four rivals in action at the weekend, they’ll take some solace from the results – even if they themselves should’ve been hosting Leicester on Sunday.

Instead it was Nottingham Forest, who cruised to a 4-1 win in another FA Cup round packed with surprises. United beaten on penalties by Middlesbrough, Chelsea and West Ham taken to the brink by Plymouth and Kidderminster Harriers, Bournemouth toppled by Boreham Wood.

All of that is to say, in essence, Arsenal have even less fixtures – and commitments – to worry about, in a rare campaign without European football and increasingly small squad depth too.

Six first-team players left, three on-loan and three permanently, during a frustrating January transfer window. However if the Gunners are to return back to what they so desperately crave, they must produce more defiant displays like these as the months ahead promise to be intense.

Whether this was a one-off, or sign of things to come, remains to be seen.