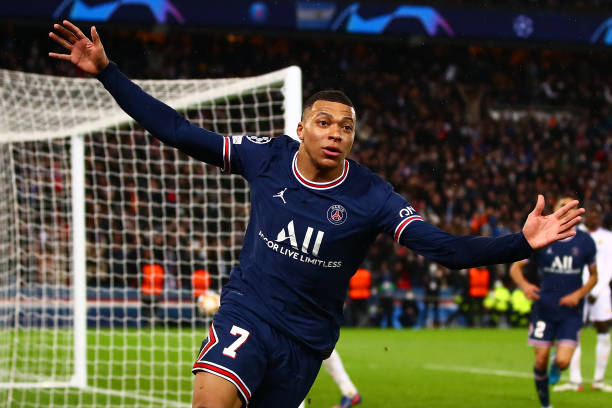 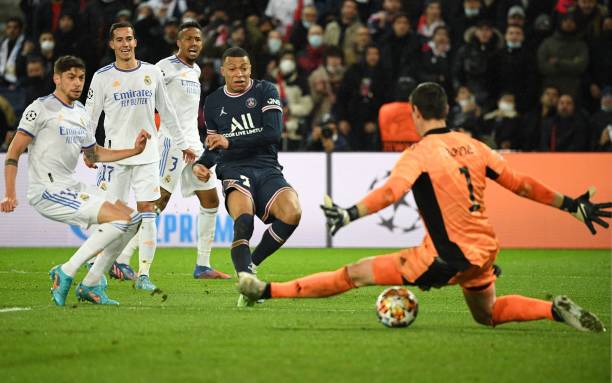 Mbappe left Vazquez, Militao and Valverde in his rearview (all three in white) before beating Courtois

Spare a moment for Thibaut Courtois. If not for his inspired efforts, PSG players would’ve probably been content passing sideways and backwards with monotous regularity late on.

One final half-chance away from keeping his fourth consecutive clean sheet, 17th of the campaign for club and country, then he watches helplessly as the Real defence is shredded and before he can adjust accordingly, the ball is slotted through his legs and into the bottom corner.

Mbappe, who did similar against Stade Rennais on Friday, took charge as he often has felt compelled to do in recent seasons. Unlike other situations, guilty of doing too much, he waited for the right moment to pounce and the rest will be dissected in the hours and days to come.

It’ll go down as a Neymar assist, on off the bench, but this goal was all of Kylian’s doing. The camera panned to Mbappe’s national strike partner Karim Benzema, he knew all too well.

“It could only be him, twice in four days, 93rd minute to win it, it had to be him… it may only be the first leg but he deserves it, [the goal] made me scream and rightly so.” – Arsenal and France legend Thierry Henry on CBS Sports

Half-an-hour earlier, Courtois was mobbed by his teammates after stretching low to his left and thwarting a Messi penalty – the Argentine’s 30th miss of his career at a decisive point in the game.

Messi’s missed penalty will naturally snatch headlines as his magical powers continue to wane but not for want of trying. He continued dropping deeper to retrieve possession and still created chances from tight spaces, with only Marco Verratti (6) producing more than his four key passes. 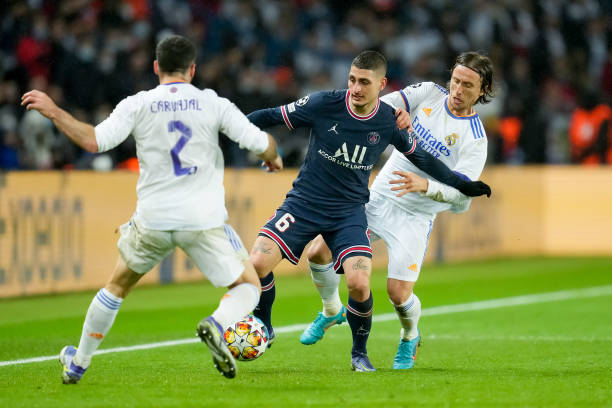 Mbappe saw a snapshot flash narrowly wide of the far post in the second-half, having tested Courtois from close-range in the first. PSG’s sustained spells retaining the ball, even while well defended by a disciplined Real Madrid shape, meant this didn’t feel like it would finish goalless.

Dani Carvajal, who wasn’t adequately protected and ultimately gave away the penalty for a mistimed challenge on Mbappe, was gracefully replaced with 20 minutes to go. On came Lucas Vazquez in his place at right-back but, spoiler alert: the winger-turned-wingback didn’t do better.

Carlo Ancelotti’s other selection gambles didn’t pay off either.

Ferland Mendy and Benzema, both who hadn’t played since January 23 with separate hamstring injuries, were unsurprisingly off-the-pace. The former was booked for a sloppy tackle on Danilo Pereira ten minutes into the second-half and as such, will miss the return leg.

Captain Benzema led the line with Vinicius Junior and Marco Asensio either side of him but barely touched the ball in effective areas, such was PSG’s dominance of possession. Asensio was anonymous while Achraf Hakimi happily kept Vinicius quiet before his departure late on.

Perhaps by design based on the responsibility he has, Casemiro’s defensive contributions often feel overblown – but the Brazilian made his presence felt from minute one. He, just like Mendy, will miss the second leg though after committing a reckless first-half foul on Leandro Paredes. 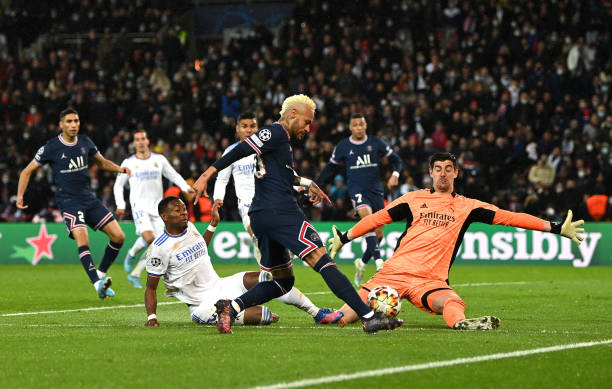 Neymar’s return was fleeting, Casemiro and Mendy are now both suspended, can Real recover?

Peter Drury described this as a game fit for the Final on commentary and while an intriguing matchup, that sentiment feels a few years overdue. Both teams’ strengths and weaknesses had been outlined pre-match and this affair felt more about storylines than those actually playing.

Mbappe’s future remains unclear, despite speculation to the contrary claiming a Real summer move is already done. You just knew he’d be up for this game, and it showed from the first kick.

After one too many electrifying surges forward went unrewarded, the 23-year-old opted to go solo and jinked past fatiguing Real Madrid defenders as if they weren’t there en route goalwards.

Neymar, the third in PSG’s latest attacking trident, could only muster a 20-minute cameo after recently recovering from an ankle injury which saw him miss the bulk of their winter schedule.

After starting this month with a late 1-0 Copa del Rey quarter-final defeat by Athletic Bilbao, then dropping points away to Villarreal on Saturday, Ancelotti’s men need a hard reset after the former PSG boss’ tactics here – while understandable given the task – ultimately backfired.

They’ll be without two key players next month, meaning Marcelo and Federico Valverde or summer signing Eduardo Camavinga will likely come into the fold. Will that be enough?

Now, Real will have to lick their wounds quickly and adopt a completely different gameplan when Mauricio Pochettino and co come to the Bernabeú on March 9. Otherwise, they’ll be faced with the uncomfortable reality: elimination at the last-16 stage for the third time in four seasons.