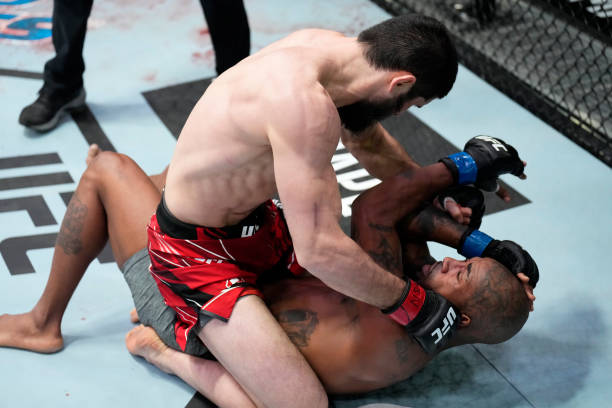 Makhachev Mania, Michael Chiesa called it last summer. But now, Khabib Nurmagomedov’s protege Islam has put together successive first-round finishes for the second time in his seven-year UFC career after swarming short-notice replacement Bobby Green to devastating effect. As such, it seems only a matter of time before the 30-year-old will fight for UFC gold at 155lbs. 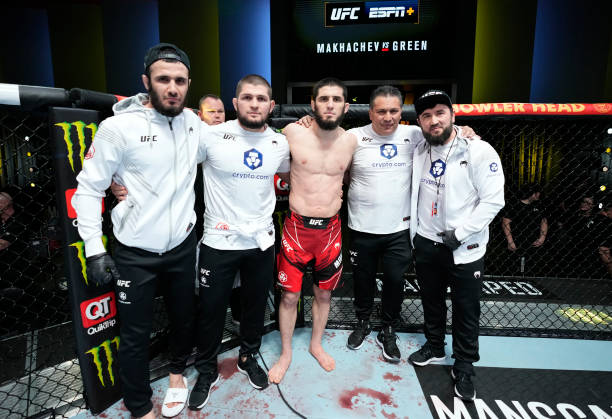 After leaving Green in a heap on the floor, trying to defend himself from bottom position, Islam Makhachev is now on a 10-fight winning streak – tied with two UFC champions for the second-longest active run behind another titlist in reigning welterweight king Kamaru Usman (15).

Volkanovski has hinted at going up in weight, but unfinished business still awaits him at 145lbs where the Max Holloway trilogy feels inevitable considering their previous two fights.

As for Oliveira, he was expected to bow down and put up a spirited display but ultimately lose against uncrowned champion Dustin Poirier in December. Instead, he again weathered the frenzied storm and came out stronger on the other side with a third-round submission win.

He’s now set to face former interim champion Justin Gaethje (#1) at UFC 274 in May, a fierce second title defence but one many expect will result in fireworks given their respective skillsets.

Considering Khabib Nurmagomedov’s own history with Gaethje – submitting him in what proved his final professional fight – it makes sense he’d prefer a different path for his protege.

“If I say I think Gaethje is going to win, maybe people think because I fight with him, that’s why. For UFC, it’s going to be better if Charles wins – 11-win streak vs. 10-win streak, two new blood for the lightweight division.”

With a return to Abu Dhabi slated for this fall, Makhachev is expected to face the Oliveira-Gaethje winner and get his long-awaited wish – provided the winner emerges relatively unscathed.

While injuries can never have good timing, #3 ranked contender Beneil Dariush (broken fibula) will be cursing his lack of luck as he assesses recovery options and watches from the sidelines.

Cast your mind back to my preview piece on Wednesday and you’ll know this result means Makhachev has entered rarefied air as far as Green’s resume is concerned: only he and the aforementioned Poirier have notched first-round stoppage wins in the UFC over the 35-year-old.

Although a short-notice replacement with low expectations, Green spoke on social media about feeling ‘expensive pain’, enduring a quick night’s work in an underwhelming first main event spot. He’ll lick his wounds and should return stronger for the experience, regardless.

Armenia’s promising lightweight contender Arman Tsarukyan, who won Fight of the Night honours and certainly played his part in a competitive UFC debut decision defeat against Makhachev back in Apr. 2019, revealed earlier this past week he was offered a rematch. 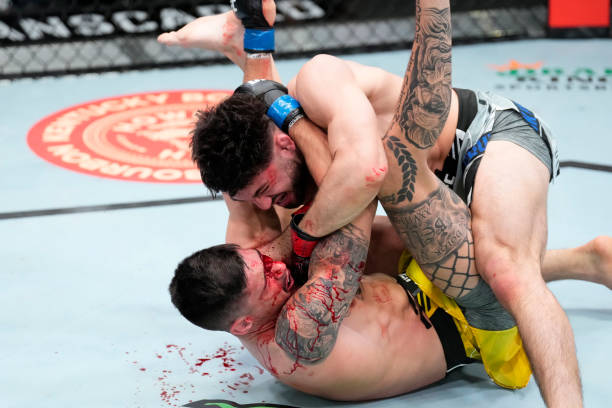 Instead, the 25-year-old – ranked #12 at 155lbs – produced a vicious second-round finish against Spanish prospect Joel Alvarez elsewhere on the main card here, before making his intentions clear as far as rising up the rankings is concerned: calling out Gregor Gillespie (#9). 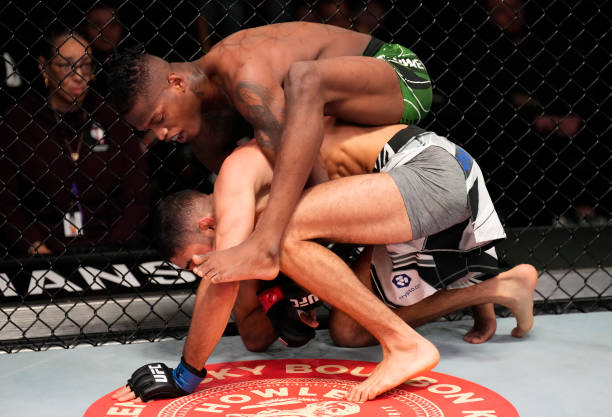 Don’t get paid for overtime: McKinney had another R1 finish after his memorable debut last summer

On the same night where Josh Taylor was comprehensively outstruck and still managed to retain his light-welterweight titles in boxing, Priscila Cachoeira absorbed damage aplenty through a Fight of the Night clash with Ji Yeon Kim – yet somehow won via UD (29-28 x 3).

Despite having two opponents cancel on this very date, one with a torn MCL and another for a USADA incident, it didn’t deter women’s featherweight Josiane Nunes from producing her second straight win – beating Ramona Pascual via UD (30-27 x 2, 30-26).

Terrance McKinney had an unforgettable debut at UFC 263, blasting Matt Frevola to bits in just seven seconds, and again raced to finish Fares Ziam during their rescheduled matchup – this time with a rear-naked choke submission.

Speaking of rear-naked chokes, welterweight Ramiz Brahimaj did the same against Micheal Gillmore with a similarly quick submission (R1, 2:02).

Up next: UFC 272 on March 5 — headlined by a welterweight clash between close friends turned foes in former title challengers Colby Covington (#1) and Jorge Masvidal (#6).