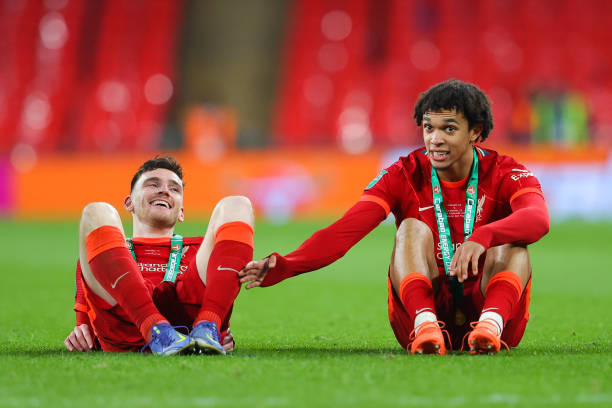 After riding their luck at times against another wasteful Chelsea showing, Liverpool emerged victorious in yesterday’s action-packed Carabao Cup Final – winning 11-10 on penalties. However, it was again the individual displays of Jurgen Klopp’s formidable fullback pairing which stand them in good stead for the rest of the season with more silverware up for grabs. 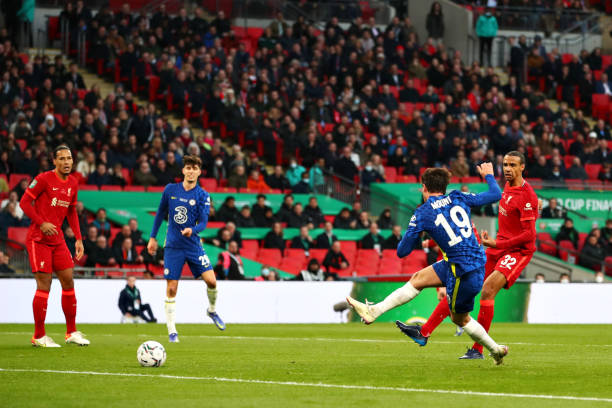 Mount had multiple opportunities to break the deadlock, but fluffed his lines and lacked composure

Liverpool. Champions League winners in 2019-20, domestic champions the next campaign, yet the Reds haven’t graced the Wembley turf often for Cup finals in recent history. This past weekend was their first visit there since edging past Cardiff, also on penalties, ten years ago.

They gritted their way to a ninth League Cup triumph on Sunday evening against Thomas Tuchel’s Chelsea, who will undoubtedly feel aggrieved having failed to win more silverware.

The Blues could’ve wrapped the tie up in 90 minutes, without the inconvenience of extra time, but for some lacklustre finishing from Mason Mount and Christian Pulisic among others. It feels like the same old story, one way or another, yet it’s one that hasn’t yet been properly rectified.

The latter’s defence-splitting pass to the former, which cannoned back off the far post just minutes into the second-half, felt like a sign. Perhaps it wasn’t to be their day after all – even with some cruel irony in the fact their £97.5m striker, Romelu Lukaku, watched on from the bench.

Lukaku, who started well but has since endured a rough few months on his return to west London, scored decisive goals against Al-Hilal and Palmeiras to help them clinch the Club World Cup earlier this month, but was ridiculed for a quiet showing vs. Crystal Palace seven days later.

Coming off the bench to make an impact again on this occasion, the Belgium international had a thunderous extra-time finish disallowed for being marginally offside after VAR review – though it wasn’t exactly clear which body part was in an offside position before he received the pass. 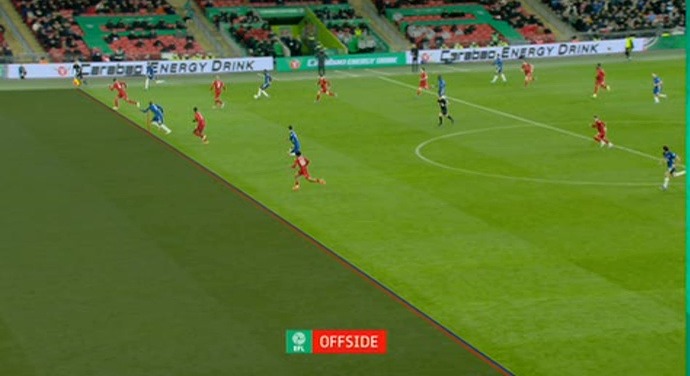 Lukaku’s left arm is adjudged to have been in an offside position, ahead of last defender van Dijk

As such, that incident as well as Naby Keita’s high challenge on Trevoh Chalobah that went unpunished, further reinforced the beliefs of some who feel the FA maintains a long-standing agenda against them favouring their opposition in big matches, dating back multiple years.

Ultimately though, whoever lost this back-and-forth encounter would’ve felt hard done by.

Liverpool fashioned promising opportunities themselves and were unlucky too, Joel Matip thought he had won the game with a second-half bullet header but VAR review saw it cruelly – but correctly – ruled out after van Dijk’s aggressive interference on Reece James in the build-up.

Beforehand, the world champions had their goalkeeper to thank it was still goalless. Edouard Mendy’s double save to deny Keita and then his fellow AFCON winner Sadio Mane from close-range spoke volumes for the confidence he exudes at Chelsea – even with shaky distribution.

Thiago Silva bailed him out shortly after the hour mark with a goal-saving clearance off the line after a dodgy kick was quickly intercepted, while most of the post-match debate centred around a decision which felt ill-timed in hindsight but understandable given the circumstances.

Tuchel opting to bring on second-choice ‘keeper Kepa Arrizabalaga, a penalty-saving specialist, solely for the shootout backfired, as the Spaniard saved none then blasted his own effort high and over the crossbar to send Liverpool into jubilant celebration. You can’t get them all right.

Reds roll with the punches and look intent for more 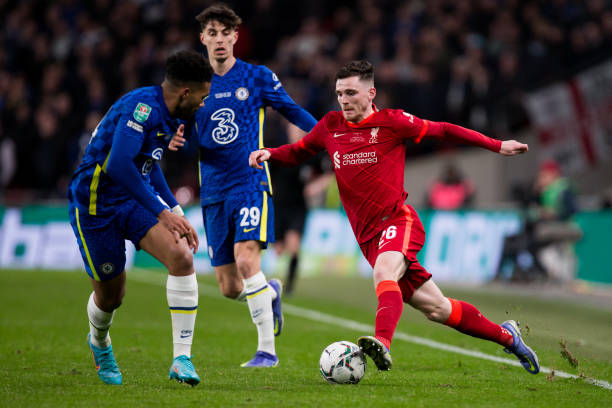 Robertson weaves his way past Havertz and James in tight space

But while Chelsea rue their lack of luck and some indecisive finishing, Liverpool can wax lyrical about their collective camaraderie and the long-term future of Luis Diaz, settling quickly and again proved a livewire on what was his fourth start since a £38m move from Porto last month.

It certainly helps the integration process when you have Andy Robertson and Trent Alexander-Arnold, who aren’t without their individual weaknesses but play in such a way outweighing potential deficiencies with excellent passing and spatial awareness, among other strengths.

It’ll be interesting to see if and how their midfield manages to hold up under duress from Europe’s elite, though the duo’s creative work is something most title-challenging teams crave.

Sadio Mane’s form has trended upward since their frenetic 2-2 draw away at Chelsea on Jan. 2, coinciding with Senegal calling him up for AFCON duty. Mohamed Salah, whose future at the club remains uncertain, has continued leading the line with distinction despite speculation.

Between them, Diogo Jota and an increasingly unpredictable Roberto Firmino, Liverpool boast quality attacking options to rival any teams. Divock Origi appears content with a bit-part role, as does Takumi Minamino, and it’s likely both will depart for pastures new this summer.

However, if they are to use this Carabao Cup success as a springboard for more trophies this term, it goes without saying they need more ruthlessness in the final third.

Armed with a comfortable but not unassailable 2-0 aggregate advantage against Inter in the Champions League, they should fancy their chances against any of Europe’s elite. After all, who would’ve predicted Chelsea would win it all after Tuchel’s arrival five months earlier?