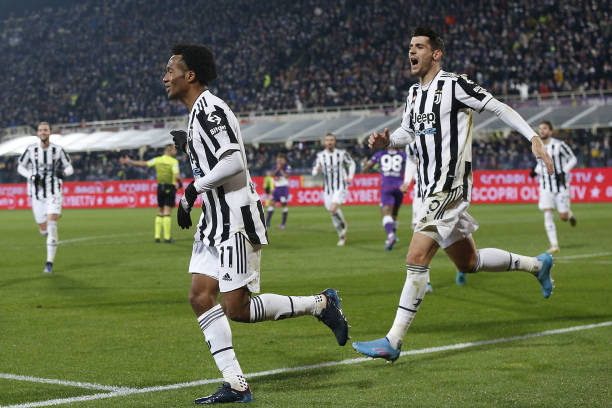 Under the backdrop of Dusan Vlahovic’s return to Florence, 35 days on from completing his €70m deal, Juventus are now unbeaten in ten across all competitions. They happily snatched a last-gasp advantage in their Coppa Italia semi-final against Fiorentina as substitute Lorenzo Venuti inadvertently turned Juan Cuadrado’s cross into his own net deep into stoppage-time. 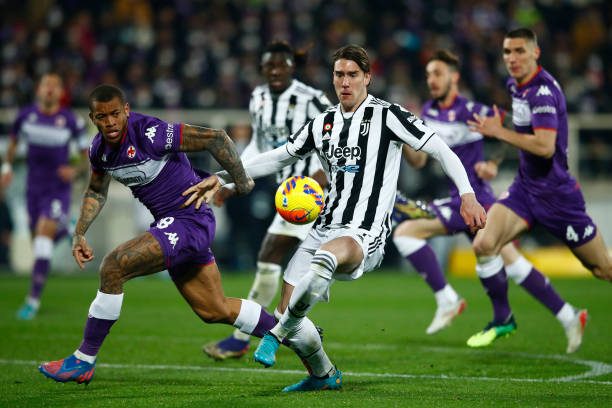 Following three successive 1-1 draws across all competitions, Juventus were 3-2 winners away at Empoli last week with their new star striker Vlahovic netting a matchwinning brace.

After an alarming start to the domestic campaign, losing as many as they won (4) in their first 11 games, head coach Massimiliano Allegri has established a sense of stability in Turin once more.

This was far from a memorable performance, but so long as they held firm defensively and kept their hosts’ big chances to a minimum, there was always a chance this result would materalise.

Ruan’s 88th-minute own goal proved their winner against Sassuolo in this competition’s quarter-finals last month and three days later, Danilo scored a bullet header – his first goal in over a year – in stoppage-time to ensure a share of the spoils away against fifth-placed Atalanta in Serie A.

Consider this. Allegri has to juggle a busy schedule on all fronts with a considerably depleted squad to choose from: Paulo Dybala (thigh), Federico Chiesa (ACL) and Federico Bernardeschi (muscle) are just three creative players currently sidelined with their respective injuries.

Unsurprisingly, given the latter two were also acquisitions from Fiorentina in recent seasons, Vlahovic received a frosty reception from his former supporters and was the centre of attention.

He would’ve expected that, but perhaps not to be effectively marshalled out of this encounter as well as he was by Nikola Milenkovic whenever his centre-back partner Igor Júlio looked shaky. 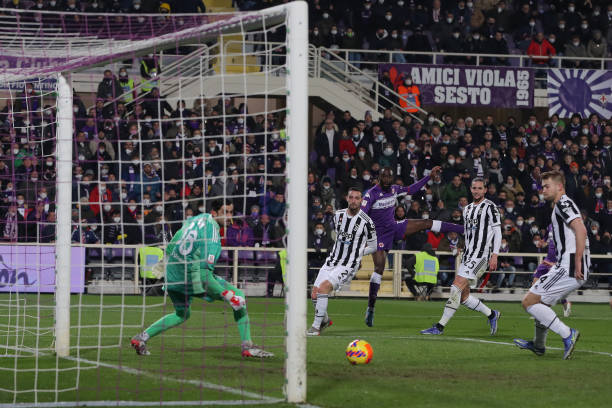 Ikone was a nuisance for Juventus’ defence and on another day, could’ve had a brace

Cup goalkeeper Mattia Perin made six saves and was one of Juventus’ best players, but had some poor finishing and the woodwork to thank in keeping his third clean sheet of the season.

Giacomo Bonaventura lacked composure, blazing over the bar with the goal gaping at his mercy after the Italian’s slack forward pass fell straight to the midfield’s feet on the edge of the box.

If that was a let-off for the visitors, then Fiorentina’s winter signing Jonathan Ikone should’ve broken the deadlock briefly after the restart. He skipped past fullback Luca Pellegrini to the ball, evaded Mattia de Sciglio’s interception and curled towards the far post.

Frustratingly though, the Frenchman’s wait for a first Fiorentina goal continues. He combined well with Bonaventura to create a half-chance down the byline in the first-half, before coming close with a solo effort ten minutes later which left Perin rooted to the spot but trickled just wide.

Arsenal loanee midfielder Lucas Torreira, Gaetano Castrovilli and captain Cristiano Biraghi all had shots on goal but La Viola had nothing to show for their pressure as time ticked by. As such, you sensed Vincenzo Italiano’s men could live to rue those missed opportunities. So it proved.

Juan Cuadrado, a half-time substitute for an ineffective Marley Ake, was considerably more involved than the former Marseille youngster. Álvaro Morata replaced Moise Kean, a frustrated figure in attack and like Vlahovic, was similarly starved of quality service in the final third.

But just as quickly as Fiorentina flew players forward in search of a late winner, they were stunned into a smash-and-grab defeat from a cup tie they did enough to win comfortably.

Cuadrado combined with Adrien Rabiot before whipping in a dangerous cross, one which goalkeeper Pietro Terracciano misjudged and missed as he attempted to punch clear.

Venuti, a half-time substitute for injured Real Madrid loanee Alvaro Odriozola, couldn’t adjust his body position in time to avoid taking a big touch goalwards, inadvertently hitting it towards his own net. Despite a sliding clearance to try and save their blushes, it was too late. 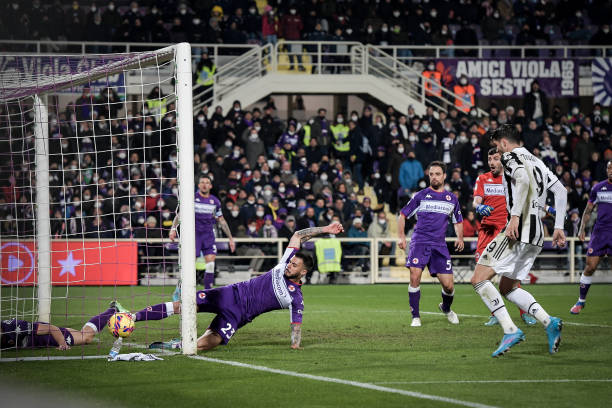 Cuadrado’s cross was turned in by fellow second-half sub Venuti, who couldn’t adjust his body in time

Heartbreak for the hosts, Juventus go into the second leg on April 20 with an away goal and cruelly punished their hosts for failing to take their chances. A bitter finish indeed, Venuti was in tears at the full-time whistle and many players – Vlahovic included – went over to console him.

Having lost successive games for the first time since mid-October, they’ll have to channel that frustration into a purposeful showing at home to Hellas Verona on Sunday afternoon if they’re serious about their European ambitions after rivals Roma and Lazio have dropped points of late. 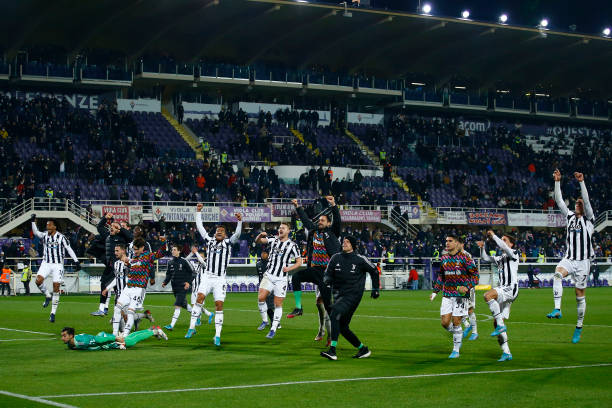 Despite their aforementioned struggles earlier in the season, Juventus are only seven points adrift of joint-leaders Napoli and Milan with 11 league games still to play. Meanwhile, they host Villarreal in their Champions League last-16 clash on March 16 – a luxury neither team can boast.

The hierarchy will stress they are just keen on cementing a top-four finish, going as far as they can on three fronts after losing the Supercoppa Final in extra-time against Inter on January 12.

However, earning results like these when they’re not playing well, with key players still to return, will mean fans’ expectations rise as they long for a strong finish to an eventful campaign.

As for Fiorentina, there’s no reason why they can’t secure a top-six domestic finish for the first time since 2015-16 even without Vlahovic – 17 league goals in 21 games before his big move.

However, they need to be more clinical and will look to Hertha Berlin loanee Krzysztof Piatek in that regard, with Nicolas Gonzalez and Ikone both expensive creators who need to step-up.