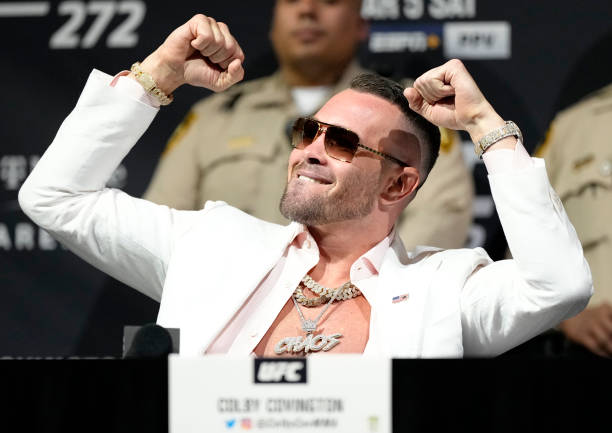 Chimaev? Earn your way up, I’ll kick you right back down 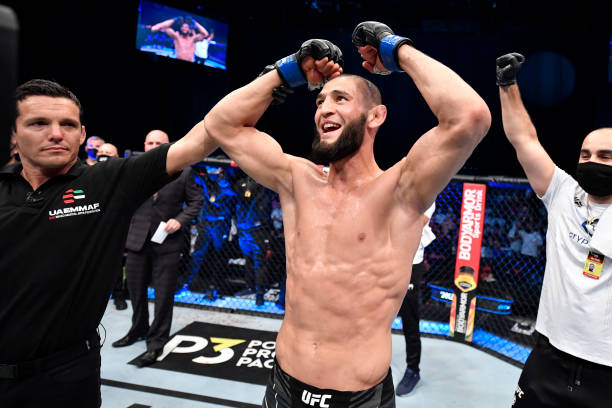 Chimaev celebrates after his standout showing against Li Jingliang on Oct. 30 in Abu Dhabi last year

Although verbal jabs aplenty have been exchanged between Covington and Masvidal before this weekend’s big PPV event, Chaos has revealed he is willing to fight the division’s highly-anticipated contender Khamzat Chimaev in future, but on the condition he proves himself.

During an interview with BT Sport, Covington was asked about Chimaev but dismissed Borz‘s accomplishments and again coined a phrase poking fun at the Russian-born Swede’s first name.

“Earn your way up and no problem – I’ll kick you right back down, I love destroying hype trains, going to destroy one this weekend in Masvidal. He’s never going to be the same ever again, no-one is going to care about his fights.

Chimaev wants to make noise across two divisions and as such, has called out both champions at 170 and 185lbs – Kamaru Usman and Israel Adesanya – among other fighters in recent months.

Having begun his UFC career with four stoppage victories, including three straight in the first-round, the explosive 27-year-old is understandably being fast-tracked given his star potential and finds himself slated to face former title challenger Gilbert Burns at UFC 273 on April 9.

The critics will justifiably say Chimaev hasn’t truly been tested yet and the 35-year-old Brazilian, who has world-class grappling pedigree with the striking to match, is a worthwhile litmus test.

Although currently recovering from hand surgery, Usman’s next title defence is widely expected to be against Leon Edwards (#3) this summer, seven years after their first meeting. It’s another rematch for the champion, who boasts a 4-0 record against Saturday’s main event fighters.

Naturally, there’s a rush from fans and media alike to crown the next contender but Covington, while closest to beating Usman, will look to reaffirm why he’s the division’s true no. 2 tomorrow.