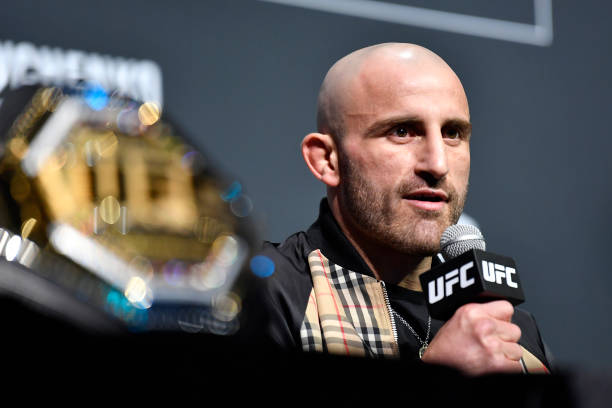 It’s taken longer than expected, but as the saying goes: good things come to those who wait. So, will April 9 prove another successful title defence for Alexander Volkanovski? What about the eagerly-anticipated bantamweight unification battle between Aljamain Sterling and interim titlist Petr Yan, a rivalry left to fester after their controversial ending last March? We will see.

Volkanovski vows to make up for lost time 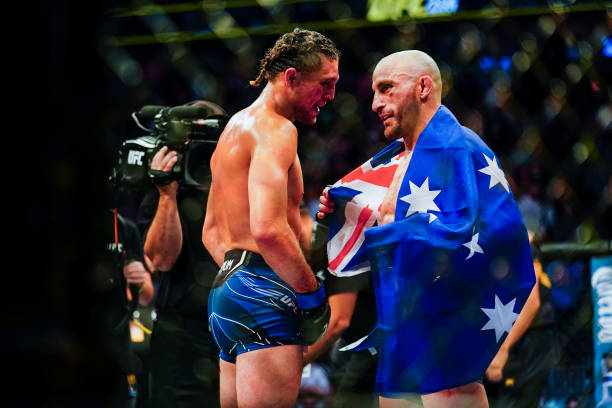 Volkanovski and Ortega talk after their Fight of the Year contender at UFC 266 back on Sept. 25

After winning a featherweight firefight for the ages vs. Brian Ortega last September, Alexander Volkanovski has finally begun earning the respect his skillset deserves inside the Octagon.

Inactivity – through no fault of his own – hurt his credentials when you consider an untimely bout with COVID-19 saw him sidelined for several months last year, it’s understandable recency bias rules supreme in a division where many believe Max Holloway should be a two-time champ.

Time waits for no man and that’s perhaps partly why he has stressed a need for more activity, further fights, to continue building a legacy which reads 10-0 in the Octagon, two championship defences and a current winning streak only bettered by welterweight king Kamaru Usman (15).

In rarefied air among his contemporaries, the 33-year-old has a tough upcoming assignment but not one many were hoping they’d get after a prospective Holloway trilogy slated for March 5 was put on ice indefinitely as the former champion sustained another undisclosed injury.

Instead, a fresh matchup awaits him in the form of Chan Sung Jung (#4) – The Korean Zombie – who fell short against Jose Aldo nine years ago, in his first and only title shot to this point.

In terms of fight odds, they speak for themselves. Volkanovski is an overwhelming -770 favourite to retain his strap for a third time, while Jung is a +540 underdog.

This will be a safe bet for those looking to get a wager in. Take advantage of those odds by seeing what current offers at Caesars Sportsbook are available.

Keep in mind this is for new players only but if you’re making your first bet, make it count. Depending on the sportsbook, the odds vary slightly but it’s clear that none of them favour Jung.

So, why is korean Zombie a heavy underdog here? The Korean Zombie flexed his boxing acumen against Ige, but Volkanovski’s defence is far superior

There’s a reason for that. While The Korean Zombie’s fighting style quickly endeared him to fans in previous years, it’s also not exactly one conducive to winning the most difficult fights.

Despite being a black belt in Brazilian jiu-jitsu, Jung doesn’t feel compelled to utilise submissions unless the chance arises. He lands considerably less significant strikes than Volkanovski (4.07 to 6.42 per min), his accuracy is 13% less and defence also weaker too.

All that historical damage accumulation isn’t a good sign, in what could prove another tactical war of attrition for the Aussie.

After injury and mandatory military service put him on the shelf for three full years, the 35-year-old has experienced highs and lows on his return – contrasting defeats by Yair Rodriguez and Ortega, as well as first-round finishes of Renato Moicano and former 155lb titlist Frankie Edgar.

Perennial contender Dan Ige did well but ultimately bit off more than he could chew in a June main event last year, though TKZ certainly wouldn’t have expected a title shot after defending his ranking. Now, he could stun a champion whose confidence is growing with each appearance.

Even while armed with a submission threat and an unpredictability most could only wish for; you cannot help but remember just how comprehensively Ortega outboxed him to earn the previous title shot. So, will he fall short again? Or does he have better tricks up his sleeve? 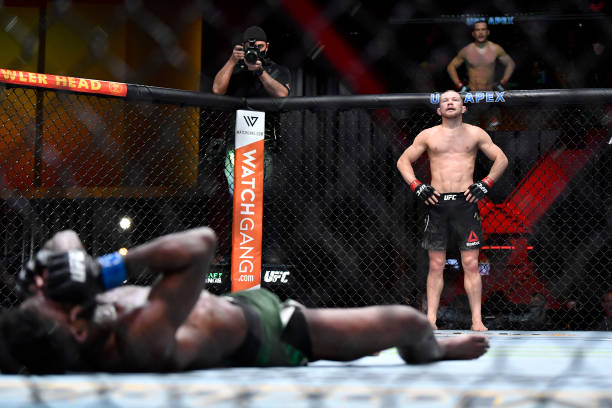 Yan looks on after delivering an illegal knee in R4 of his BW title bout vs. Sterling last March

Elsewhere on this intriguing card, we should finally have closure at 135lbs as Sterling-Yan 2 promises fireworks in the co-main event between two world-class bantamweights with a grudge to settle after their first meeting was marred by controversy last March with an illegal knee.

Before then, one-time title challenger Gilbert Burns (#2) prepares to face the promotion’s highly-rated bogeyman in Khamzat Chimaev (#11) as all at welterweight will be watching on with vested interest given the latter’s bold claims about his title aspirations after a crazy debut year.

Burns vs. Chimaev is an exciting welterweight clash, that could be a five-round main event in itself