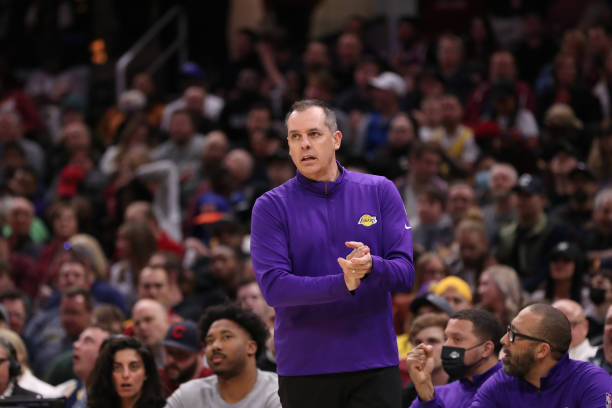 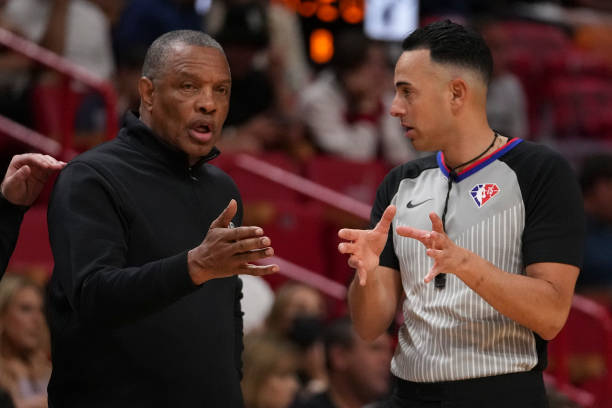 After logging a 30-52 record this past term, thus missing playoff basketball for a league-record 16 seasons now, the Sacramento Kings are unsurprisingly opting into another fresh start this offseason after deciding against giving interim head coach Alvin Gentry the reigns permanently.

Gentry, 67, has one year left on his existing deal with the franchise and could remain in California with a front office role per a follow-up from ESPN’s Adrian Wojnarowski earlier today.

After being elevated to interim HC as they fired Luke Walton in November, there were performance-related benchmarks that would decide if the organisation would offer him the job on a long-term basis. Considering their inconsistent form, that clearly hasn’t been the case. 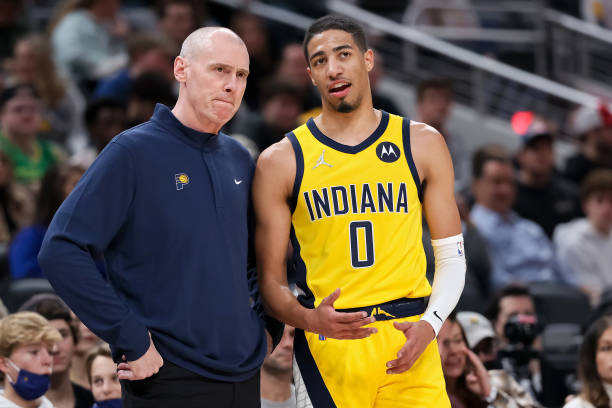 Carlisle chatting with midseason acquisition Tyrese Haliburton, who Indiana hope to build around

Although 2021-22 has been an underwhelming season, one which saw their two-time All-Star traded at the deadline, Rick Carlisle is in for the long haul. Don’t take my word for it, here’s what the man passionately told assembled reporters after the Pacers practiced last Thursday:

“Let me be absolutely clear, I’m here to coach this team for the long haul, if they’ll have me, and I’m not afraid of any aspect of a rebuild one single bit, not one bit.

One of the reasons I came back to Indiana (is) because this is like family to me, my experience here as an assistant and younger head coach is one of the reasons that I’ve been able to have a career that probably would’ve been beyond my wildest dreams.

Sometimes you gotta take two steps back to take three or four forward and that happens to be the position we’re sitting in right now.”

He went on to discuss an exciting summer ahead, where they could potentially have a top-five draft pick – the franchise hasn’t had one for over 30 years – and depending on how things shake out in this week’s play-in tournament, the Cleveland Cavaliers could owe them a first aswell.

Despite speculation linking him with the exit door, highly-rated big man Myles Turner has spoken of his eagerness to play alongside Tyrese Haliburton – while key PG Malcolm Brogdon said he’s happy to stay after watching helplessly as injuries limited him to 36 games this term.

That encouraging reassertion during their exit interviews earlier today is in contrast to Shams Charania’s piece in the Athletic, floating the possibility that he and sharpshooter Buddy Hield could be pieces in a theoretical Russell Westbrook trade from the Lakers this coming offseason. 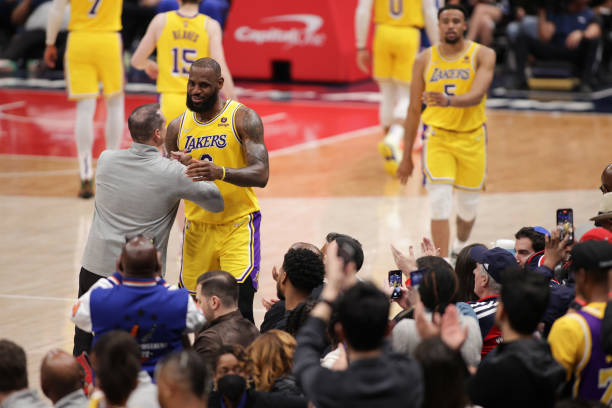 Vogel and LeBron, who is now going to adopt a hands-off approach to LA’s business this summer

“Today is not going to be a day of finger-pointing and unwinding all the specific reasons, we just felt organisationally, at the highest level, it was time for a new voice.

That’s not to say anything against the incredible accomplishments that Frank Vogel has had. He was a great coach here, and he’s going to go on to be a great coach somewhere else.”

Actions speak louder than words and while no-one can dispute this announcement was coming, the timing and manner in which it was delivered only reflects poorly on a demanding franchise who never seemed truly 100% into the man tasked with leading a flawed ball club this year.

There’s not much really for me to say on this topic, other than the tidbit the Lakers haven’t yet decided what to do about Vogel’s coaching staff – retaining them in the interim while being open to the possibility of a wholesale clearout this summer once it’s clearer who his successor is.

Russell Westbrook is back on the defensive and understandably so, after being quickly made scapegoat for the team’s shortcomings in another injury-hit year seeing them miss out on the postseason altogether while lesser West teams (Spurs, Pelicans) are among those in the play-in.

The bold summer trade move has aged more poorly than most expected, while questions remain about how viable the LeBron-AD tandem remains given their respective injury issues. 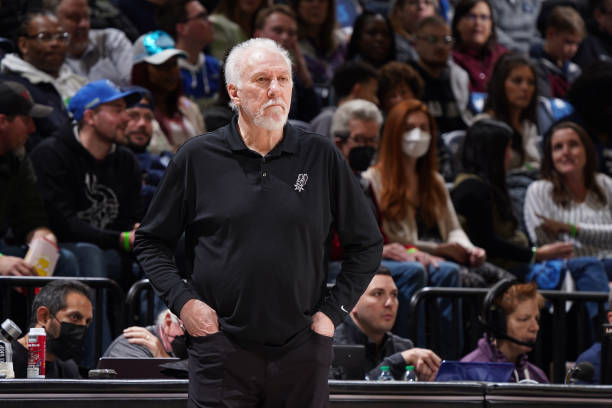 Popovich, who turned 73 in January, may retire or continue into next season and beyond

His existing contract expires at the end of the 2022-23 season, though some experts believe it’s likely he’ll wave farewell to the sport he has devoted his life to in the coming weeks.

On his podcast earlier today, highly-regarded sports analyst Bill Simmons had this to say about the situation and whether Spurs vs. Pelicans will be the legendary coach’s last game in charge:

“Starting to feel that way, little breadcrumbs being sprinkled left and right. I think he’s probably done after this year, I don’t have any inside info – just a guess, reading the tea leaves.”

Ryen Rusillo meanwhile said while it is easy to speculate, there’s no smoke without fire and floated multiple theoretical situations that have happened in recent months as evidence.

San Antonio actually being competitive, highlighting Dejounte Murray’s All-Star leap, highly-rated assistant coach Becky Hammon and how she may not have agreed a new job elsewhere unless they already have a succession plan in place which doesn’t involve her taking his role. 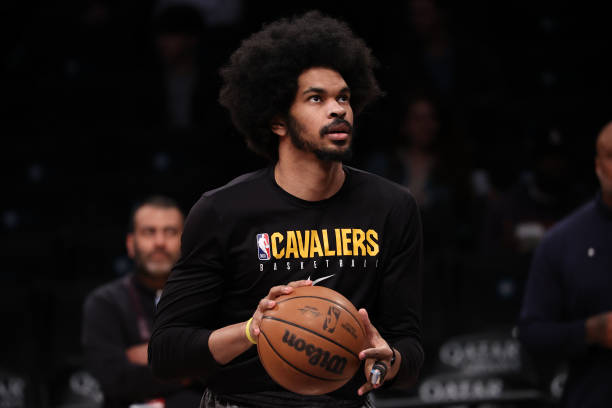 Allen, a first-time All-Star this season, has officially been ruled out of Cleveland’s play-in game

The winner will play the Boston Celtics [2] in a first-round matchup, while the loser faces either Atlanta [9] or Charlotte [10] to decide who plays against the East’s top seeded Miami Heat.

An MRI scan has confirmed Dallas Mavericks superstar Luka Doncic sustained a left calf strain in their regular-season finale, was seen wearing a protective boot earlier today. With their first-round series against Utah [5] starting on Saturday, there’s currently no timetable for his return.

If LaMelo Ball and the Charlotte Hornets are to surpass last year’s attainment by emerging from the play-in tournament intact, they must adapt and have to do so without Gordon Hayward (foot) as the 32-year-old remains sidelined with discomfort in his left foot and is out indefinitely.

As for Hayward’s former team in the Celtics, they’re quietly hoping they can welcome back the services of defensive stalwart Robert Williams (torn meniscus) at some stage during the postseason, as the big man stayed in Boston to “expedite the process” of his recovery last week.