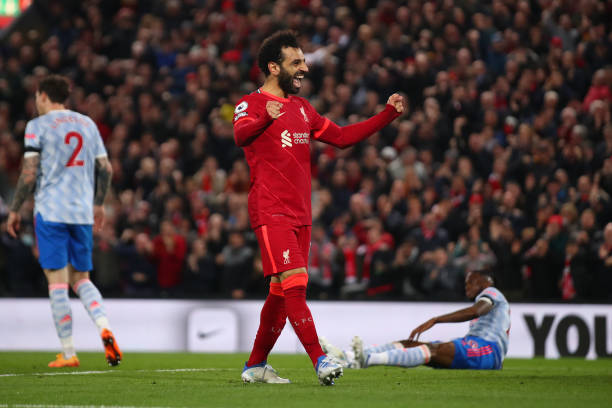 Mohamed Salah’s fifth brace of the season helped Liverpool cruise to a 4-0 victory over another disappointing Manchester United showing at Anfield, sandwiched between an early Luis Diaz opener and Sadio Mane’s first-time finish as Ralf Rangnick’s change of shape didn’t help the visitors from another heavy deficit – the fifth time they’ve conceded three or more this term. 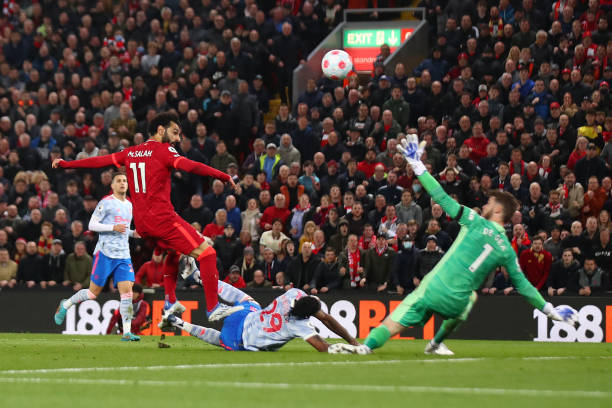 Salah applies ice-cool composure to dink over de Gea for Liverpool’s fourth, and complete his brace

On commentary, Peter Drury was almost in disbelief witnessing it live.

Players purring at their zenith, he called it. Sadio Mane’s majestic around-the-corner disguised pass for Mohamed Salah was the tonic needed to propel Liverpool into a two-goal cushion, just 22 minutes in, with David de Gea could only watch it deftly tucked into the bottom corner.

Paul Pogba, billed as a spectacular £93.2m signing upon his 2016 return, was ironically jeered off the pitch – limping off with an injury ten minutes earlier. Five minutes beforehand, the Reds’ winter signing Luis Díaz broke the deadlock with remarkable ease. This was going to be ugly.

All the pre-match hubbub would’ve surrounded Phil Jones’ surprise inclusion from the start, as Rangnick changed shape and personnel after needing Cristiano Ronaldo’s 60th career hat-trick to bail them out of trouble against Championship-bound Norwich City at the weekend.

Making his first league start since their 1-0 home defeat by Wolves on January 3, the 30-year-old was later then sacrificed at half-time for Jadon Sancho. You’d assume he played poorly to get hooked so early, but didn’t fare any worse than Victor Lindelof or captain Harry Maguire did.

Perhaps he could’ve done more to cut out the first, but damage already proved irreversible as Diogo Dalot was caught up the pitch and Maguire in no man’s land not too far away. United lacking team cohesion is well-documented, but to see it unravel this quickly was startling.

Liverpool have shown on multiple occasions their ability to blitz opposition in furious forays forward and there was a lingering sense of inevitability about how this matchup would unfold.

Whether it was Alisson’s cheeky chops in his box under pressure from Bruno Fernandes, United being starved of proper possession and effortlessly marshalled off-the-ball whenever a promising chance arose, or how their hosts just seemed in total control, this felt ominous.

Take this clip for example. Marcus Rashford is effortlessly dispossessed, Alisson’s exuberance opens up a pass for Fabinho from which you can see the spaces opening up for the hosts:

Diaz had a second goal disallowed for offside shortly after the half-hour mark, after United made another defensive mistake which led to Fabinho feeding him at the far post.

Sancho was the visitors’ only bright spark in an otherwise forgettable second-half, happily taking players on and carving their best chance of a miserable evening.

Alisson kept his composure and a low centre of gravity off-his-line to produce a double stop: first thwarting Rashford, then Anthony Elanga, before the linesman flagged for offside on the far side. Had either been razor-sharp with their finishing, the goal would’ve stood after VAR review.

You could sense Anfield was starting to get edgy, such was Liverpool’s sluggish play immediately after the restart. After enduring a restless start, Klopp’s men soon increased their advantage.

Elanga was robbed of possession, with Andy Robertson charging forward before teeing up Diaz: he slotted across for Mane, whose first-time effort arrowed into the far corner. Nerves eased. 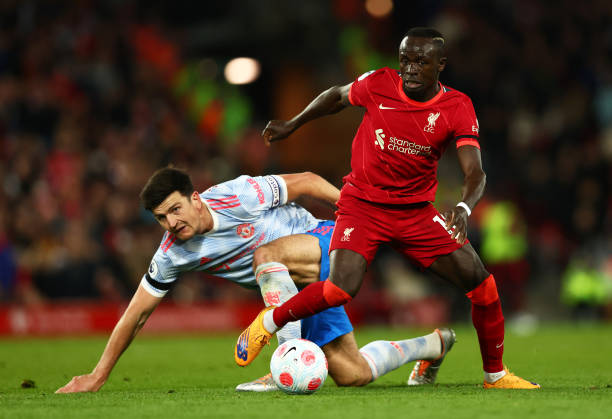 A familiar sight: Maguire looks on helplessly as Mane leaves him in his rearview mirror

Robertson was again at the forefront of their fourth and final goal, this time pinching substitute Hannibal Mejri’s pocket after Maguire’s slack lofted pass into the youngster on the far side.

Diogo Jota, another substitute, slipped Salah in with a defence-splitting pass – Maguire unknowingly vacating the space in-behind at the heart of United’s backline, so the Egyptian advanced, dinking over de Gea despite Aaron Wan-Bissaka’s efforts for a late recovery tackle.

Post-match, Robertson was asked how he felt on another memorable win in what may still prove another historic campaign as they target an unprecedented quadruple. His response was telling:

“A really enjoyable night, not many [teams] would’ve been able to live with us tonight – our work off-the-ball was [the best], high energy… we didn’t let them have time on the ball. Some incredible goals scored but we were exceptional.”

As I’ve said before, displaying such an infectious workrate – from the frontline down – is how they make opposite teams uncomfortable and essentially play into their hands.

With potentially 11 more games to play between now and late May, there will be times where their finishing isn’t up to their exceedingly high standards. Play like this, they won’t need it.