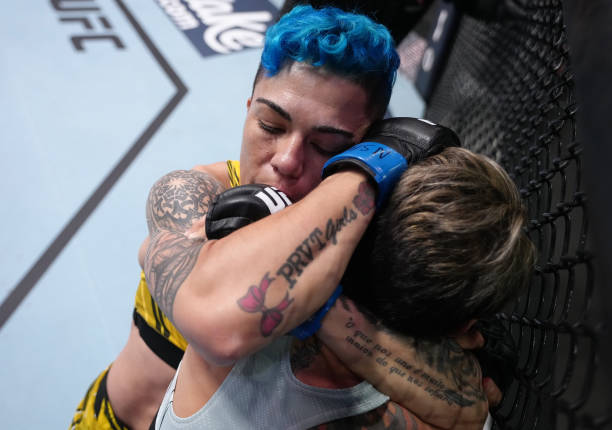 After falling short against Valentina Shevchenko in her bid to become a two-weight world champion, the former women’s strawweight titlist headlined a largely forgettable Fight Night card from the Apex on Saturday night and wasted no time: delivering a first-round standing arm-triangle choke win over her Brazilian compatriot, Amanda Lemos on her return to 115lbs. 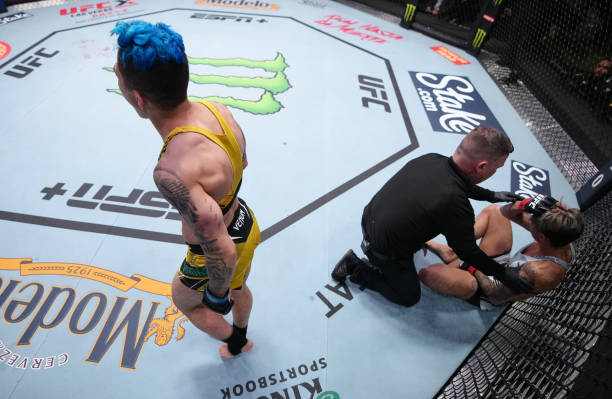 As far as pioneers for women’s MMA are concerned, Jessica Andrade continues flying the flag with distinction and looks primed for another title opportunity before long. It’s remarkable to note the Brazilian is still only 30, yet has already produced a body of work many only dream of.

Besides suffering a R1 submission defeat by recently-retired Marion Reneau in Feb. 2015, eight of her nine career defeats have either come against UFC champions or former title challengers.

Liz Carmouche – who beat Andrade in July 2013 – added herself to the champion’s corner at the third time of asking, albeit in a different promotion, by inflicting Juliana Velasquez’s first career defeat with a fourth-round TKO at Bellator 278 on Friday. For context, she turned 38 in February.

Although the contrast in their rankings didn’t immediately make sense as far as matchmaking was concerned when this matchup was made, Amanda Lemos was keen to test her skills against a former champion – welcoming her back to a division she briefly ruled over in 2019.

Daniel Cormier and Paul Felder couldn’t mask their surprise on commentary, as Lemos’ purposeful stand-up start was abruptly eroded up against the fence by a deceptively strong former champion whose quick thinking paid dividends en route to a submission win.

Andrade’s physical strength, despite her 5ft 1in frame, is why many expected she’d prove Valentina Shevchenko’s toughest title defence at 125lbs last year. Instead, the 34-year-old ultimately was too good everywhere and channelled doubts into a scarily complete showing.

Andrade has always spoken of her willingness to work up into favourable positions as far as the title picture is concerned, but it’ll be interesting to see where she is in next week’s strawweight rankings update after such a statement against Lemos – who was riding a five-fight winning run.

During her post-fight callout, she highlighted two upcoming rematches that are of interest: Joanna Jedrzejczyk vs. Zhang Weili, as well as Namajunas-Esparza 2 at UFC 274 next month. Failing that, a title eliminator against the surging Marina Rodriguez (#3) wouldn’t go amiss either.

Through an interpreter, she said:

“This is my division, where I’m going to perform my best. I know I’m ready to fight again for the title, if you guys can give me a shot, I’m going to be here.

I think this is a big win, no matter what, the big thing is I want to keep active. I don’t mind fighting at flyweight, if there’s something at bantamweight, I’ll fight there. Just keep me ranked, I’ll fight everywhere.”

It’s hard to argue against that notion and even rarer to see world-class contenders content risking their hard-earned ranking – ala Gilbert Burns – without future guarantees in place.

Besides the aforementioned trio, there isn’t much in the way of genuine title contenders at 115lbs. Shevchenko, slated to face Taila Santos at UFC 275, still appears peerless at flyweight.

The bantamweight division was shaken up by Julianna Pena’s stunning win over Nunes in December, but with both set to be TUF coaches ahead of a rematch, how long will that last?

It’s constantly hungry talents like Andrade who keep the ball rolling and we can appreciate her handiwork – something the Brazilian’s made increasingly easy for the most part in recent years.