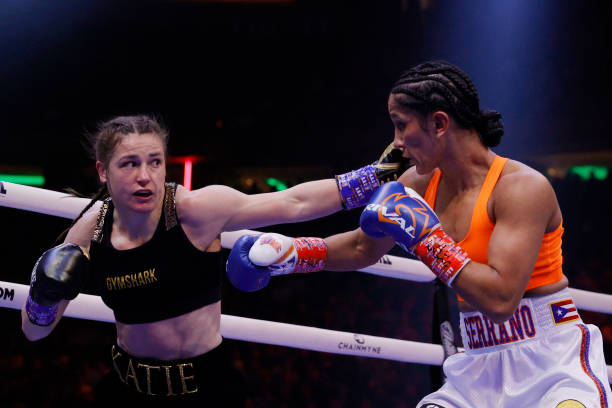 Billed as the most heavily-anticipated women’s boxing bout of all-time, this thrilling encounter didn’t disappoint but questions will linger and a rematch is poised after undisputed lightweight titlist Katie Taylor retained her belts with a split decision victory over unified featherweight champion Amanda Serrano in-front of a sold out 19,187 crowd at Madison Square Garden. 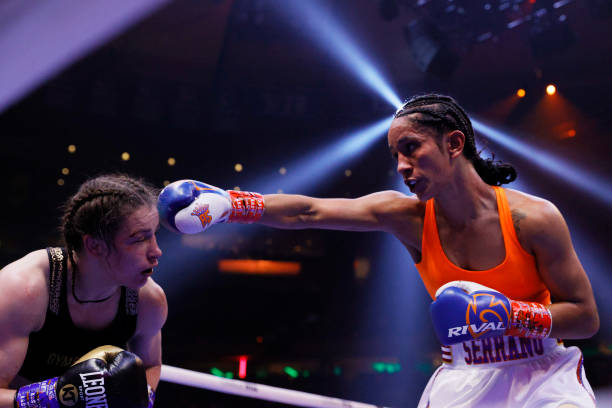 Serrano did her best work in the middle rounds, but Taylor found her second wind late to rally well

After engaging in a close and cagey first round, you could be excused for thinking this would be a tactical battle between two pound-for-pound stars on the biggest stage yet. Unchartered territory as far as women’s boxing is concerned, they quickly justified MSG’s electric atmosphere.

ESPN paused their Top Rank broadcast as promised, with Shakur Stevenson vs. Oscar Valdez purposely delayed so a historic matchup would get the rightful shine beforehand. It exceeded expectations, though the final outcome will have fans worldwide debating who truly prevailed.

The champ is here 👑

"I'm wasn't sure anything could be better than my Olympic victory, but this was the best night of my career for sure"

Katie Taylor also keen to sell out Croke Park for the rematch pic.twitter.com/H43JQIAKgT

Isn’t that a good thing? For what it’s worth, my scorecard was the same as Benoit Roussel – 96-94 for Serrano. The other two judges ringside, Guido Cavalleri and Glenn Feldman, disagreed – one by three rounds, the latter somehow gave Taylor a 7-3 advantage over ten two-minute rounds.

Hey my ppl I didn’t get the decision but I think I fought a great fight
Congratulations to @KatieTaylor who promised me we would rock the house. I’m happy we made Womens boxing look great tonight.
Now I go & start spending some of this money lol. pic.twitter.com/gyQ0CJfK0k

Women have long campaigned for parity as far as round length (12 x 3) and this matchup, while fascinating, only amplified the need for it. Truthfully, you could describe a lot of these rounds as competitive enough to award in either direction such was the nip-and-tuck action on display.

Some critics had Taylor up 3-0 through six minutes despite Serrano’s solid work, but even if that was true, the 35-year-old needed to win each of the final three rounds and certainly did: closing the show well, having been baited into engaging in a firefight suited to Amanda’s strengths.

She looked noticeably tired towards the end of round four and was badly buzzed by a relentless Serrano in the fifth, so much so that you couldn’t argue against a 10-8 round as the Irishwoman did well to survive an onslaught packed with punch combos and absorbing damage aplenty.

On unsteady legs in the sixth, she gradually got her bearings back and responded accordingly as time wore on with Serrano – two years her junior – starting to ease up on output, having expended such energy seeing a stoppage win in the bright lights as the crowd roared them on.

That, as well as a conscious decision reverting back to her box-and-move tactic, was key in helping Taylor control distance better while repeatedly stinging the Puerto Rican with clever check left hooks, counterpunches and furious flurries whenever the opportunity presented itself.

Taylor continued to sneakily land punches in the seventh, while upping her movement and importantly opting against more brawling in the pocket during R8.

Serrano, for all of her impressive work earlier, appeared to have been physically flagging as they headed into the championship rounds.

Taylor boxed-and-moved her way forward, something she should’ve adopted earlier, and R10 was packed with a competitive conclusion to a thrilling spectacle.

I had it 6-4 in Serrano’s favour, only just, but you couldn’t complain with a draw or narrow Taylor win either as she stepped it up once things went down the stretch.

As far as what’s next, an immediate rematch makes sense but boxing never seems to align logic with action – at least not in a timely manner.

Taylor won’t be short of big fight offers as she looks to further her legacy with retirement creeping on the horizon, while Serrano will likely return to her natural featherweight class for another three-belt world title defence later this year. We’ll have to wait and see until then.