Ahead of next month’s PPV event in Singapore, with two championship fights and a highly-anticipated title eliminator at strawweight, the six headline fighters spoke on a virtual press conference with a variety of answers – from what’s to come for them respectively in June and potentially beyond, like double-champ status and one fighter eyeing another title rematch. 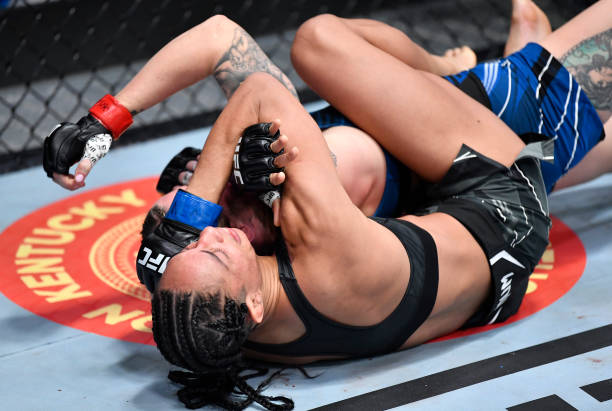 Since losing a split decision to Mara Romero Borella on her UFC debut in Feb. 2019, Brazil’s Taila Santos has won four straight fights – including her first finish and Performance of the Night bonus ($50,000) for a R1 submission win over perennial contender Joanne Wood in late November.

Considering Valentina Shevchenko’s dominance at women’s flyweight, the desire for fresh matchups coincided with Santos’ surge up the rankings.

Currently #4, the 28-year-old represents a new challenge for the champ and she gave an understandable answer when I asked what the key to victory was, ahead of their title fight.

MO: Valentina, I see you smiling over there! So what’s your response to that? 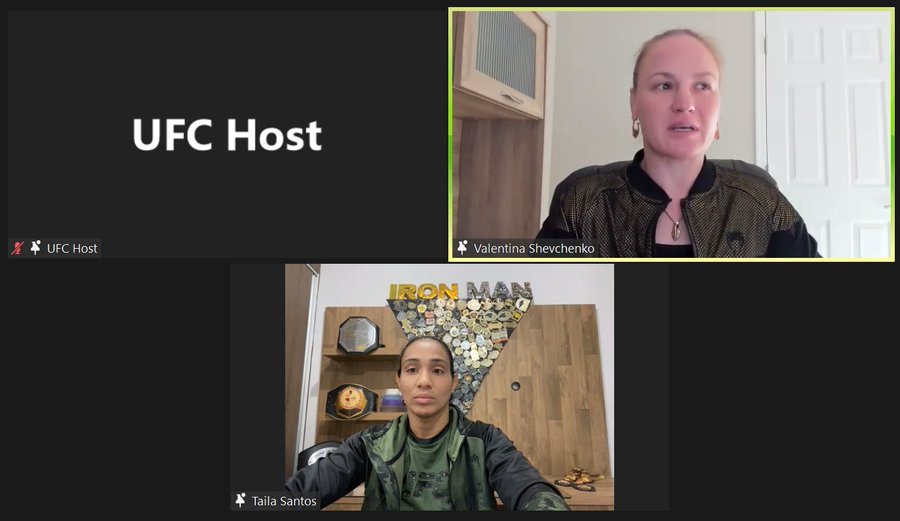 Shevchenko doubled down on her desire to keep creating history, staying active and defending her belt

This is like the most exciting part of this contest, to see frustration on someone’s face when they understand they are not better, that’s fine, I have no issues fighting on the ground, stand-up, wrestling, being UFC champion requires a lot of skills and abilities, you can’t be one-sided.

I don’t know if that’s really her tactic but we’ll see, I’m ready for everything.

Among the other questions asked, Santos spoke about always dreaming of this fight and now the moment is here, her coaching team have adjusted their strategy to better deal with Shevchenko than other contenders previously fared – including compatriot Jessica Andrade.

On blocking outside noise, suggesting she’s another lamb to the slaughter:

“Those things don’t affect me, I’ve always been of the philosophy that hard work and the journey get you there – always been a quiet girl, on my own mind, I don’t let outside noise in.

I don’t need people to believe in me, as long as I do, it’s going to happen regardless… think of the hard work, it’s my turn, my moment, I’m due for this.” 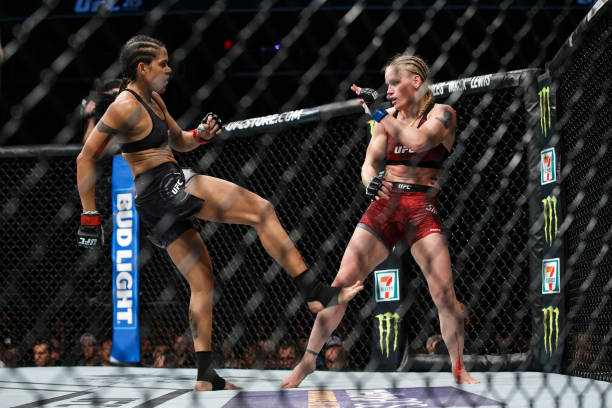 Shevchenko still believes a Nunes trilogy is inevitable, but is also prepared to face Pena again

Shevchenko, attempting to make the seventh defence of her title, has multiple records at 125lbs and wants to continue making history by staying active and utilising her prime properly.

“Who knows what will happen?

I don’t know what the end of the year will bring, maybe to fight in different weight classes, to go for double champ status, that’s what me and my team are speaking about… just waiting for the right moment to happen.”

They’ll do battle again sometime later this year, with Valentina prepared to face either woman – a trilogy bout vs. Nunes or rematch against Pena, who she submitted in Jan. 2017.

“Pena? Why not, we fought her a few years ago and I submitted her. It’s going to be an exciting fight, she could go down and try to challenge at flyweight.

If Amanda is in the same shape she fought last time, definitely Julianna has the same chance to win [again] but if she returns the way she fought me, I think she’ll regain her belt and we will still come back for this trilogy. I don’t care really, I can fight both of them.”

On whether Pena, a huge underdog, overcoming her compatriot gives Santos confidence she can replicate similar success this summer:

“Of course. Both have a 100% chance of winning, everyone comes into a fight at 100% like a video game, the one more spiritually ready, more focused and prepared will come out victorious.”

Shevchenko had the last word though and it was emphatic:

“That’s exactly the point but don’t forget, it’s a mental game for all fighters. We know Amanda doesn’t have a strong mental game, we could see that in her previous fight – everyone can break her – but me, I have a strong one.”

Joanna has revenge and redemption on her mind 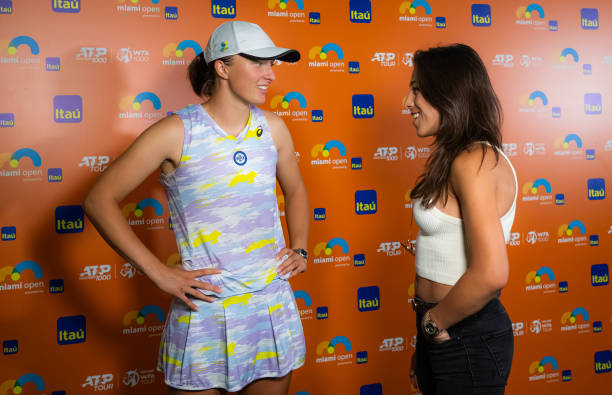 Joanna having a chat with Polish compatriot and tennis world no. 1 Iga Swiatek in late March

26 months after their unforgettable title fight, former women’s strawweight champion Joanna Jedrzejczyk will look to finally avenge her split decision loss by Zhang Weili – albeit in three rounds, rather than their five-round championship clash in the last pre-lockdown PPV.

For what it’s worth, I felt the Polish woman did enough to win that night, but she’s now coming off the longest inactive stint of her career and we’ve seen what happens when fighters leave matters in the hands of the judges. Although she’s been training hard, will she suffer from rust?

Weili experienced that late last year on the losing end of a split decision to Rose Namajunas, another now-former champion who has a pair of victories over these two competitors. 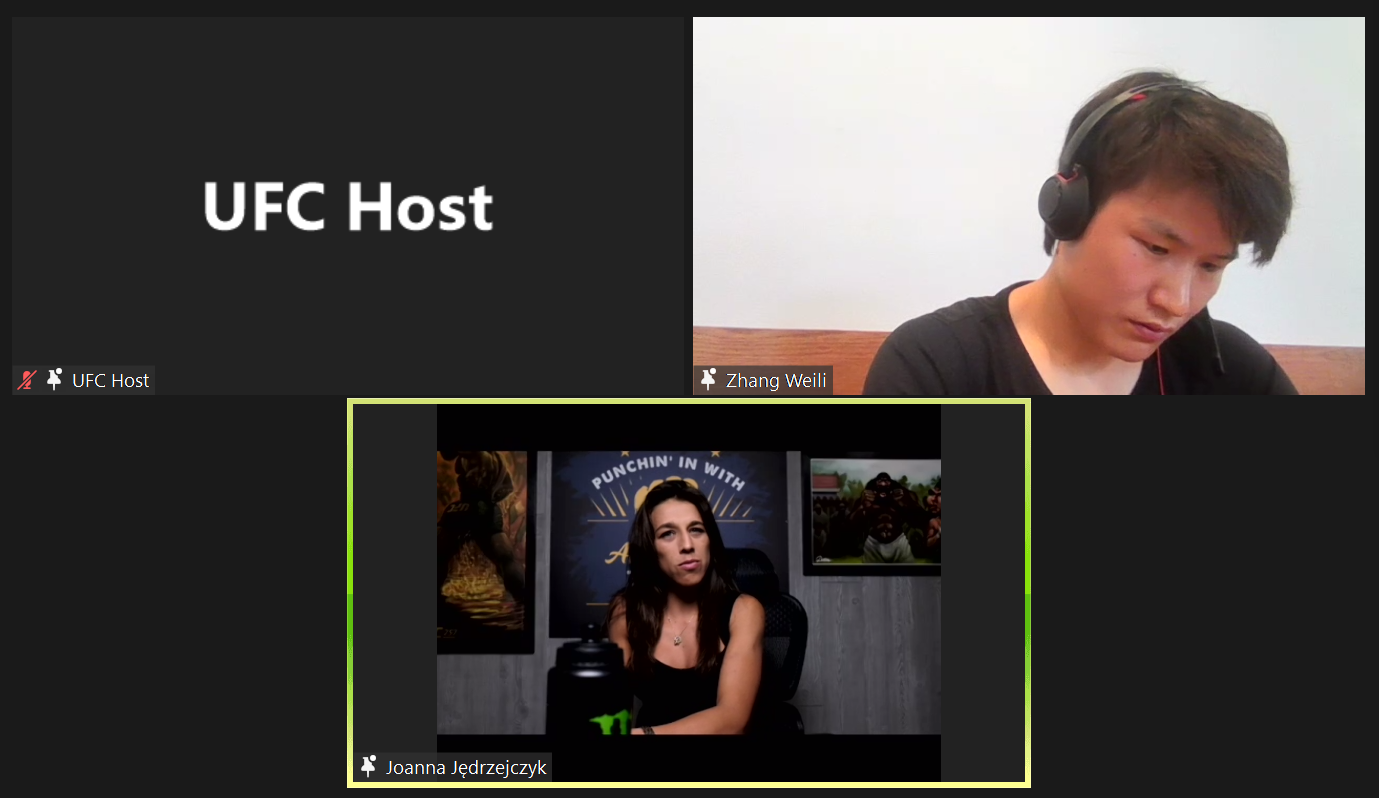 This is essentially a title eliminator to decide who will feature as two-time titlist Carla Esparza’s first title defence, having previously lost against Jedrzejczyk in March 2015.

“I was surprised how it [Esparza-Namajunas 2] went, thought Rose won and that Carla would look better … for me she looked the same as seven years ago when we fought for the belt in Dallas. History likes to make a circle, soon to be the champ [again].

I know how big my legacy is, I’m the strawweight queen, put a lot of effort and work into this division. I feel even more motivated, I’m tired because I’ve been training so hard — since January — 11 to 13 times a week the last four months.” 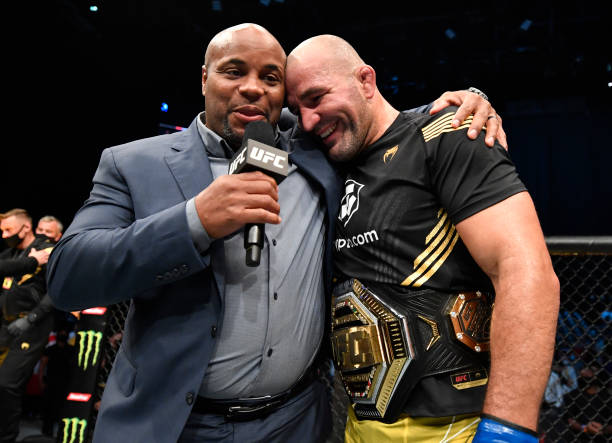 No-one expected we’d be here, but Glover Teixeira’s persistence and grit were key in helping the 42-year-old Brazilian become the promotion’s second-oldest champion after Randy Couture.

You can say what you want about now-former titlist Jan Blachowicz and how he produced an off-colour display in Abu Dhabi en route to a R2 submission loss, but those are merely excuses.

That would be doing Glover’s work a disservice, especially given he’s on a six-fight win streak now – including some impressjve post-lockdown finishes against one-time championship challengers Anthony Smith (#5) and Thiago Santos (#6) where he displayed his versatility.

It goes without saying that he’ll have to be focused in his first title defence and while aware of Prochazka’s skills, a lot of what happens next month will be down to him. 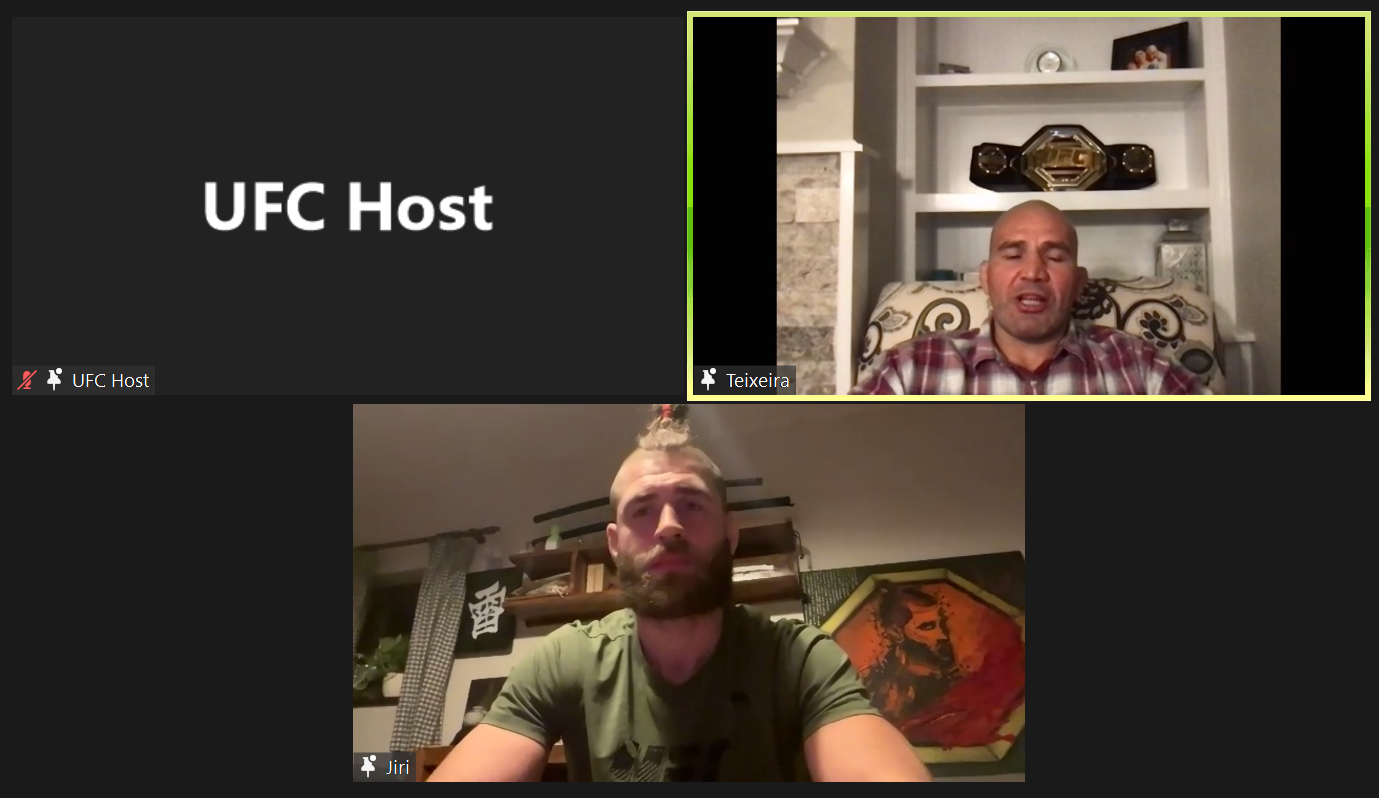 Glover knows next month’s challenge won’t be easy, but insists he’s well-prepared regardless

On whether it’ll be a slight advantage for Jiri, having had multiple fights in Asia before:

“It could be, but that doesn’t bother me. Henry [Cejudo] is a great wrestler, he needs some of that fighting me, I’m going after takedowns, everything, so hopefully he learned some good stuff.

Some people are gonna root for him, he’s young and has the look but has to pass through me, I’m very prepared to defend my belt. He’s the new gen, takes risks and we both put on exciting fights. I just need to focus on conditioning, my style, start looking at videos a bit and adjustments at the end of camp.” 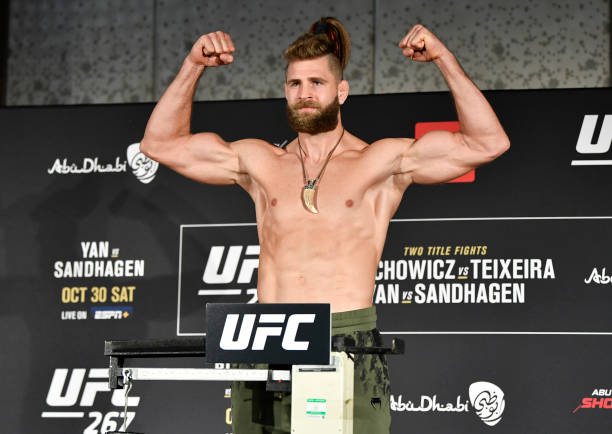 After weighing in as an alternate for Blachowicz-Teixeira at UFC 267, Jiri gets his shot

It will have been 13 months since Jiri’s last Octagon appearance, a vicious R2 KO win over Dominick Reyes, should everything go as planned, and they finally meet in Singapore.

Having taken his camp to Thailand, the 29-year-old was succinct with his answers – explaining a desire to be ready in their timeline, weather and acclimatise to the conditions faster abroad.

If anyone needs to do that, it’s definitely the champ. 40% of Prochazka’s fights have been Asia, all but one of his fights under the Rizin banner between 2015 and New Year’s Eve in 2019.

On finetuning his explosive, fan-friendly style to be more well-rounded, the Czech said:

“My last fight was changed, I have to change this [explosive, aggressive] style, especially on the ground.

My coaches, everybody knows my strong weapons and weakest weaknesses, so I’m drilling those with Henry and Dan, preparing dangerous techniques and believe in myself much more than ever. I have to be dominant on the ground.” 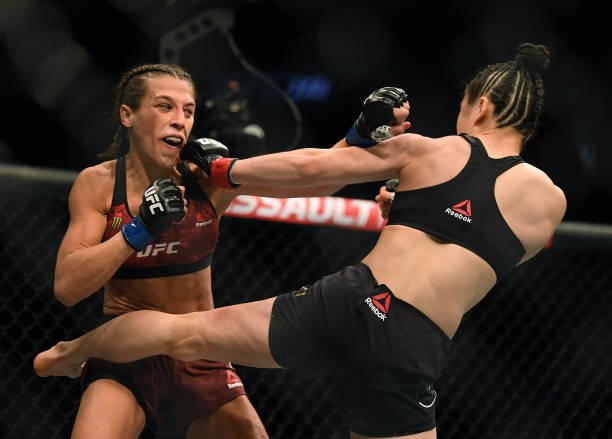 Even with two less rounds, will Joanna and Weili steal the show again like they did at UFC 248?