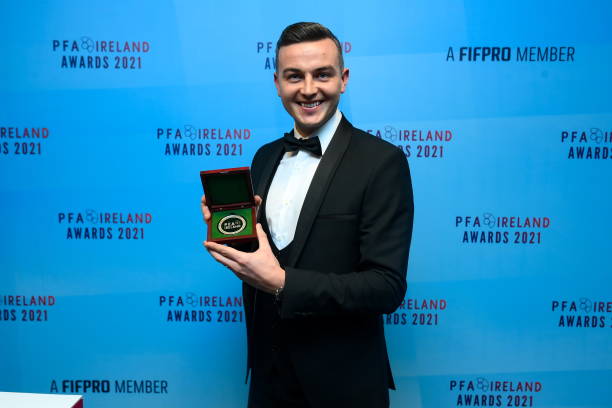 Despite a purposeful start, Treaty United were their own worst enemy as they limped to a 2-2 draw against ten-man Cobh Ramblers at the Markets Field in the First Division tonight. The result means Tommy Barrett’s men are now winless in their last seven across all competitions, despite taking the lead in three of those – fullback Marc Ludden netting a brace from the spot.

Dean George and Matt Keane both missed chances early on, before Ludden opened the scoring from the spot after six minutes as Harlain Mbayo was punished for an inadvertent handball.

Even though they were firmly in the ascendancy, the hosts conceded a remarkable own goal ten minutes later as Joe Gorman’s overhit back pass caught goalkeeper Jack Brady unaware and agonisingly trickled in at his near post, despite the 25-year-old’s best efforts to claw it off the line.

Witnessing that freak own goal seemed to energise Darren Murphy’s men, as James O’Leary in particular was a lively nuisance down the flank as Treaty were forced to make multiple defensive interventions to keep their visitors at bay.

Brady made a fantastic one-on-one stop to thwart Danny O’Connell on the stroke of half-time, while Jason Abbott’s inswinging corner delivery hit the woodwork minutes later.

This week, Rams’ boss Murphy stressed his belief it was only a matter of time before results started to swing their way. To start the second-half, it looked like this would be their moment.

Treaty were sucker punched from a poorly defended Pierce Phillips free-kick with players caught ball-watching everywhere, with the centre-back heading home from close-range.

O’Connell, who couldn’t believe he missed the aforementioned opportunity, turned creator to feed an unmarked Brendan Frahill. But just as soon as they were wheeling away to celebrate their turnaround, Mbayo was being read the riot act from his head coach on the touchline.

He meant well but made a mess of his attempt to shield a loose ball back to goalkeeper Sean Barron in the box, with an onrushing Joe Collins being subsequently clattered into as he too made chase.

The referee hesitated before pointing to the spot, such was the contentious nature of this impending decision, and Ludden again sent Barron the wrong way from twelve yards.

Cobh were still creating chances and could’ve retaken the lead nine minutes later after another well-worked passing sequence, but Luke Desmond saw his well-hit effort cannon off the woodwork.

Brady was rooted to the spot and this felt like another timely warning for the hosts not to ease up. Then, they had a numerical advantage to work with for the final 20 minutes plus stoppage-time as Ramblers fullback Darragh O’Sullivan was shown a straight red for cynically impeding Matt Keane on the edge of the box with a tug as he advanced goalwards.

It felt harsh but he was the last man and you could sense Cobh would have to suffer if they were to snatch a point in the end.

Pinned back in their own half and continuously pressured by constant waves of Treaty attacks, Barron made a big stop to thwart Collins’ well-executed half-volley. The hosts threatened and didn’t stop trying, but ultimately couldn’t find the winner they would’ve felt justified their play.

A pair of penalties could’ve settled it, but instead a freak own goal and defensive breakdown means they’re forced to share the spoils again. Taking everything into consideration, that point will feel like all three for the visitors. Could this be the start of their climb up the standings?