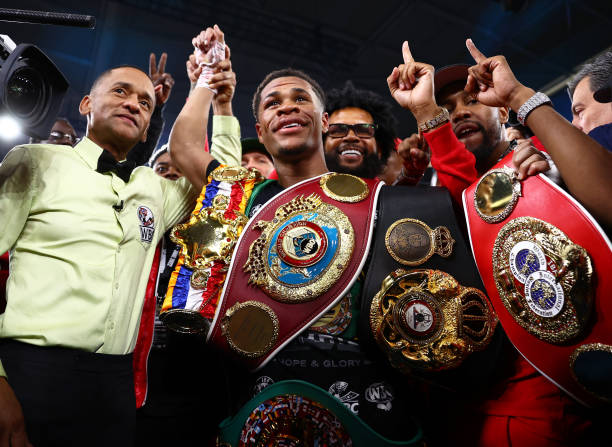 Some said there were flashes of Floyd Mayweather on show, others were underwhelmed and unsurprised by the outcome. Nonetheless, WBC lightweight titlist Devin Haney travelled to enemy territory and will return having made history as the eighth male undisputed champion in the four-belt era after a UD win (116-112, 116-112, 118-110) over George Kambosos Jr. 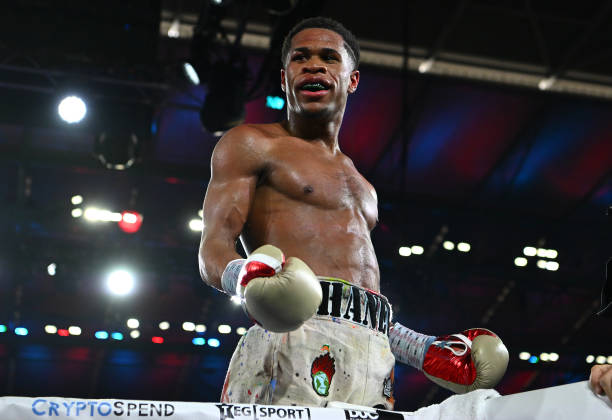 Formality: Haney celebrates on the top rope, encouraging fans to boo him before the result is read

He came, soaked it all up, conquered and it seems like he’ll be back for seconds if the now former champion gets his way. Devin Haney doesn’t turn 24 for another five months, by which time you’d hope there’s more clarity over the moving pieces at 135lbs, but it doesn’t matter.

Tonight is his night. The man many have been quick to ridicule for years, calling him a fake champion based on a technicality which he had nothing to do with (elevated from interim to full WBC title-holder after Vasiliy Lomachenko made franchise champion in Oct. 2019). No KO power.

Not quick enough. Doesn’t fight top opposition. Has been shown to have a suspect chin, isn’t special compared with Gervonta Davis and Shakur Stevenson, the list of criticisms continues.

Well, not anymore. The respect he deserves will come in its droves now after cruising to a comfortable decision win over Teofimo Lopez’s conqueror George Kambosos Jr. From start to finish, he controlled proceedings without difficulty and quickly had the Australian frustrated.

It all began with his jab and besides absorbing a sharp right-hand counter in round two which got the crowd’s attention, those inside Melbourne’s Marvel Stadium were reduced to infrequent moments to really get excited about for their man.

The tying up hurt Kambosos’ rhythm, as he smothered his work and tried frantically to get Haney where he wanted him. That proved easier said than done, against a world champion boxer constantly on the move and didn’t give George’s corner much to chew on through four rounds.

Sharp with his feints, punching output but not accuracy nor head movement, Kambosos was being frequently jabbed at range and you could see his face wearing the damage quite quickly.

This often became a stop-start affair with more clinching, something that was to Kambosos’ detriment given he was down big on the scorecards through 15 minutes.

He needed to start throwing combos and stringing his punches together, rather than landing one or two stray left-hands that may land and suddenly absorb return fire.

But Haney was slick, slippery and difficult to hit clean with any consistency. There was parallels to Floyd with his punch defence in R9, while Kambosos’ roughhousing tactics were admonished by referee Hector Afu in the tenth as you could sense him getting desperate.

Some of Haney’s scoring shots you couldn’t really see, as he hit them so quickly and exited.

Kambosos cut a frustrated figure in the latter stages before the final bell sounded, probably conscious of the fact he wasn’t doing enough to edge these rounds on the scorecards – home soil or not – and it’s even harder seeing him making the adjustments in a prospective rematch.

When you’re beaten as soundly as Kambosos was here, there’s no market for an immediate rematch. Whether stepaside money or a gentleman’s agreement to fight again, this doesn’t warrant a second go – unlike Charlo-Castano – especially as there’s other business at 135lbs.

Ultimately though, there was a rematch clause inserted as part of the contract negotiations for a reason and it’s almost impossible to foresee them not honouring that. Just look at how Fury-Wilder 3 was eventually forced upon the former, and how that matchup ultimately ended.

“He boxed his game, moved, I’mma change a few things and I take the risks… I didn’t have to fight him but gave him the shot straight away, we’ll do it again at the end of the year.

He had a smart gameplan, I’m sure it’ll change [next time]… this is boxing, fuck protecting records, two-time [champion]. This will ignite the fire even more.”