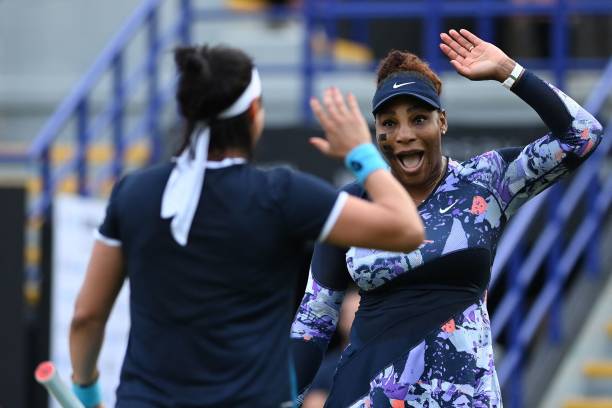 357 days after limping off injured in the first-round at last year’s Wimbledon, 23-time Major champion Serena Williams marked her return to tour with a fun three-set doubles victory alongside world no. 2 Ons Jabeur, as they recovered from 2-6, 1-2 down to overwhelm Marie Bouzkova and Sara Sorribes Tormo in a deciding set tiebreaker at Eastbourne earlier today. 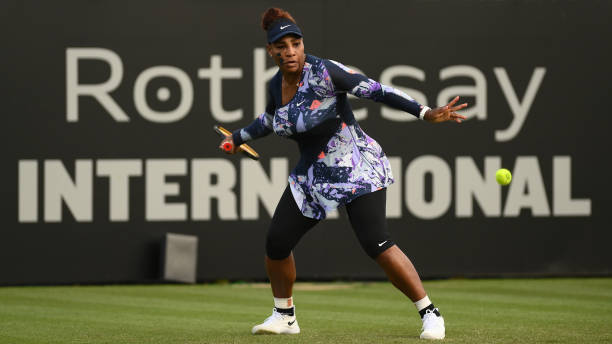 Speculation suggested Serena wouldn’t feature until the US swing, but she’s back in time for SW19

Using Eastbourne to gain match sharpness before Wimbledon starts next week, Serena Williams and Ons Jabeur – now at a new career-high world no. 2 ranking – recovered from a sluggish start to win 2-6, 6-3, (13-11) in 92 minutes at the Devonshire Park Lawn Tennis Club on Tuesday night.

Serena, a seven-time champion at SW19, has received a main draw wildcard to feature at the All England Club this summer, with qualifying already underway at the time of writing.

Ranking points will not be on offer for either the ATP nor WTA tours at this year’s third Major after the Slam’s controversial decision to ban Russian and Belarusian players from competing as a direct consequence of the ongoing war unfolding in Ukraine.

Too inactive to qualify through ranking alone (world no. 1204), the legendary American will nonetheless seek a strong and injury-free finish to a troublesome year that saw speculation intensify surrounding her future, amid retirement whispers ala Ashleigh Barty in March.

Well that was a whole lot of fun 😜

The pair of doubles both had match point opportunities, though it was the American-Tunisian duo who sealed their place in Wednesday’s quarter-final, to play Shuko Aoyama and Chan Hao-ching, after they beat Sania Mirza and Lucie Hradecka [4].

Speaking to Tennis Channel post-match, the 40-year-old spoke of the fun she had alongside Ons, while praising their opponents for playing their part in what was a high-level doubles match.

On how their partnership formed:

“I called her, she has been playing so well and I knew I needed to play some matches. She has always been so sweet to me on the Tour so I was like ‘it would be fun to play’.”

Ons, who led Olympic champion Belinda Bencic 6-3, 2-1 in the Berlin final on Sunday before an injury-enforced retirement saw her clinch her second WTA title of this year, has described her decision as smart – opting against playing both singles and doubles with a big few weeks ahead.

The 27-year-old spoke about feeling honoured to be selected: the first woman since now-retired Major winner Caroline Wozniacki, a close friend of Serena’s, to partner her in competitive tennis:

“I couldn’t believe it, to be honest. I was having dinner, it was crazy. It was so much fun, I was a little bit nervous before, playing with such a legend.

She made me [feel] really good on the court, even when I made mistakes she kept encouraging me so thank you for that.”

They’ll play again in less than 24 hours’ time and although building match sharpness is the goal for Serena, the competitive spirit burning within means both want to go all the way this week.