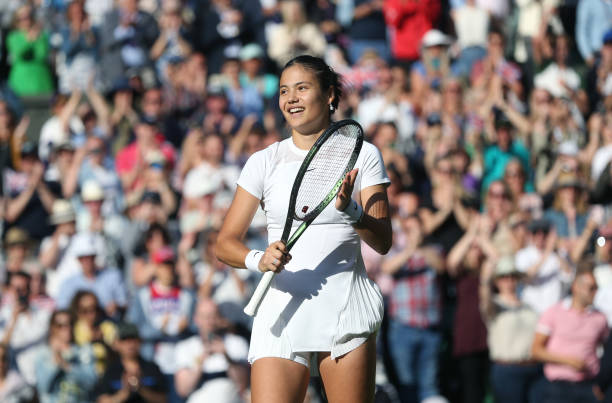 Novak Djokovic was tested en route to making more history, while Spanish rising star Carlos Alcaraz was embroiled in a five-set battle before Emma Raducanu held her nerve in a tricky R1 test against Belgium’s Alison van Uytvanck during a memorable Centre Court debut for the US Open champion. Read on for reviews and more, on what was another intriguing Day 1 on SW19. 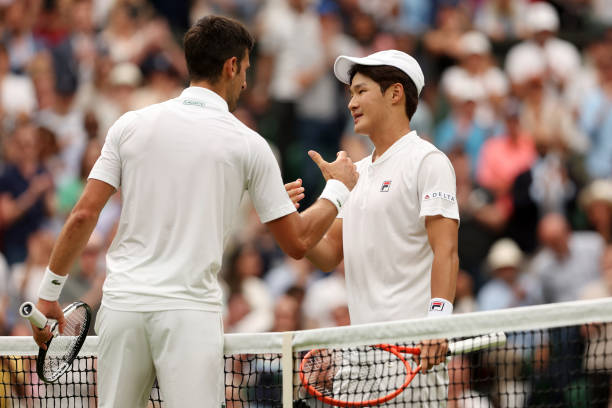 Soonwoo Kwon took a set off the defending champion, just like Jack Draper did in round one last year

Defending champion Novak Djokovic did it the hard way, but ultimately became the first player in the Open era to win at least 80 matches across all four Grand Slam tournaments after his gritty four-set win over Korea’s Soon-woo Kwon to open Centre Court on Monday afternoon.

Although he lost his world no. 1 ranking again after the ATP’s decision to strip points from the year’s third Major, the 35-year-old – a six time champion at Wimbledon – repeatedly found himself in some early bother against a motivated younger counterpart with nothing to lose.

“I am as dedicated as anyone out there… now that we’re at 80, let’s get to 100. I’m not one of the youngsters any more, but the love for this sport still burns in me and I try playing my best at Slams. It’s an honour and pleasure to be back.”

It was a timely and brave second serve, clocked at 113mph, which proved the catalyst for the Serbian as they were deadlocked at one set apiece and 2-2 in the third.

He saved a break point with the aforementioned shot, won three of the next four games and suddenly Kwon had scoreboard pressure placed back on him early in set four.

For all of the excellence he created early on, the 24-year-old’s motor and ability to return with such vigour faded late as Novak eventually turned up the heat.

Since retiring during his quarter-final with Tomas Berdych five years ago, Djokovic has won 22 matches straight on SW19 and remains perfect in first-round encounters (17-0).

It’ll be interesting to see if he starts better and can avoid trouble against Thanasi Kokkinakis on Wednesday, after the Australian’s straight-sets win over Poland’s Kamil Majchrzak. 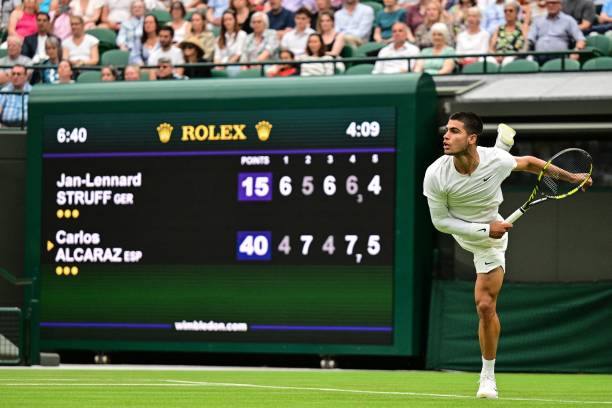 The scoreboard says it all, as Alcaraz serves during a back-and-forth tussle with Lennard-Struff

It wasn’t a vintage showing but Carlos Alcaraz’s problem-solving abilities were key as he twice recovered from a set down to outlast Germany’s Jan-Lennard Struff in another big battle.

It also means he has begun Wimbledon with five-set round one matches in consecutive years, having beaten Japanese lucky loser Yasutaka Uchiyama here last season.

“I feel pretty good, amazing for me [to have served 30 aces]. I didn’t expect to move as well as I did, still don’t know how I served [that well] today, probably my best match serving and that’s why I won for sure.

It means I like to play on grass, because I don’t wanna leave the court! It’s amazing, thanks everyone for the support.”

These were just a pick of the shots in their deciding set, which rather typified how well Struff played at times but conversely how Alcaraz eventually overcame those deadly serves by firing some of that ferocious firepower back in his direction frequently and deep in the court.

As Albert Ramos-Vinolas can attest, you have to finish him off while you have him wounded, otherwise he’ll punish you. The rising star faces a familiar foe in the Netherlands’ Tallon Griekspoor next on Wednesday, having split the H2H 1-1 in Montpellier and Estoril last year. 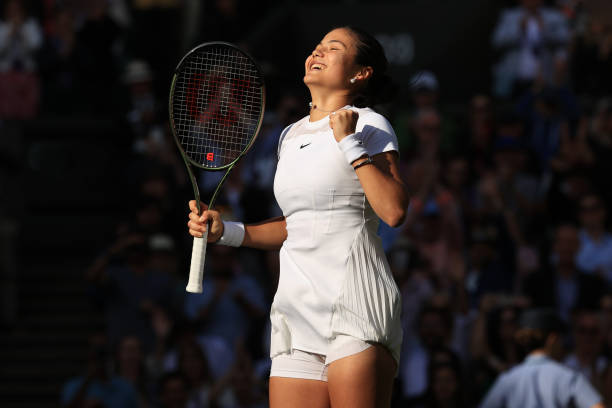 Close but successfully through: Raducanu celebrates her 6-4, 6-4 win over Van Uytvanck

It was a nip-and-tuck contest for sustained periods, but US Open champion Emma Raducanu seized the initiative and played the bigger points better against a tricky test in the form of Belgium’s Alison Van Uytvanck on her Centre Court debut after a whirlwind year for the teenager.

Both were firing makeable misses and giving one another opportunities to build momentum as the contest went long, though neither looked particularly comfortable when leading.

Alison saved a whopping six break points to hold at 1-0 in set two, before showing great resilience under pressure to take a 3-1 lead. As soon as she got the break (clip one), more messy ball-striking like this second clip saw it relinquished almost immediately afterwards.

Even though she’s not at 100% and has endured an inconsistent first full year on tour, you can’t afford to gift-wrap Raducanu opportunities like these when the match is close. She didn’t need many chances to pounce and eventually closed it out with a deft touch at the net:

other Results, as seeds fall and Murray makes winning return 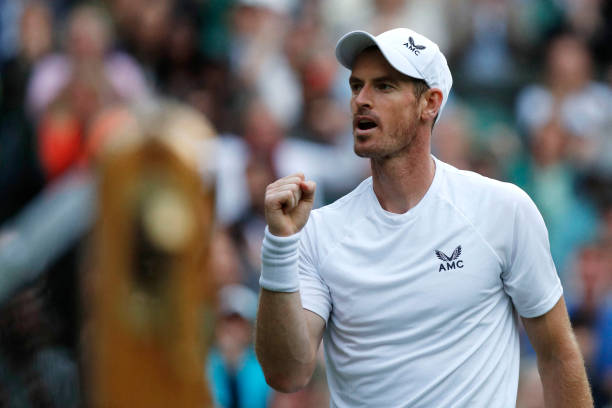 Murray was tested by Australia’s James Duckworth, but importantly came through in four sets

Andy Murray was made to work hard for it, but eventually got the better of Australia’s James Duckworth, winning 4-6, 6-3, 6-2, 6-4 to finish the evening’s play on Centre Court.

Ons Jabeur [3] ensured there was to be no repeat of her surprising French Open first-round collapse, dropping just four games against Swedish qualifier Mirjam Bjorklund.

Tamara Korpatsch vs. Heather Watson was suspended with the contest finely poised at one set apiece overnight, with the encounter now set to be finished mid-afternoon on Tuesday after the Brit showed steely resilience to level the scoring having somehow lost the first set in a tiebreak.

Cameron Norrie [9] raced through to beat Spanish veteran Pablo Andújar 6-0, 7-6, 6-3 early on Day 1, while Anett Kontaveit [2] and French Open runner-up Casper Ruud [3] were among those highly-ranked seeds also safely through into Wednesday’s set of second-round matches.

Matches to watch out for on Day 2 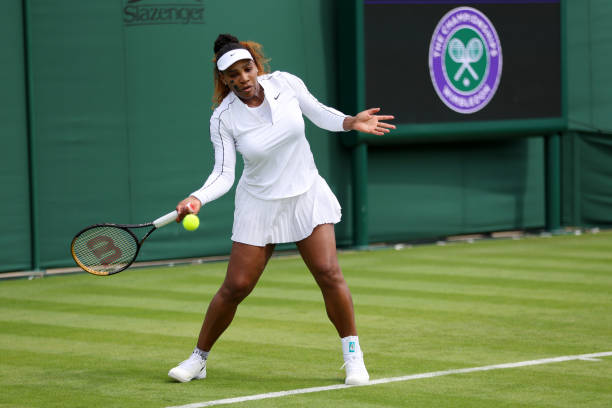 Serena will make her return at the same tournament she last appeared in, twelve months ago

Tomorrow's order of play for the main courts

An unchanged star lineup for CC.