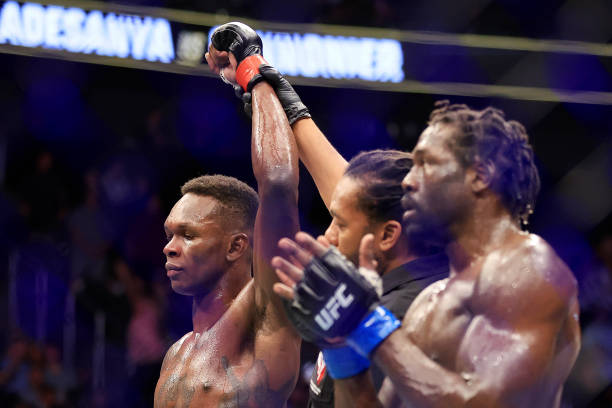 Israel Adesanya made the fifth defence of his middleweight title against Jared Cannonier, on an evening where the champion’s next challenge presented itself: former kickboxing foe Alex Pereira, who thunderously ended #4 ranked Sean Strickland’s four-year unbeaten run. In the co-main event, featherweight titlist Alexander Volkanovski closed the chapter on his Max Holloway trilogy with a one-sided UD win before stressing a desire to move up to lightweight. 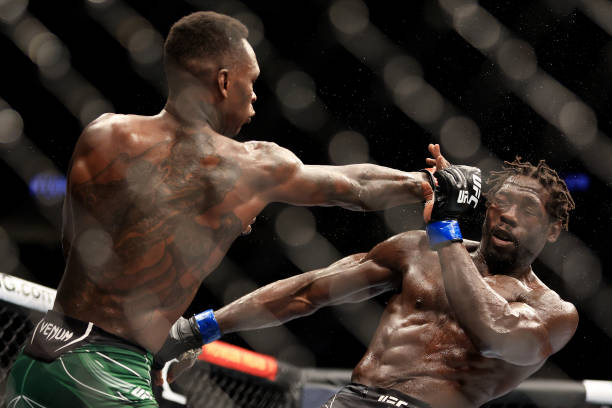 Adesanya spoke about wanting to put on a show and his Undertaker entrance – with WWE brass sitting cageside – felt fitting as the crowd enjoyed it. Whether he could produce the big show that he’s longed for, was another question entirely, and finding the answer isn’t always down to him.

The champion began with leg kicks and subtle point-scoring in the early going, while Cannonier was unafraid to impose himself but also remained patient. Joe Rogan on commentary described it as downloading data, like Vasiliy Lomachenko and Terence Crawford among others do.

It was a measured, tactical start by both but one which gradually gave Adesanya the initiative: Cannonier was defensively responsible and subtly landed effective leg kicks through R1, though the striking distance between them favoured the champion’s reach advantage.

That was something stressed in the Cannonier corner between rounds, as Adesanya gradually got more aggressive and purposeful with his movements.

The jab flowed well and just when Adesanya was pushing him back intently, an inadvertent eye poke and minute-long break halted said progress late in R2 as referee Herb Dean gave Israel a stern warning for outstretched fingers.

Warning heeded, the slow-mo replays confirmed what was happening to the challenger:  repeatedly popped by the jab – both to the head and body – though Cannonier responded by closing the distance and producing some encouraging level changes, landing strikes in R3.

Giving the champion another offensive weapon and something else to think about was key, as Cannonier clinched him up against the fence before connecting on multiple scoring knees.

Into the championship rounds they went, Adesanya continuing to land his jab frequently while staying spatially aware. Cannonier needed to maintain a frantic pace but spent too much time trying to find openings, by which time Adesanya had already moved on to a different position.

The power, ferociousness and urgency he had threatened wasn’t on display besides brief flashes and the T-Mobile Arena crowd let him hear it as Jared’s takedown attempts went unrewarded.

So did his corner before the fifth and final round, as they stressed their belief he was down 3-1 and needed a finish to realise this championship dream. Instead of throwing some reckless abandon, he did what Marvin Vettori was blasted for last summer, engaging in the clinch.

Cannonier landed two looping shots to sting the champion in the final minute, though it was too little too late after Adesanya’s improved takedown defence showed itself.

This wasn’t an exciting title defence but Israel did what he needed to: win. The debrief with head coach Eugene Bareman spoke volumes as you could hear “a little bit of an off-night,” picked up by the microphones in passing before he went over to commiserate the challenger’s corner.

"You're gonna get Frozen like Elsa"
– Israel Adesanya pic.twitter.com/xwXRircMJE

🇧🇷 Alex Pereira has ONE NAME on his mind after that result! #UFC276 pic.twitter.com/9zb0rRHIhg 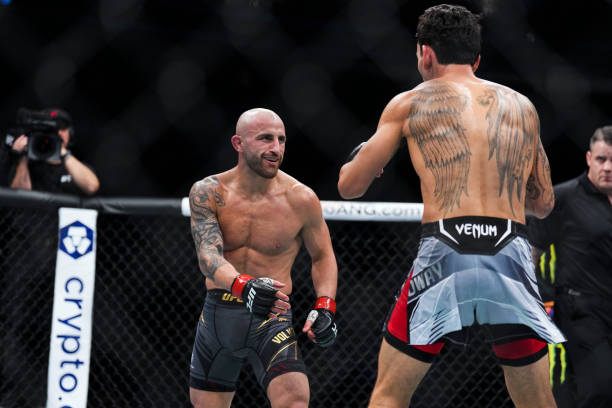 Backstage during a brief interview, Megan Olivi asked the champion why was he feeling so confident and how did the energy change during fight week here? Volkanovski responded the same unapologetic way: “I’m just better, and I’m going to go prove it again.”

If there was a hangover from their highly-debated rematch two years ago, Volkanovski wanted to prove that version of him had elevated to another level from the championship defences he’d logged in the time since: Brian Ortega and The Korean Zombie. He eased to victory here.

Initially, Holloway led the dance but Volkanovski was winging heavy-handed punches and not too far away from landing. His smirk said it all, as the champion’s striking was remarkably sharp early and Holloway needed to utilise head movement aplenty to swerve past most of it.

Talking trash, visibly amped and buoyed by a purposeful start, Volkanovski quickly found his flow state while Holloway – as evidenced by his corner’s concerned comments between rounds – struggled to find the range early and wasn’t active enough with movement nor striking output.

A series of looping right hooks landed clean for Volkanovski early in R2, before showcasing his strength by engaging in the clinch against the fence and landing some big elbows as they broke.

Speaking of right hooks, another bloodied Holloway’s left eye and as the commentators spotted it, the champion’s confidence couldn’t help but grow. A big inside low kick caught Max by surprise as he stumbled, and you could hear the Australian’s corner react with fervent applause.

R3 seemed competitive in stages, but it – like most of this matchup – largely was on Volkanovski’s terms as he let the jab flow and continued scoring shots with the cleaner boxing combos.

If ever you needed an example of his comfortability, watch this sequence deep into the fourth round:

Holloway wore the damage, with the cutman frantically trying to stop the bleeding, both eyes battered and bruised, but he needed a finish in the final five minutes. Easier said than done.

If he threw a strike first, Volkanovski would counter quickly and quite accurately. Bide time patiently and well, the champion responds by turning on cruise control — more jabs, pit-pat kicks, subtle head movement, easing towards a dominant UD win.

What now, he barked towards the broadcast booth after the final horn sounded. Very much like in boxing, when the commentators praise your tremendous toughness, it’s never a good sign. 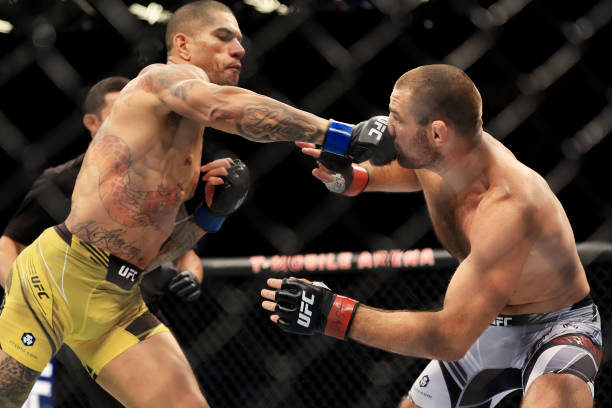 Sean Strickland’s bullish nature backfired big time, as the #4 ranked middleweight saw his six-fight winning streak snapped rather thunderously by Alex Pereira inside a round.

This was a stand-up encounter igniting quickly, though you’d argue Strickland played right into the Brazilian’s hands with his tactics here. Rather than commit to wrestling, or mix up his attacks, he was essentially caught following him and allowed Pereira a chance to establish range.

A perfect left hand dropped him, and the follow-up shots were an exclamation mark on a furious finish over within three minutes (R1, 2:36), catapulting a new title challenger top of the queue.

Never a good idea to stand in front of Pereira. Strickland’s ego got the best of him. pic.twitter.com/vSVlcCqVeY

#AlexPoatan has dynamite in his hands

At welterweight, Bryan Barberena’s durability proved key as he prevailed in a back-and-forth battle with Robbie Lawler, finishing the former champion deep into R2 of their frenetic clash.

In the main card opener at bantamweight, highly-rated Sean O’Malley will have to wait a little longer for an ascent towards the top at 135lbs.

Pedro Munhoz vs. Sean O'Malley was ruled a no contest after an unintentional eye poke at #UFC276 pic.twitter.com/hnk7UsST9Y

His competitive matchup with perennial contender Pedro Munhoz was abruptly stopped and deemed a no contest, after an accidental eyepoke rendered the Brazilian unable to continue. 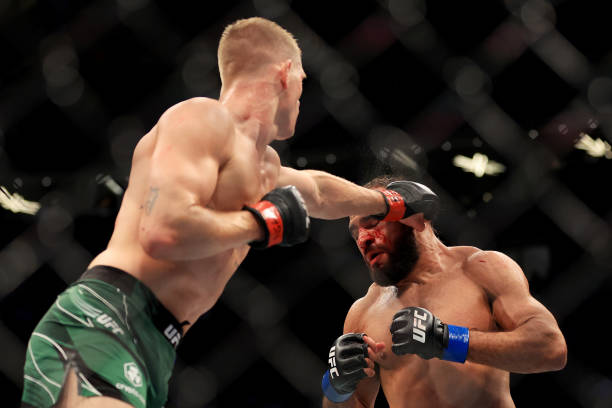 In the night’s featured co-main event at lightweight, Jalin Turner needed just 46 seconds to dismiss Brad Riddell with a guillotine choke submission win. The 27-year-old talent has now won five straight fights, all by stoppage, since a decision defeat by Matt Frevola in April 2019.

TURNER WASTED NO TIME GETTING THE SUB 😳 #UFC276 pic.twitter.com/1Dvyt0BA0S

In a rare legends showcase at welterweight, Jim Miller made history by becoming the promotion’s all-time leader in wins (24) and first to 40 fights after a second-round submission win over long-time lightweight contender Donald Cerrone – who retired in the cage post-fight.

Donald Cerrone lays down his gloves and hat in the Octagon at #UFC276 pic.twitter.com/1g7K6GX8OG

Elsewhere at 170lbs, Irish prospect Ian Garry is now 3-0 in the UFC after an encouraging showing (30-27 x 3) against Gabriel Green. Dricus du Plessis will have a number next to his name come Tuesday, having earned a UD win (29-28 x 3) win over Brad Tavares to start the ABC prelims.

🇮🇪 @IanGarryMMA putting it on Green under the bright lights! #UFC276 pic.twitter.com/eMC64bnQ8q

In the night’s opener, Julija Stoliarenko needed just 42 seconds to submit – and appearing to have seriously injured – Jessica-Rose Clark at women’s bantamweight.

Up next: UFC Vegas 58 on July 9, headlined by a lightweight clash between Rafael dos Anjos [7] and Rafael Fiziev [10]